On earth, that is, according to Pew study on modern medicine extending life to near-biblical lengths.
Abby Stocker|August 9, 2013 11:01 AM 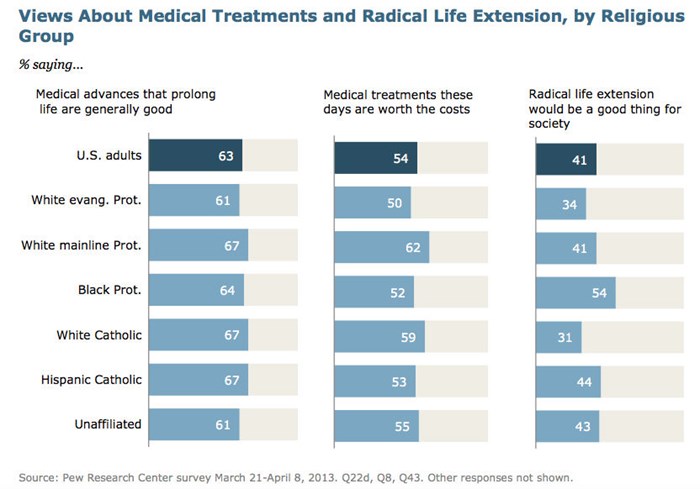 "This baby will live to be 120," proclaimed the cute yet provocative cover of National Geographic's May issue. Good news for the baby—but bad news for society, according to most white evangelicals.

Most agree that medical innovations that extend human life are a good thing. But a much smaller number percentage think that "radical life extension" would be as positive, according to a recent study by the Pew Research Center.

Only slightly more than a third of white evangelical Protestants (34%) say that procedures allowing humans to live for 120 years or longer would ultimately benefit society. Compare that to the 61 percent who think that "medical advances that prolong life are generally good" and the 50 percent who said that "medical treatments these days are worth the costs."

By contrast, white evangelicals who attend worship services weekly are half as likely to want treatments to live decades longer as those who attend services less often (22% vs. 40%).

As for evangelicals who would personally want to live much longer, aside from the larger benefits to society? Only 1 out of 4 said they would take advantage of such medical advances if available.

Pew also tapped religious groups for statements on the ethics of life extension.

Additionally, CT regularly covers discussion of death and dying—including whether faith prolongs suffering for cancer patients, and whether parents' prayers for their children's healing are inhumane.