Kaepernick, whose successful season has launched him into the national spotlight, made headlines last November when one Sporting News columnist criticized the quarterback's arm tattoos, likening the player to "inmates at California's state prison."

The commentary sparked response from other bloggers who came to Kaepernick's defense. But Kaepernick's adoptive parents also went straight to the media in support of their son's tattoos, pointing out that he "chose Bible verses and had them inscribed on his biceps." 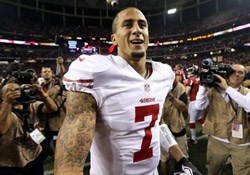 Tattooed 49ers QB Not the Only Controversial ...