President Obama Cites Exodus on Immigration Reform: 'We Were Strangers Once Too' 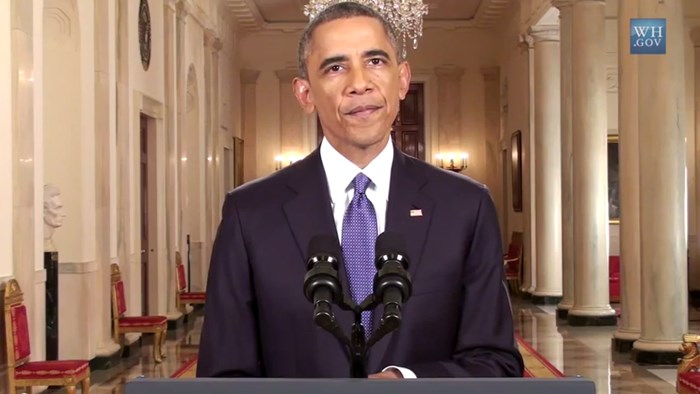 Update (Nov. 20): Tonight President Barack Obama outlined his executive action on immigration reform, which could impact up to 5 million immigrants. He gave two citations: one from former President George W. Bush, and one from Exodus 23.

The third point will prompt much debate (Vox summarizes the talking points on both sides). For initial details, read the President's full speech and the White House's summary. Or watch it:

Among the early reactions, World Relief's Jenny Yang—one of CT's 50 Women You Should Know who coauthored an influential book alluding to the same Old Testament passage—said Obama's action "will only provide a temporary solution" since the US Senate "took the right step forward in 2013 by passing a bill, but Congress was not able to finish the job."

"Congress should see the President’s actions as impetus to pass immigration reform that will supersede executive action as soon as possible," said Yang, vice president of advocacy and policy for World Relief. "Every day we wait, we see consequences on families and friends. What we need is a permanent answer to a system that isn’t working. Immigration is a defining feature of America’s history and will continue to be an important issue for America’s future. President Obama and members of both parties in Congress should heed the call to not just change our immigration laws but enforce them in a way that’s in the best interest of families and our country.”

Sam Rodriguez acknowledged that Obama's action was "not the preferable delivery mechanism," but described it as a "merciful action" because it "initiates a reconciliatory prescription necessary in addressing a defacto humanitarian crisis within our borders: millions of God's children created in his image living in the shadows."

"For years our government, under the leadership of both parties, failed miserably as it pertains to immigration," said Rodriguez, president of the National Hispanic Christian Leadership Conference. "For years, our elected officials sacrificed lives on the altar of political expediency. For years, rhetorical articulation fell short of redemptive action. For years, we as a nation stood by while families experienced separation, children suffered and national unity lay shattered.

"As an organization committed to both Christian compassion and the rule of law, we call upon Congress and President Obama to immediately work together in passing legislation that will permanently secure our borders, protect our values and facilitate a platform upon which once again we can shine as a 'city upon a hill,'" he continued. "By coming together on immigration we can; better yet, we will shine again."

Meanwhile, Russell Moore explained why he agrees with reforming the United States' "incoherent and unjust" immigration system, but disagrees with Obama's decision to "act unilaterally."

“On more than one occasion, I asked President Obama not to turn immigration reform into a red state/blue state issue," said Moore, president of the Ethics and Religious Liberty Commission. "I also asked him not to act unilaterally, but to work for consensus through the legislative process. Acting unilaterally threatens that consensus, and is the wrong thing to do.

"My hope is that the Republicans in Congress will not allow the President's actions here as a pretext for keeping in the rut of the status quo," he continued. "More importantly, I pray that our churches will transcend all of this posing and maneuvering that we see in Washington. Whatever our agreements and disagreements on immigration policy, we as the Body of Christ are those who see every human life as reflecting the image of God.”

Noel Castellanos has long "urg[ed] Congress to fix our broken immigration system based on the biblical principles of love for neighbor and human dignity," so he applauded Obama for "making good on his promise to give relief."

"Now it is time for Congress to finish the job by passing comprehensive immigration reform," said the CEO and president of the Christian Community Development Association. "Our nation as a whole, and our immigrant communities in particular are in desperate need of decisive action on immigration that will impact the well-being of our nation for generations to come."

Leith Anderson acknowledged that while the "president's announcement appears to offer important temporary help to many families, it is no substitute for congressional action that comprehensively fixes our broken immigration system."

"Congressional leaders — both those who applaud the President and those who oppose his actions — must come together to negotiate bipartisan solutions. We call on both sides to lower the rhetoric and get to work," the National Association of Evangelicals president said.

David Beckman said that his "support of the president’s action is not about partisan politics."

"It’s about millions of families who will have some respite from worry and new opportunities to work their way out of poverty," said the president of Bread for the World. "It is about our faith; the Bible is clear on how we should treat immigrants. It is one piece of our commitment to opportunity for all people."

CT has previously looked at how Bible verses on "welcoming the stranger" apply to America's immigration debate and reviewed Yang and Matthew Soerens's book of the same name, among other coverage of immigration reform. Her.meneutics looks at what to do when you don't know a family's immigration status.

Below, a recent LifeWay Research sheds light on how Protestant pastors feel about immigration reform.

[Originally published November 18, 2:01 p.m., entitled, "How 1,000 Protestant Pastors Feel About Immigrants and Reform | Survey finds most want a mix of justice and mercy.]

With political tensions over immigration rapidly rising, recent research offers an update on what Protestant pastors think about the issue.

White House officials have suggested that President Barack Obama may take executive action to pass immigration reform as early as this week, blaming House Republicans for gridlock on pending legislation already passed by the Senate. The GOP now holds a majority in both congressional chambers, and House speaker John Boehner has made it clear that the party has no intention to pass a bill that Obama could sign in the next legislative session.

According to a survey released today by LifeWay Research, the nation’s Protestant senior pastors want the U.S. government to mix justice with mercy when it comes to immigration reform.

Most say it's the government’s job to stop people from entering the country illegally. They also support reform that includes a path to citizenship for illegal immigrants already in the country. And they believe Christians should help immigrants, no matter what their legal status.

Those are among the findings of a new survey of 1,000 Protestant senior pastors queried prior to the mid-term elections.

“This is one of many cases in which Christians can look at those around them and say, ‘I don’t agree with what got you to this place in life, but I will love you while you are here,’” he said. 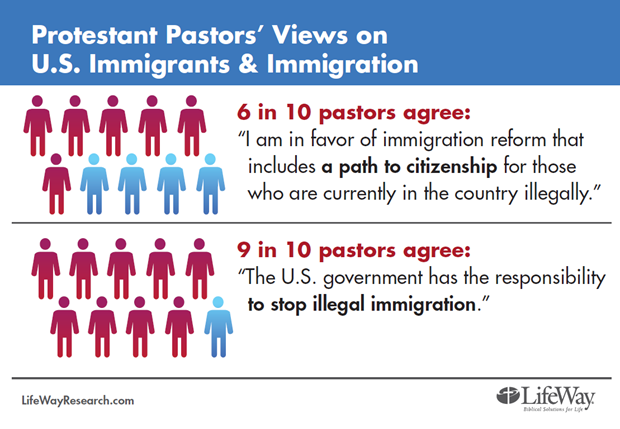 Nearly 6 in 10 of Protestant senior pastors (58 percent) agree with the statement: “I am in favor of immigration reform that includes a path to citizenship for those who are currently in the country illegally.” About a third (34 percent) disagree. Seven percent are not sure.

Most African-American pastors (80 percent) agree, as do a majority of white pastors (59 percent). Two-thirds (68 percent) of mainline pastors and more than half (54 percent) of evangelical pastors also favor a path to citizenship.

About half (47 percent) of Protestant senior pastors say their church currently helps immigrants.

And most (79 percent) agree with the statement: “Christians have a responsibility to assist immigrants, even if they are in the country illegally.” One in 6 (17 percent) disagree. 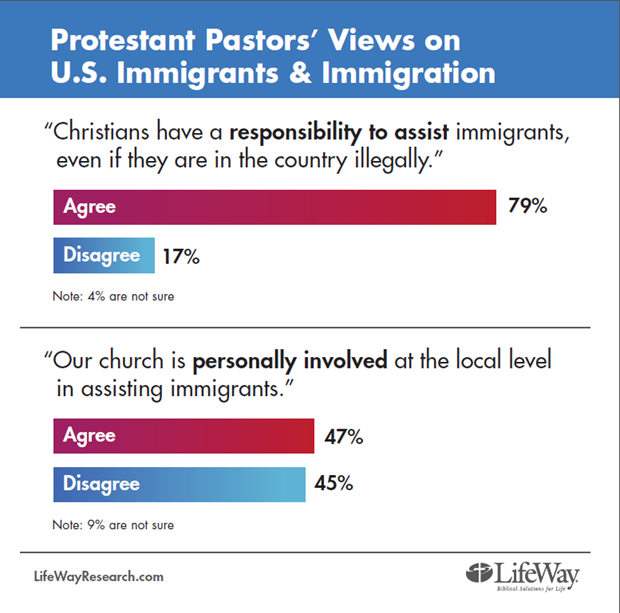 The new study parallels the findings of a 2013 LifeWay Research survey,

In that poll, 58 percent of pastors supported immigration reform. And about half (51 percent) said reform would help their church or denomination reach Hispanic Americans.

Other recent polling found that people in the pews have similar views to their pastors on the issue of immigration reform.

A 2014 Pew Research poll found that about two-third of Protestants (69 percent) support reform that would allow undocumented immigrant to stay in the country if they meet certain conditions. Three-quarters of Catholics (77 percent) also support reform.

Pew also found that less than half of Protestants (46 percent) say it is important that reform happens this year.

Protestant pastors of all kinds want the government to do a better job preventing people from entering the country illegally.

Almost 9 in 10 (87 percent) agree with the statement: “The U.S. government has the responsibility to stop illegal immigration.”

The phone survey of Protestant pastors was conducted Sept. 11-18, 2014. The calling list was a stratified random sample drawn from a list of all Protestant churches. Each interview was conducted with the senior pastor, minister or priest of the church called. Responses were weighted by region to more accurately reflect the population. The completed sample is 1,000 surveys. The sample provides 95 percent confidence that the sampling error does not exceed plus or minus 3.1 percent. Margins of error are higher in sub-groups.

President Obama Cites Exodus on Immigration Reform: 'We Were Strangers Once Too'