(UPDATED) Here's the final tally of the top 100 choices of 2016, plus charts on how Lenten abstinence has changed over time.
Morgan Lee|February 5, 2016 01:01 PM
Image: Dick Thomas Johnson, Pabak Sarkar, KT King, Joshua Rappeneker / Flickr
What to Give Up for Lent 2016? Consider Twitter's Top Ideas

Jesus instructed his followers to pray and fast in secret. Someone must have told Twitter.

Last year, more than 400,000 people tweeted what they were giving up during the week of Ash Wednesday. The top five choices: school, chocolate, Twitter itself, alcohol, and social networking.

But when Lent 2016 kicked off last week, only 200,000 tweets mentioned Lent, although the top five topics themselves were identical to 2015.

What Twitters users said they gave up for Lent in 2016.

"I don’t know whether people are using Twitter less or if Twitter is throttling the data available in their API," wrote OpenBible.info’s Stephen Smith, who analyzes the numbers each year. "Either way, much less data is available this year than last."

Once again, tweets nodded to current events, including the presidential campaigns of the most (and least) popular candidates.

"Presidential candidate Donald Trump came in at #82, while 'running for president' came in at #84, referring to the withdrawal of candidates Chris Christie and Carly Fiorina from the race after disappointing results in New Hampshire," wrote Smith. "'Politics' came in at #91."

"[The] big gainers this year are 'indifference,' at #51, and 'being petty' at #59," wrote Smith. "The former follows Pope Francis’s Lent message from last year, which a few media outlets picked up this year."

Below are some charts, courtesy of OpenBible.info, on how topics have changed over time. 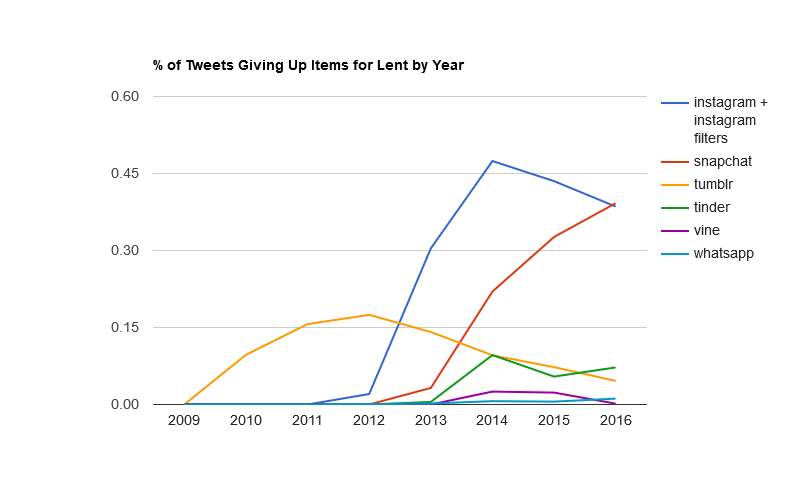 Here's one attempt at tracking the "seven deadly sins": 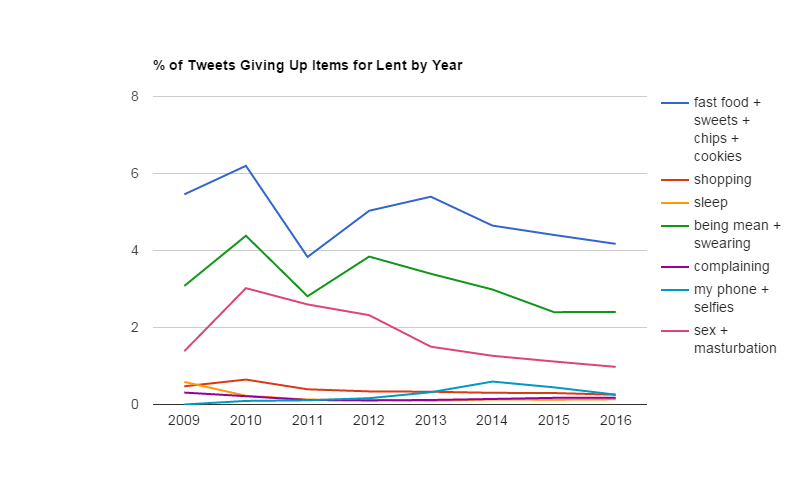 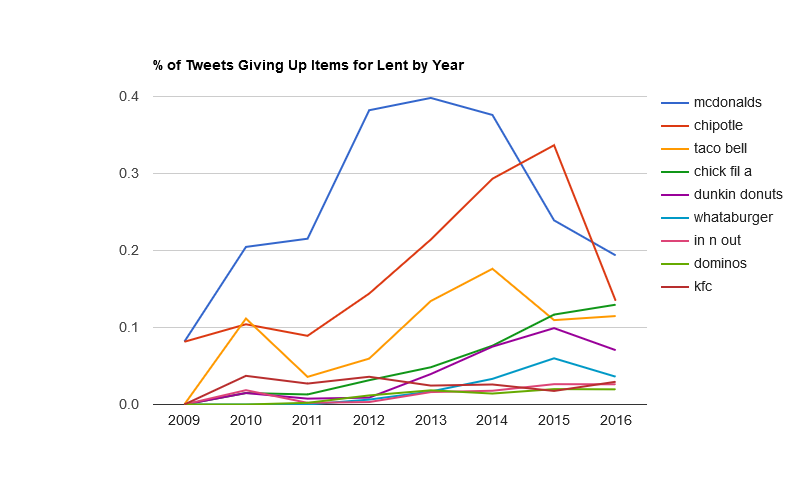 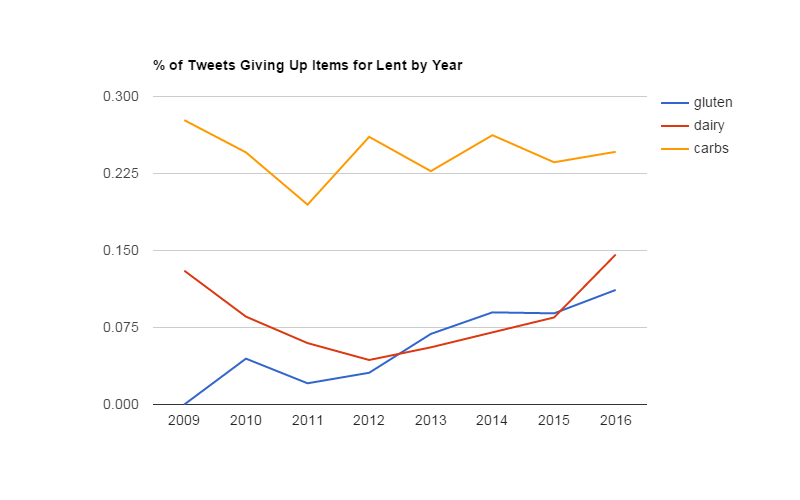 Hot Cheetos appeared in the top 100 last year, the only namebrand snack to crack the list: 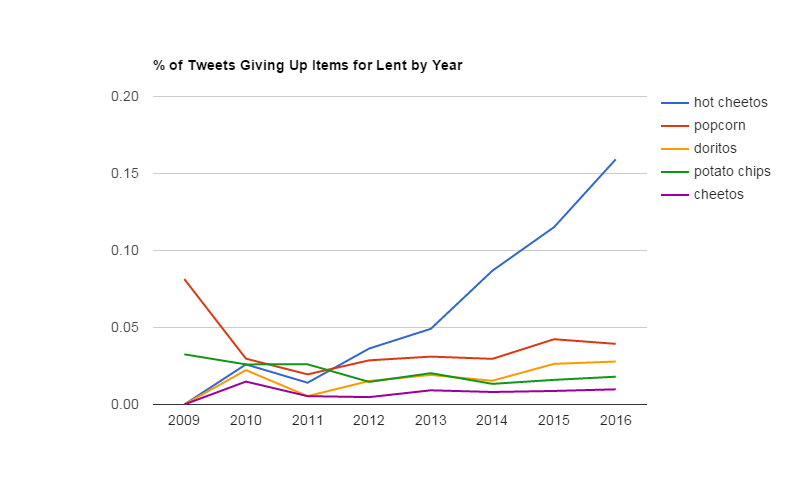 Few Lenten tweets mentioned sarcasm or complaining, but for two years in a row, at least 8,000 suggested swearing off swearing: 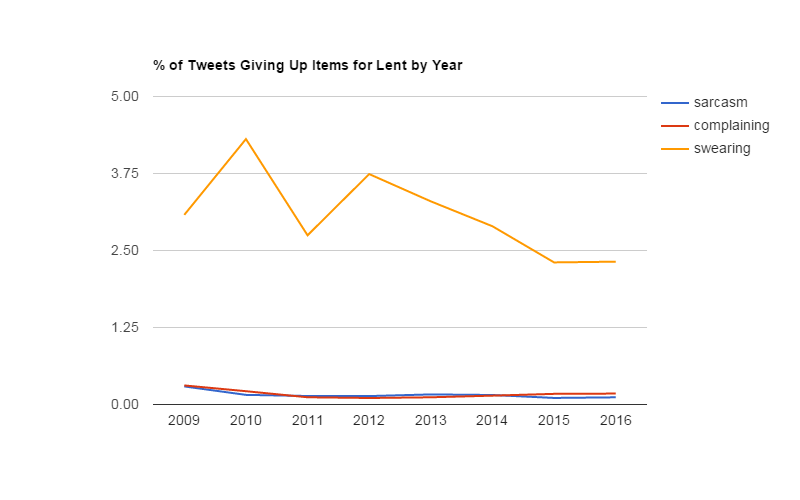 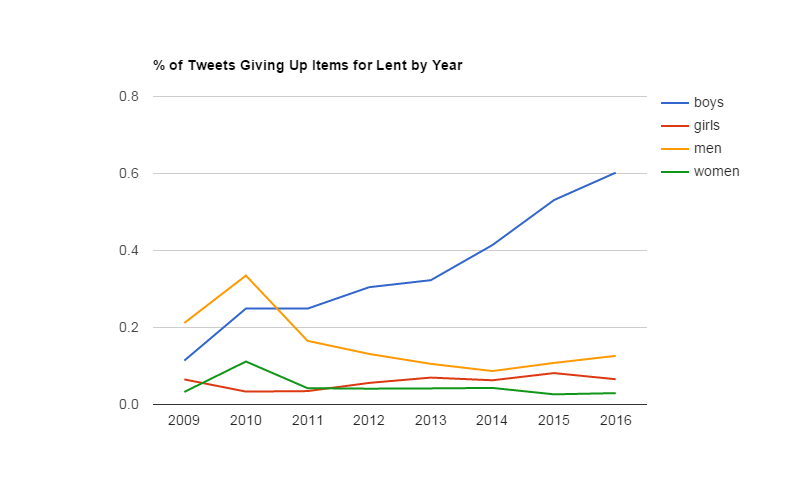 Here is Smith's final total of the top 100 most-mentioned Lenten sacrifices (both serious and cynical) in 2016. (The list covers tweets from February 7 to 13 that mention giving up something for Lent and, except as noted, excludes retweets.)