Dual delays on efforts to honor 'America's pastor,' while researchers rank his admiration in 30 countries.
Sarah Eekhoff Zylstra
June 09, 2016 11:31 AM 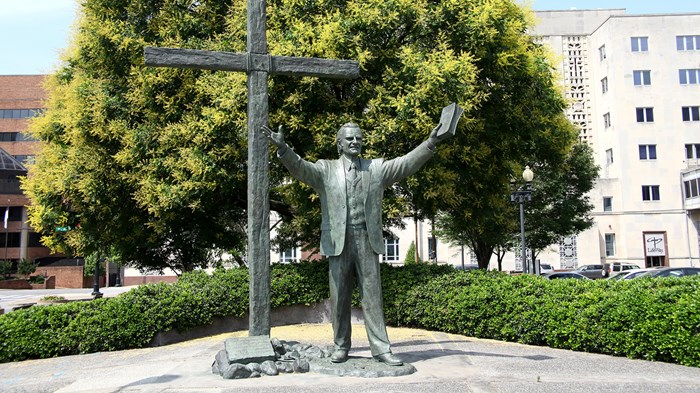 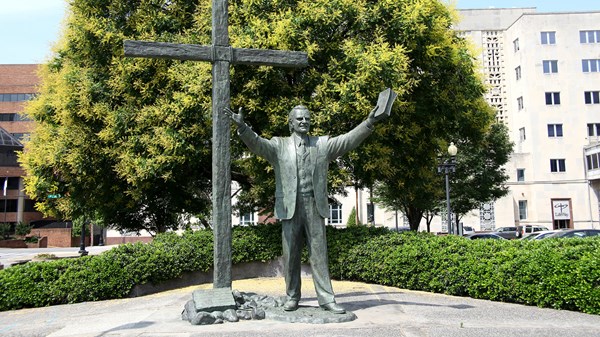 Yesterday, contractors working to dismantle the familiar 9-foot statue of Billy Graham outside of LifeWay Christian Resources in Nashville ran into trouble.

LifeWay, which sold its 15-acre downtown campus last year, plans to move the statue to the entrance of its Ridgecrest Conference Center near Graham’s home in North Carolina.

But today the statue still stands in Nashville, delayed “because it was attached to the ground differently than expected,” LifeWay stated. The removal has been rescheduled for June 25, LifeWay spokesperson Marty King told CT.

It was secured by grout, reportedThe Tennessean.

When the statue does come down, it will be stored until its new site is ready in the fall. LifeWay’s new headquarters is only three acres, making the mountain retreat “the most optimal location,” King told the Nashville newspaper.

The statue depicts Graham in a three-piece suit, standing by a 17-foot cross. His arms are outstretched; his left hand is wrapped around a Bible. The piece was sculpted by pastor Terrell O’Brien and donated to LifeWay by two Southern Baptist businessmen in 2006.

“Ridgecrest is a perfect location for the Graham statue,” stated LifeWay president and CEO Thom S. Rainer. “It is only a few miles from the home where Mr. Graham has lived most of his life, and it will welcome nearly 70,000 men and women, boys and girls who come to Ridgecrest every year for spiritual training and retreat.”

This isn’t the only Graham statue to be delayed.

That statue will also have to wait, because policy dictates that the honor is a posthumous one. Graham, 97, still lives at his home in North Carolina.

“We’re certainly not trying to hasten anything,” Charles Jeter, who sponsored the bill in the North Carolina legislature, told the Charlotte Observer. “We hope Rev. Graham lives a long time. But we can get the authorizing language, and more importantly get the fundraising started.”

Jeter expects the money will be raised by private donations: “We don’t intend to have the state pay for this.”

Despite his age and relative reclusively, Graham is the 16th most admired man in the world, according to a 2016 YouGov poll. He ranks after Bill Gates (No. 1), the Dalai Lama (No. 8), and Pope Francis (No. 13), but ahead of Donald Trump (No. 18) and Bernie Sanders (No. 20). (The chart below shows how he fared in each country YouGov surveyed.)

Graham has been among the top 10 most admired men every year since 1955 except for 1962, in addition to 1976 when Gallup did not ask the question. Despite that impressive record, he has never placed first, but ranked second from 1969 through 1974 and again in 1997 and 1999. Graham is now 97 and generally out of the public eye, but still this year made the cutoff for the top 10.