Pew: Amid growing awareness of discrimination, anti-Semitism has spiked the most. 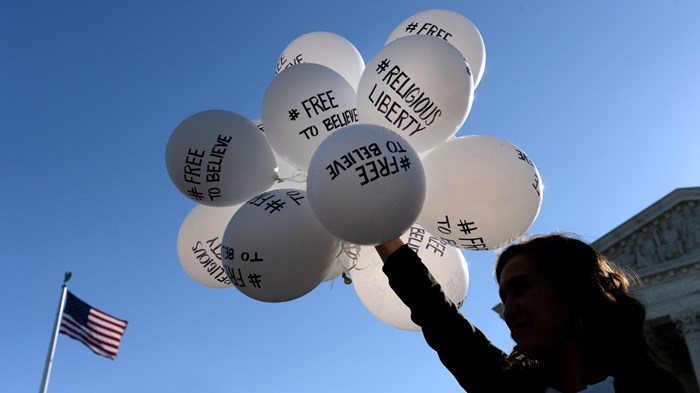 Though evangelical Protestants remain the largest faith group in the country, as clashes over their beliefs turn up in the public square, half the country has come to believe evangelicals face discrimination in the US.

A new report from the Pew Research Center reveals that Americans see discrimination on the rise or holding steady across demographic groups, with evangelical Christians and Jews experiencing a significant uptick over the past few years.

It’s easy to see the reasons for the shift. Last October, a shooting at a Pittsburgh synagogue killed 11 worshipers and became the deadliest anti-Semitic act in American history. The year before, anti-Semitic hate crimes rose 37 percent, marking the third consecutive year with a spike in attacks on Jews.

Evangelicals, meanwhile, have a more precarious place in the spotlight as their views on social issues like marriage and sexuality have grown less popular. Previous Pew surveys indicated white evangelicals’ public reputation has been on the decline since 2014, while other research has shown those with “anti-Christian hostility” are now in more prominent positions to enforce their views.

Recently, some evangelicals have grown concerned over perceptions of unfair treatment in various settings, like politics, schools, Hollywood, and social media—like when the Twitter account for the pro-life Christian film Unplanned was pulled from the site, or when a student government representative at Berkeley lost club membership and was called on to resign for declining to vote against her Christian views on sexuality and gender.

“There’s more explicit hostility toward Christians in some sectors of power—that is real and not imagined,” Russell Moore, president of the Southern Baptist Convention’s Ethics and Religious Liberty Commission, told CT in 2017, citing Mozilla CEO Brendan Eich’s resignation in 2014 and more recent scrutiny over federal appointees with conservative Christian beliefs. “There’s always a tendency to have a siege mentality and to imagine that people hate us, when they’re just not thinking about us at all. But I do think there are several examples where that’s the case.”

Even among evangelicals, there’s some debate over how to discuss the type of bias or discrimination they face in America.

“It seems that today, Christians must think through their cultural position more carefully than at any other point in US history,” wrote K. A. Ellis, a Christian leader and scholar whose expertise is in the global church. “Still, given the terrible persecution of Christians overseas, I wonder whether it’s accurate to say that American Christians are ‘under persecution.’ When I discuss the rise in anti-Christian hostility in the States, I avoid the ‘p word,’ and I don’t make comparisons to other parts of the world.” (A related discussion has taken off again, in response to the recent attacks in Sri Lanka.)

In most Americans’ minds, evangelicals’ cultural war conflicts also don’t rise to the level of bias toward Muslims, who are seen as the demographic that faces the most discrimination in the US. A full 82 percent of Americans—steady over the past three years—recognize anti-Muslim discrimination. Well over half of Americans (56%) go so far as to say Muslims encounter “a lot” of discrimination—more than 10 percentage points above blacks, the next highest group. 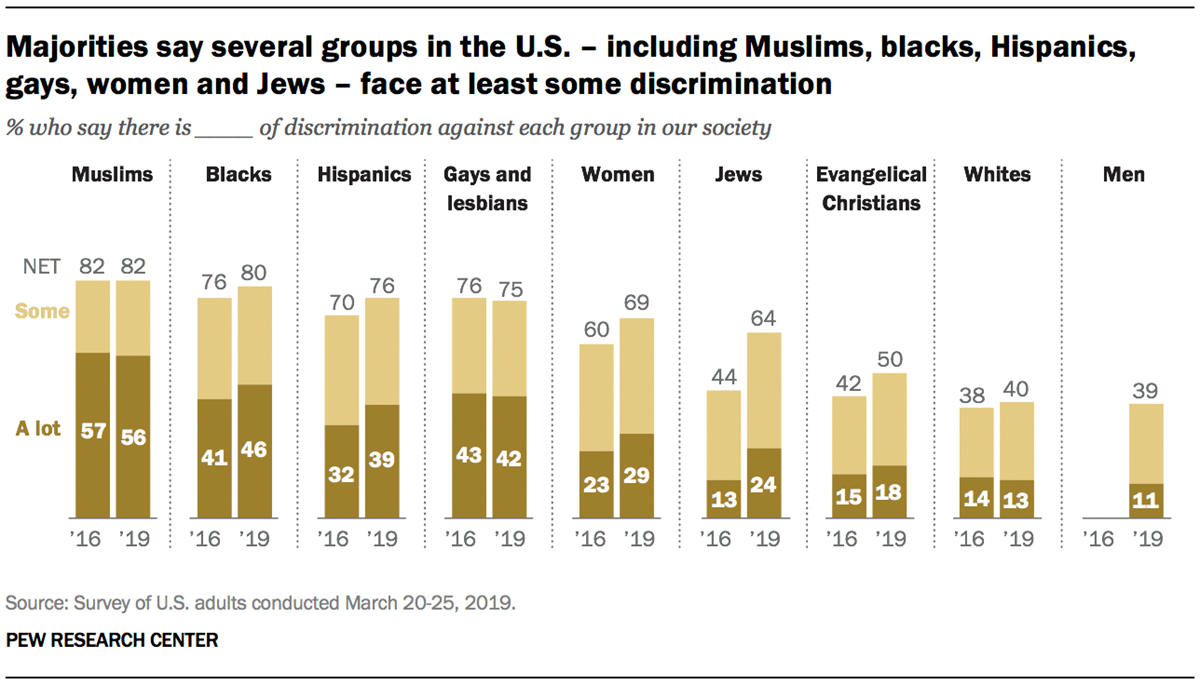 Blacks, Hispanics, and gays and lesbians are perceived to be the other demographics facing the most discrimination in America. In general, Americans see levels of discrimination holding strong or increasing, with discrimination against women also on the rise.

Americans’ perceptions of discrimination tend to be partisan. For instance, 7 in 10 Americans on the political right say evangelical Christians are subject to discrimination, while less than half as many (32%) left-leaning Americans agree.

“Majorities in both partisan groups say there is at least some discrimination against many groups, including Muslims, blacks, gays and lesbians, and Hispanics,” state Pew researchers. “But the share of Democrats who say each of these groups face discrimination is significantly higher than the share of Republicans who say the same.”

Both Democrats and Republicans are growing more concerned about anti-Semitic discrimination, though those on the left are still 15 percentage points more likely to see discrimination against Jews than their right-leaning counterparts.

According to the study’s authors, “Among members of both parties, the shares saying there is a lot of discrimination against Jews has roughly doubled since 2016—from 15 percent to 28 percent among Democrats and from 9 percent to 20 percent among Republicans.”