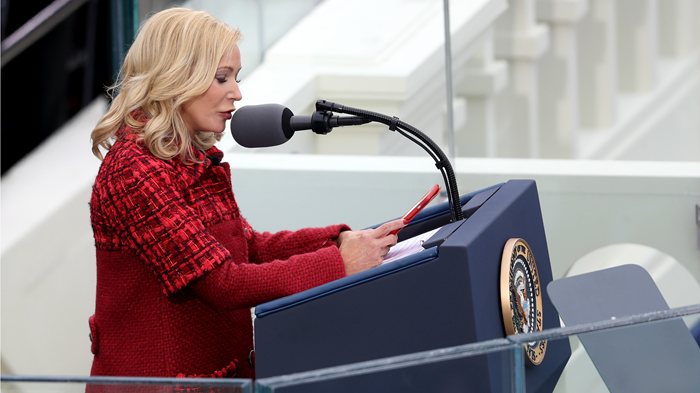 White, a Florida televangelist often associated with the prosperity gospel, joins the administration’s outreach efforts through the Faith and Opportunity Initiative, the Times wrote. Formed last year through an executive order, the initiative set out to deepen faith-based partnerships, particularly around poverty relief, and to protect religious liberty on the federal level.

White, who met Trump 17 years ago through her televised sermons, was among the 25 evangelical advisers who joined his campaign in 2016. She visits with the president regularly to pray and discuss faith and politics. This year, she appeared with the president during several official events, including his religious liberty address to the UN and a White House gathering of persecuted religious minorities from around the world.

White has not made an announcement or confirmed the appointment on social media. She stepped down from her church in Orlando in May.

Before praying at Trump’s inauguration in 2017, she told CT there was a “possibility” she would assume an official White House role. After more than two years of prayer breakfasts, National Day of Prayer ceremonies, and Oval Office prayer meetings, the controversial but popular preacher has reportedly done just that.

The Faith and Opportunity Initiative was announced in May 2018, the first move to formalizing the Trump administration’s faith efforts. President George W. Bush established the first faith-based initiatives office in 2001, and Barack Obama renamed and reconfigured it as the White House Office of Faith-Based and Neighborhood Partnerships in 2009. In his first month as president, Obama appointed Pentecostal minister Joshua DuBois, then 26, to oversee relationships with clergy and faith groups.

Melissa Rogers, with Obama’s faith outreach office, shared her advice for White with RNS: “Form partnerships with faith-based and humanitarian organizations to serve people in need. Do so by partnering with organizations that reflect diverse faiths and beliefs. And do this work in a way that is consistent with the Constitution.”

In contrast to the formal faith advisory council established by his predecessor, Trump’s religious ties have remained unofficial and ad hoc. Evangelicals like Johnnie Moore have said there is an “open door” for them at the White House.

As of Friday morning, none of the pastors who gathered with White to pray for the president earlier this week had publicly acknowledged the New York Times report naming her to an official White House post.

White considers herself the bridge-builder introducing Trump to evangelical leaders, as she described her unofficial role in a 2017 interview with CT. Her relationship with the president has also been controversial among evangelicals who theologically oppose what they deem the “name it and claim it” approach of with the Word of Faith movement.

Moore commended the role White has played so far. “She has also been a very effective liaison to many types of Christians and deserves a great deal of credit for her role in advancing a bi-partisan policy agenda,” he said in an email to CT Friday afternoon, listing her involvement in efforts for religious liberty protections, pro-life policies, criminal justice reform, and more.

He noted, “Total theological congruence is not a prerequisite for cooperation in advancing the common good.”

Just last week, prior to the news of her official role, professors Leah Payne and Aaron Griffith wrote for CT, “For those who do not share her theological disposition, it is wishful thinking to pretend that she is not a major force within American evangelicalism. It is now Paula White-Cain’s world. The question is how we should live in it.”

White’s most recent book drew endorsements from several fellow Trump advisers, including Southern Baptist like Robert Jeffress, Jack Graham, and Jerry Falwell Jr., which came as a surprise to some Christians who see White as doctrinally divergent from mainstream evangelicalism.

“You’d be hard-pressed to see someone like Jerry Falwell and Billy Graham cozying up to Paula White. The lines are being blurred with their sons,” Michael Horton, theology professor at Westminster Seminary, told CT in 2017. “I think that people like White and [Joel] Osteen are able to tone down the heretical aspects of the Word of Faith teaching, but make no mistake: the toxic doctrines are there.”

Critics also raise concerns over White’s financial background since she was among the televangelists investigated by Senator Chuck Grassley over a decade ago. The inquiry into possible misuse of ministry donations, White has repeatedly stated, never found any wrongdoing. But officials also never obtained sufficient documentation to complete their probe and instead handed over the accountability effort to the Evangelical Council for Financial Accountability.

White left her pulpit, a mostly African American congregation in Orlando, in May—stepping back to assume an oversight role while she continues to grow Paula White Ministries, with talk of plans to plant churches and establish a university. Some had reported that her Trump ties had hurt her reputation among the black community.

White has a daily program on the Christian television network Daystar, Paula Today, where she appears alongside her husband, Journey singer Jonathan Cain. (Cain is the 53-year-old’s third husband; her 2007 divorce from pastor Randy White has become a part of her testimony.)

As the news of her new role broke, White tweeted, “Keep your dream away from the doubters, haters & complainers! Don't let anything destroy what you can do!” and then, “God will put you at the right place on the right day to meet the right person!,” the latest in a string of exclamation-filled affirmations that fill her feed almost hourly.