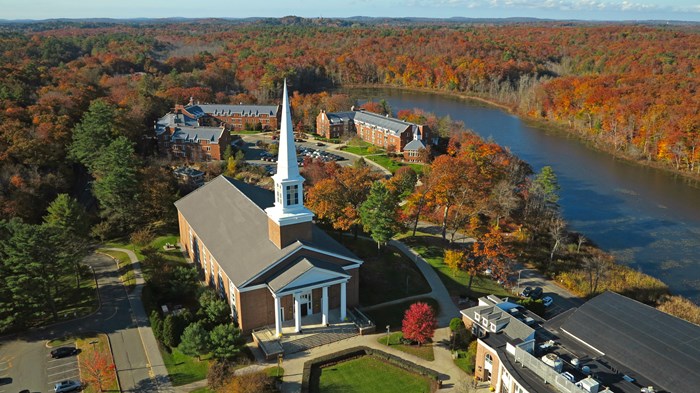 A record-setting $75.5 million donation stands to change the trajectory of Gordon College by boosting scholarship funds to make the school more affordable and expanding opportunities for non-traditional students.

The anonymous gift—the largest in the school’s history and among the largest ever given to a Christian college—is an answered prayer. And it comes just at the right time. Higher education faces looming questions about its future, and Gordon began to implement major academic changes around a realigned budget last spring.

The recent donation “was as a sign of God’s redemptive love for Christian education in the context of great challenges and opposition,” said Gordon president (and CT board member) D. Michael Lindsay. Lindsay spent four years asking God to bring a “transformational donor” to the evangelical liberal arts college. This summer, it finally happened.

Lindsay shared the news with the student body Friday at the Boston-area college’s homecoming and 130th anniversary celebration. The gift, which is designated for Gordon’s endowment, puts the school more than halfway to a campaign goal of raising $130 million over the next couple years. Right away, students enrolling in 2020 will receive an additional 15 percent in financial aid.

Donations this big tend to go to Ivy League schools and state research universities. According to data compiled by the Almanac of Higher Education, only a handful of evangelical colleges—including Regent University, Liberty University, Oral Roberts University, and Westmont College—have ever received gifts over $70 million.

“The number one reason why donors make big gifts, like extraordinary gifts, to a Christian college is that they believe a faith-infused education is the hope of the world,” said Shirley Hoogstra, president of the Council for Christian Colleges and Universities (CCCU).

Gordon officials told CT that the anonymous donor was particularly interested in helping address affordability, which has been an issue for Gordon. The liberal arts college’s $38,650 annual tuition is close to average for private colleges, but on the high end among CCCU member schools, whose mean tuition is around $27,700.

Back in May, WBUR in Boston reported that while total enrollment has been steady, “Gordon has struggled as of late to attract students to campus and to keep them there. In 2017, only 16 percent of the 2,500 students it admitted ended up enrolling—and every year, the college watches, on average, as one in seven of its students leave campus.” School officials said cost was the biggest factor.

It was a major consideration for Matt McEathron when he applied to the school a few years ago. His parents had already put his three older brothers through college. “In a large family, affordability’s obviously super-important,” said McEathron, an economics major in his junior year. “Gordon did a really generous job proving scholarships for me that made it possible for me to be here.”

The student body currently sits just below 2,000, with 1,489 undergraduate and 337 graduate students. Gordon gives nearly all of them some financial aid—last year, institutional scholarships and grants totaled $29.9 million. The recent donation will up that amount by 15 percent, with merit scholarships increasing by up to a third.

The historic investment in Gordon comes as the school undergoes what Lindsay called its most significant academic restructuring in 50 years. Last spring, the college announced plans to consolidate certain majors and departments to better match student demand. For example, political science, philosophy, and history were combined into a single department, though each will remain a distinct major.

In addition, the school said it would expand graduate programs, partnerships, and online education. A $10 million donation made in May helped fund Gordan Global, a platform for online education through its new School of Graduate, Professional, and Extended Studies.

As a result of the changes and budget cuts, 17 faculty members and six staff members were laid off, and more than a dozen other unfilled positions were eliminated.

While some alumni as well as outsiders questioned the move, worried the school was losing its liberal arts distinctives, Lindsay and fellow Gordon administrators saw the adjustments as a proactive way to avoid financial strain in the future, to set the school up for sustainability.

While plenty are excited about the new approach—McEathron remarked about how he’s seen the college emphasize a more “holistic” educational experience—change can be hard, especially at a place as unique as Gordon.

It’s both a well-known liberal arts college among Christians and an evangelical bastion in increasingly secular New England, surrounded by some of the most competitive, prestigious universities on the planet.

“We’re, respectfully, a city on a hill in this part of the world,” Lindsay said. “When our chapel services meet, it’s one of the largest gatherings of evangelical Christians in the Northeast. We’re the largest evangelical employer in six states.”

Those Christian distinctives have also gotten Gordon in trouble. The college made headlines back in 2014 when Lindsay defended the school’s stance on sexuality and marriage against Obama-era anti-discrimination policies.

Gordon began as Boston Missionary Training School—founded by its namesake Adonriam Judson Gordon—in 1889, and with a more globally connected future in mind, Lindsay continues to evoke its early mantra: preparing the people of God for the work of God. “We want to have an education that’s not only more affordable than it is today, but also more adaptable to be able to serve more people,” he said.

Last year, giving to colleges and universities rose to its highest-ever levels, according to the Council for Advancement and Support of Education (CASE) Voluntary Support for Education (VSE) survey. More colleges reported record-breaking gifts like Gordon’s, with seven schools reporting donations of $100 million or more.

While plenty of strategy and campaigning goes into the fundraising, at Gordon, it all goes back to God. “Prayer is central,” said Britt Carlson Eaton, association vice president for advancement. “We know that all the provision is coming from God.”

Gordon received a $60 million gift from the estate of Dale E. and Sarah Ann Fowler in 2007, nearly tripling its endowment. The anonymous donor behind the new $75.5 million donation had been involved with Gordon for a decade before making the cash gift.

Even before a penny had been spent, the gesture had lifted spirits in the advancement office and among top administration officials. Eaton described a sense of “hope in God’s continuing provision.”

For Lindsay, “To get to see that up close renewed my sense of calling to the important work we do here and also renewed my joy for the gift and privilege to be able to serve Christian college students at a place like Gordon.”