With advocates as well as the SBC president speaking out, #MeToo is changing expectations for who gets a platform in Southern Baptist churches.
David Roach|January 28, 2020 10:19 AM 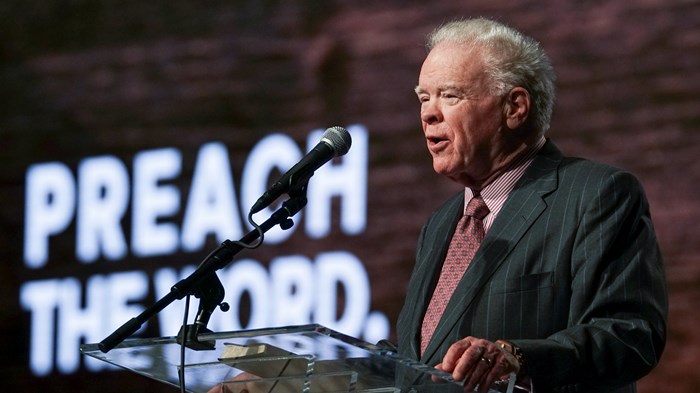 Amid a heated back-and-forth over Paige Patterson’s invitation to speak at a Florida church, the former Southern Baptist Convention leader’s supporters and opponents seem to agree on at least one thing: The #MeToo movement is changing the way some Baptists evaluate who is eligible for public ministry.

After Patterson was announced last month as a speaker at Fellowship Church’s Great Commission Weekend, fellow Southern Baptists and survivor advocates urged leaders to take him off the lineup in light of his 2018 termination from Southwestern Baptist Theological Seminary and allegations he mishandled students’ sexual abuse reports at multiple SBC seminaries. Last week, SBC president J. D. Greear waded into the discussion, urging churches to consider Patterson’s past before inviting him to speak.

Yet, Paige Patterson and his wife, Dorothy, remain top-billed for next weekend’s event. Timothy Pigg, pastor of Fellowship Church, told CT the church has received dozens of emails and phone calls about Patterson. The congregation’s social media traffic has increased approximately tenfold since announcing Patterson as a conference speaker, and its local newspaper, the Naples Daily News, reported on criticism of the church.

Two leaders with the Florida Baptist Convention were scheduled to speak at the conference but have withdrawn. Approximately 150–200 people are expected to attend. Sexual abuse victims’ advocate Susan Codone tweeted a request that people contact the church and ask it to withdraw Patterson’s invitation because “the #SBC and the many harmed by the Pattersons deserve better.”

Among Southern Baptists, adultery and divorce used to be the only sins thought to disqualify a person from public ministry, said Barry Hankins, a Baylor University historian who has written extensively on the SBC. But now, mishandling abuse may be joining the list.

“Things have changed so quickly across American culture with the #MeToo movement, whether you’re talking about Hollywood on one end or the Southern Baptist Convention on the other,” Hankins told Christianity Today. He said that Americans moved from thinking, “Let’s not make a big deal out of” sexual abuse, to thinking, “It’s a big deal, and anyone who doesn’t make a big deal out of it needs to be singled out.”

On Friday, president Greear cautioned churches to think twice before hosting Patterson, when asked by the Houston Chronicle about this weekend’s conference.

“Trustees terminated Paige Patterson for cause, publicly disclosing that his conduct was ‘antithetical to the core values of our faith.’ I advise any Southern Baptist church to consider this severe action before having Dr. Patterson preach or speak and to contact trustee officers if additional information is necessary,” said Greear, who himself studied under Patterson as his doctoral advisor and long saw him as a model and mentor in ministry.

Now, many Patterson supporters seem to agree with his concern, but some critics claim Greear’s statement violates the biblical principle of local church autonomy by attempting to govern a congregation from the outside—pushback that has followed every effort by the denomination to strengthen its response to abuse. The critics also say Patterson is not guilty of mishandling abuse.

Patterson told CT, “President Greear has every right to hold any opinion of my life and ministry that he wishes. While I read his persuasion with great sorrow, he has a right to publish his views as far as he wishes. If he is accurate, I deserve it. If false, I leave the matter in the hands of God confident that God will excel in mercy and justice at all times.”

Patterson was removed from his presidential role at Southwestern in 2018 and terminated a week later. Trustees cited information regarding Patterson’s “handling of an allegation of sexual abuse” at “another institution” (presumably Southeastern Baptist Theological Seminary, where he was president from 1992–2003). Patterson also is being sued for allegedly mishandling a student’s claim of being sexually assaulted at Southwestern. Patterson has denied any wrongdoing at either seminary.

Over the past year, he has continued to preach at multiple Southern Baptist churches, including Victory Baptist Church in Rowlett, Texas, where he was recently given a “Defender of the Faith Award.”

Scott Colter, Patterson’s former chief of staff at Southwestern and a fellow speaker at the Great Commission Weekend, called Greear’s comments about Patterson “a monumental overreach and misuse of his role as SBC president.”

While some assume that hosting leaders surrounded in controversy will become too great a risk for churches, certain pastors now may see it instead as an opportunity to flex their independence. Colter said he heard from several pastors who responded to Greear’s remarks by inviting Patterson to preach.

Pigg, pastor of Fellowship Church, views Patterson’s appearance as a local church autonomy issue rather than a #MeToo issue. In a January 17 letter to Fellowship Church members, Pigg wrote that the allegations Patterson mishandled abuse have been “dispelled” and none of the actual reasons for his termination at Southwestern “would disqualify him biblically from occupying our pulpit,” according to a copy of the letter provided to CT.

Greear told the Chronicle that local church autonomy does not negate the need to “take our mutual accountability to each other more seriously than we have in the past. If our system of governance means anything, it means exercising due diligence and heeding what those whom we put in positions of trustee oversight have reported about official misconduct.”

Preventing and responding to sexual abuse continues to be an emphasis during the second year of Greear’s two-year presidency. While abuse advocates inside and outside the SBC have applauded Greear’s remarks, few major SBC leaders have joined him to speak out.

“Very grateful someone took a stand,” tweeted Rachael Denhollander. “Autonomy does not mean silence and lack of accountability. The most important thing we can do is speak the truth and push each other towards righteousness. May we see more of this, and deeper action still.”

Patterson is the first SBC entity executive to be terminated in the #MeToo era amid allegations of mishandling abuse. That has made his situation something of a new frontier for Southern Baptists—and a possible precedent for other leaders who have been fired or have stepped down over mishandling abuse allegations. Patterson “got caught in doing things the old way,” Hankins said. “He’s an egregious offender” but “not singular by any means.”

Online chatter also has surrounded other Southern Baptists accused of abuse and mishandling abuse, especially after Greear last year publicly listed 10 churches “alleged to have displayed a wanton disregard for the seriousness of abuse.” As accused ministers accept speaking engagements or begin new ministry ventures, more controversy is likely to ensue. (Attention has returned to influential SBC preacher Jerry Vines, who is alleged to have concealed claims of abuse alongside Patterson, according to reporting by the Chronicle. The pastor whose abuse he is accused of covering up—Darrell Gilyard—recently returned to the pulpit again.)

The SBC Voices blog has speculated that inviting Patterson to preach could carry consequences for a church within the broader SBC.

A January 14 post by William Thornton theorized that Fellowship Church “has been reported” to the SBC’s newly constituted Credentials Committee, which considers reports of a church’s alleged departure from Southern Baptist polity, doctrine, or practice. The Credentials Committee is charged with reporting to the SBC Executive Committee, which meets next month in Nashville, Tennessee.