While Trump extremists set the vice president up as a traitor, most believers stood by his decision to confirm the election.
Kate Shellnutt|January 13, 2021 01:00 PM 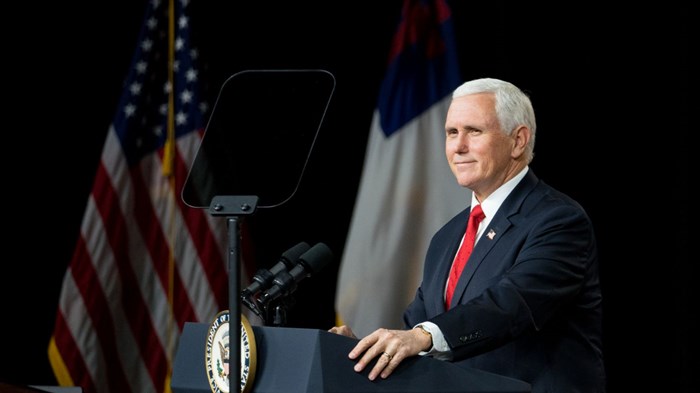 At a farewell gathering last Friday, outgoing Vice President Mike Pence recalled the Bible reference his chief of staff texted him after he certified Joe Biden’s victory, The Washington Post reported. It was 2 Timothy 4:7: “I have fought the good fight, I have finished the race, I have kept the faith.”

Pence was pushed into the political spotlight during the tense final weeks of the presidential term, as he refused President Donald Trump’s demands that he use his position to fight the election results and then refused Democrats’ demands that he invoke the 25th Amendment to remove Trump from office.

But Christian political scientists say recent events won’t do much to separate Pence’s legacy from Trump’s contentious shadow. MAGA loyalists will side with the president over him, and evangelicals who respected Pence’s character from the beginning see his conscience on display as he broke from the president’s campaign to discredit the election.

Pence was welcomed on to Trump’s presidential ticket back in 2016 largely for his faith. One of the most outspoken evangelicals ever elected vice president, he was framed as the kind of moral, dependable politician Republican Christians could trust—before Trump built up his own evangelical networks and ties.

Though the VP spent most of the past four years working in the background and standing by the president, that dynamic has shifted in recent weeks. Pence has taken a place in the political spotlight and opposed to Trump, who said his vice president “didn’t have the courage” to reject the congressional confirmation of the election, though Pence insisted he did not have constitutional authority to do so.

For evangelicals who backed Trump, “I think that actually many within this community were more stung by Trump’s open criticism of Pence than by what Pence chose to do in his refraining from exercising a questionable power,” said Scott Waller, politics professor at Biola University.

“Pence was a faithful supporter of the president and his policies. To throw him under the bus, as he did in the waning hours of his presidency, probably diminished Trump’s reputation among evangelicals much more than anything Mike Pence has done in the last two weeks.”

After legal challenges to vote counts failed in several states, the president and the “Stop the Steal” crowds repeatedly called on Pence to overturn the election and keep the hope of a last-ditch Trump victory alive. Ahead of the Capitol breach last Wednesday, rioters chanted “Hang Mike Pence” and erected a wooden gallows on the lawn. The morning after, with Biden’s win official, people calling Pence “Judas” trended on Twitter.

Some conservative Christians have risen to defend Pence from the extreme attacks.

David Brody, a Christian Broadcast Network commentator and Trump supporter, also spoke up on his behalf on Twitter, saying he deserved to be treated better for his longtime loyalty to the president.

Most evangelical leaders’ political statements have been focused more on the president, though.

It’s approval levels for the president that define Americans’ views of an administration, even more so with a leader as attention-grabbing as Trump. Though Pence offered some evangelical reassurance in the beginning, “support for President Trump grew among evangelicals regardless of Vice President Pence’s presence,” Smith noted.

Through his closest spiritual mentor, Paula White-Cain, Trump developed his own relationships with televangelists, pastors, and ministry leaders. In the 2020 campaign, white evangelical enthusiasm grew, as a majority told pollsters they were casting their ballots for Trump, and not just against his opponent.

Franklin Graham said the Capitol violence wouldn’t deter evangelicals from supporting Trump, whom he has urged to meet with the incoming president and vice president to ensure a peaceful transition of power. But the evangelical ministry leader saved higher praise for Pence, saying, “Our nation has been blessed to have this man serve as Vice President for four years. I thank God for him and for his character, integrity, and wisdom.”

Texas pastor Bob Roberts—who had criticized the administration’s policies around immigration, refugees, and Muslims—thanked the VP for his stand. “As a brother in Christ know that thousands if not millions of us are praying for your continued wisdom, endurance, courage & leadership,” he tweeted.

A majority of Americans (68%) as well as a majority of evangelicals (60%) agree with the vice president’s decision not to interfere with the certification process, according to a Politico/Morning Consult poll.

“I doubt Pence’s decision to abide by his constitutionally prescribed duties altered his standing among many evangelicals. They either liked him from the start, or they were ambivalent until he turned on Trump,” said Daniel Bennett, political science department chair at John Brown University.

Pence was raised Catholic and became born-again at a Christian music festival in college; he and his family attended an Evangelical Free church in Indiana, where he advocated for pro-life policies and religious freedom. Pence continued to reach out to evangelicals and champion their causes—speaking at events like the March for Life and the Southern Baptist Convention annual meeting.

“Other than George W. Bush, Pence is the most outspoken evangelical Republican to ever serve on a presidential ticket,” Bennett said. “But his legacy will always be tied to Trump, for better or for worse.”

Both leaders saw their favorability ratings drop following the election and the president’s ongoing fight to claim victory, including among evangelicals.

Throughout his political career, Pence has quoted 2 Chronicles 7:14, a verse that has become a mantra among Trump supporters: “If my people, who are called by my name, will humble themselves and pray and seek my face and turn from their wicked ways, then I will hear from heaven, and I will forgive their sin and will heal their land.” It was the most-searched verse around the 2016 election and jumped to the third most-searched verse on Bible Gateway last year.

But it was a version of the familiar lines from Ecclesiastes he quoted in a letter sent Tuesday to House Speaker Nancy Pelosi, stating that he would not evoke the 25th Amendment to remove the president from office.