(UPDATED) Prayer requests from Donetsk: “First, to stop the aggressor. But then for peace of mind, to respond with Christian character and not from human hate.”
Jayson Casper|February 24, 2022 01:55 PM
español简体中文한국어繁體中文русский 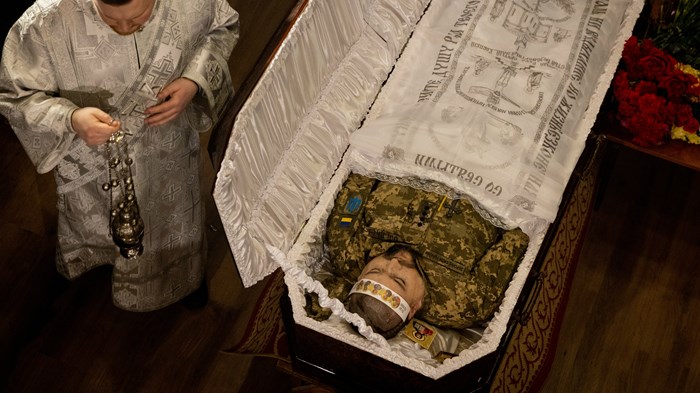 Image: Chris McGrath / Getty Images
The body of Captain Anton Olegovich Sidorov, recently killed in Donetsk, is seen during his funeral on February 22, 2022 in Kyiv, Ukraine.

As Russia invaded Ukraine today, pressing near even to the capital of Kyiv, a Baptist home was destroyed and a seminary shaken by nearby blasts. Local sources told CT, however, that no churches or Christian buildings had been attacked so far.

President Vladimir Putin announced his forces were targeting only military installations. He also asserted that Ukraine does not truly exist as a nation.

Igor Bandura, vice president of the Baptist Union, the largest Protestant body in Ukraine, heard about collateral damage to the home of a Baptist in Donetsk during a Zoom call with his 25 regional superintendents.

Minus one. On the front lines of the eastern Donbas region, the Baptist leader from the occupied territory of Luhansk was unable to join.

But from the town of Chasov Yor on the front lines in neighboring Donetsk—in an area then still under Ukrainian government control—Bandura learned the local assessment.

“People don’t want to be under Russian control,” he was told. “But they feel helpless. What can ordinary people do?”

This was the message put out by the Ukrainian Council of Churches and Religious Organizations (UCCRO), a day after its appeal to Putin went unanswered.

“We urge you to remain calm, not to give in to panic, and to comply with the orders of the Ukrainian state and military authorities,” stated the UCCRO. “The truth and the international community are on the Ukrainian side. We believe that good will prevail, with God’s help.”

President Volodymyr Zelensky announced by video shortly after midnight that 137 Ukrainians died during the invasion’s first day. “They are killing people and transforming peaceful cities into military targets,” he said, according to The New York Times. “That’s villainous and will never be forgiven.”

Valentin Siniy, president of Tavriski Christian Institute (TCI) in Kherson, about 50 miles from Crimea, had to evacuate his seminary along with a team of Bible translators as Russian helicopters attacked local targets.

“The majority of old pastors of the churches stayed in the cities. Youth leaders started evacuating young people,” he told CT. “We managed to purchase a van with 20 seats in order to evacuate people. About 30 people are in a safe place now, in western Ukraine. There are about 40 more people driving west [in] vehicles that are in bad condition.”

Meanwhile his church has opened its basement to shelter neighbors living in multi-story buildings from bombings.

“I and all ministers stay in Kyiv,” said Yuriy Kulakevych, foreign affairs director of the Ukrainian Pentecostal Church. “We continue our intercessory prayers, talk to people to reduce panic, and help those in need.”

In Kamyanka, 145 miles south, Vadym Kulynchenko of Our Legacy Ukraine reported that his church had already started to receive refugees from the east. Temporary shelter will be provided, and the main needs are food, medicine, fuel, hygiene products, and air mattresses.

“Please pray for disciple-making in the country, safety for our people, and generosity in the midst of war,” Kulynchenko asked. “And also for discernment, as there is a lot of fake news.”

“Generating panic through the spread of manipulative false information is exactly what the enemy seeks,” a communications professor wrote on Tuesday. “This war is not as much for our territories, as it is for our soul and our mind.”

On Thurs, KTS cited Isaiah 41:10 as it urged its Facebook audience “not to panic, but to remember how many times God in His Word says ‘don’t be afraid.’” The seminary noted that fear equals paralysis, while prayer, trust in God, and love of neighbor all give strength.

With a “leaden heart,” Taras Dyatlik wrote to supporters of theological education of the many prayer needs currently facing his fellow church and seminary leaders in Ukraine—including receiving refugees into their dorms.

“Many of them are thinking about evacuation of their workers and faculty and students within Ukraine, and some do not have any possibility to evacuate,” wrote the Overseas Council regional director for Eastern Europe and Central Asia.

He asked for prayer for families, including his own, as Ukraine’s announcement of total mobilization “means many students, graduates, faculty will be called for military duty to serve in the army and participate in the combats.” And he requested prayer for the spouses of male leaders. Since all men ages 18 to 60 are no longer allowed to leave the country, he said many wives are staying as well.

“Today I talked to [my wife] about evacuation out of Ukraine,” wrote Dyatlik. “She immediately refused and said: ‘I will be with you to the very end.’”

Students at Ukraine Evangelical Theological Seminary (UETS) outside Kyiv were instructed to shelter in place as military battled at a nearby airport, according to the school’s director of English language services, Josh Tokar. Those on campus are scared but not panicked, he said. The seminary president sent out a message from Psalm 27: “The Lord is my light and my salvation— whom shall I fear?”

Bandura did not resonate with the call for calm.

“Who are you to say our nation doesn’t exist?” he said of Putin’s rhetoric. “The truth is with us, and God is with us. We want to live in peace, but if Russia wants to take this from us, let’s fight.”

While some Ukrainians favor Russia, he said, half the population is ready to personally defend their nation.

Pictures have circulated of grandmothers with guns. A recent CNN poll, meanwhile, found 13 percent of Ukrainians in favor of Russia’s use of force to reunite the two nations. Only 36 percent of Russians were in favor. (73 percent and 43 percent disagreed, respectively.)

The Russian Evangelical Alliance (REA) conveyed its support for the UCCRO appeal for peacemaking initiatives.

“All evangelical Christians pray every day and ask the Almighty to give wisdom to all,” stated Vladimir Vlasenko, REA general secretary, “to preserve the fragile peace and not to plunge our countries into fratricidal conflict.”

“We see no justification for these actions and are deeply distressed by the death, destruction, chaos, and misery that will result,” stated Thomas Bucher, secretary general of the European Evangelical Alliance, according to Evangelical Focus.

“The invasion of Ukraine is both unjustified and unprovoked,” he stated. “It has been claimed that the attack is necessary to protect ethnic Russians within Ukraine and to stop Ukraine from threatening Russia. These claims are untrue. This disaster has been provoked into being by President Putin for wider geopolitical purposes.”

In Rivne in western Ukraine, local officials directed all churches to remain open, with church leaders staying in touch with residents to help coordinate aid as well as military equipment as needed.

Many in Ukraine are showing resilience.

“Our prayer today is that God’s will spreads on Earth as it is in Heaven,” said Siniy. “I encourage my staff and other Christian leaders that the mission stays the same even if we have to change geography.”

Staff at New Life Radio in Odessa, on the Black Sea coast, watched missiles fly past their homes. They told Evangelical Focus they are taking actions to hide equipment and preserve broadcasting, in case the station is raided in the near future.

Vasyl Ostryi, a pastor at Irpin Bible Church 18 miles northwest of Kyiv and a KTS professor of youth ministry, has also decided to stay.

“When this is over, the citizens of Kyiv will remember how Christians have responded in their time of need,” he wrote for The Gospel Coalition. “We will shelter the weak, serve the suffering, and mend the broken. And as we do, we offer the unshakable hope of Christ and his gospel.” 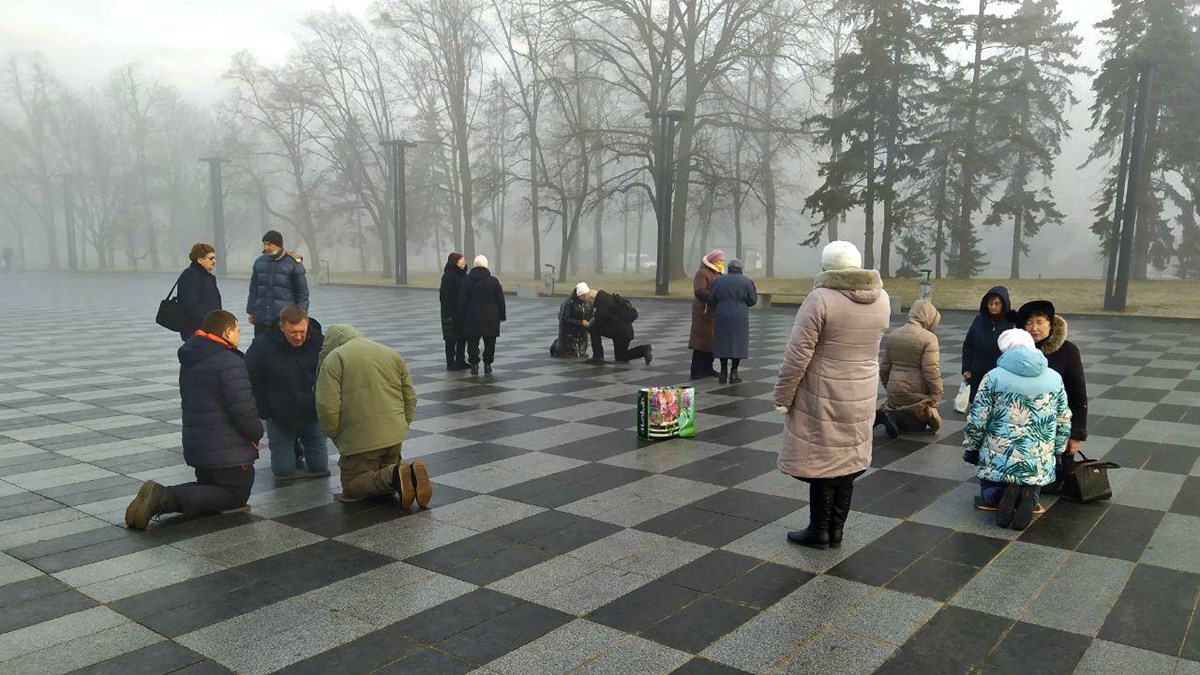 Ukrainians praying in the central square of Kharkiv, Ukraine.

YouVersion noted a spike among Ukrainian and Russian users of its popular Bible App over the past three weeks: searches for fear increased 11 percent; searches for peace increased 44 percent.

“We printed Bibles for 2022 and we are now in second month of the year and the stock in our warehouse is almost gone,” Anatoliy Raychynets, deputy general secretary of the Ukrainian Bible Society, told Eternity News shortly before the invasion.

“In our churches—whether it is Orthodox, Catholic, Protestant, or Evangelical churches—there are more new people. Not only on Sundays or Saturdays, but also during the week,” he told the Australian Bible Society news service. “On evenings when we have a Bible study, new people are coming. They want to pray, to hear something that brings hope or comfort.”

Rick Perhai, director of advanced degrees at KTS, said the international church he pastors in Kyiv has several leaders recommending the congregation continue its worship this coming Sunday. Some of their expat members have fled; others want to stay and join the fight.

He laments that the enemy is seeking to destroy Ukraine as its Christians grow more and more poised to carry the gospel to surrounding nations. Nonetheless, he is praying for the Russians, asking for God to grant them repentance.

But his petition is also imprecatory.

“Pray that the nation of Russia would tire of their tyrant’s rantings at home and abroad,” Perhai said, “and that they would remove him.”

Dyatlik also requested prayer for “the truth,” citing all the “perspectives” in the media.

“We did not invite the war. The Kremlin and Vladimir Putin brought it to Ukraine. … There is moral evaluation of the acts of aggression like this,” wrote the theological educator. “These acts have biblical definition and biblical evaluation. Please pray for the spiritual discernment about these things.”

Dyatlik closed his prayer letter with requests for believers on both sides of the conflict:

Please pray about Russian Christians that they would raise their prayers and voice toward Russian government to stop the aggression; [that they] would not keep silent; please pray for the Western governments, of the US and European Union.

Finally, please pray about Ukrainian Christians, that we will serve and live as the community of hope in a full sense of this term; that during these terrible times we would invite more and more people to the relationships with God and His children, to the relationships of love, hope, encouragement, support; that our minds and characters would continue to transform into the character of Jesus Christ.

Western nations have roundly condemned Putin, and readied sanctions. Reports circulated of Russians lining up at ATMs to withdraw their cash, fearful the nation would be cut off from the international banking system.

Meanwhile in Donetsk, where 25 missionary teams have been working to establish churches, gas lines require a wait of hours for a rationed supply of five gallons. Grocery stories suffer empty shelves, as Ukrainians stock up on emergency food and water.

“First, to stop the aggressor,” he said. “But then for peace of mind, to respond with Christian character and not from human hate.”

[ This article is also available in español,  简体中文,  한국어,  繁體中文, and русский. ]

1 of 2
Friends and family attend the funeral of Captain Anton Olegovich Sidorov, killed in Donetsk, on February 22, 2022 in Kyiv, Ukraine.Ukrainians praying in the central square of Kharkiv, Ukraine.
expand