The Supreme Court Leak Was an Unplanned Complication for Pregnancy Centers 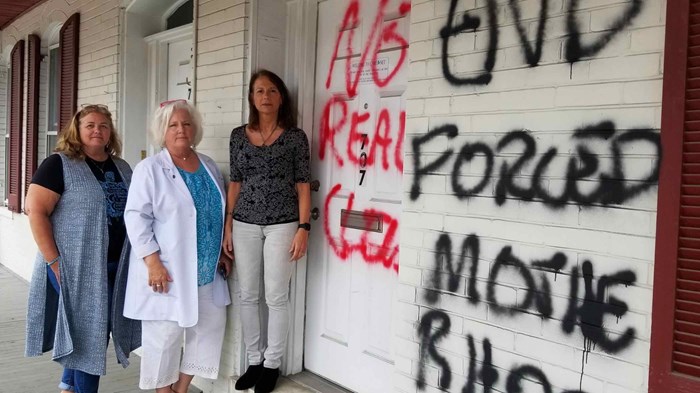 Penni Hill never expected First Step Pregnancy Resource Center in Bangor, Maine, to become a target of pro-life protestors. The pregnancy center is, after all, a pro-life alternative to an abortion clinic, helping women choose to carry their pregnancies to term.

But days after the leak of a draft of a Supreme Court ruling overturning Roe v. Wade, some phone calls came in, with people shouting that abortion is murder. As the temperature of the national debate spiked, some angry people were getting confused about who was on whose side. Then the director of the pregnancy center found the center’s sign and sign holder on the front door ripped off.

“We’ve never had anything here like that,” said Hill, whose center has a good enough relationship with the local health department that it refers clients to the center for parenting classes. “The town has been in an uproar.”

In Maine, even if the Roe reversal comes to pass, abortions would still be legal until viability, or 24 weeks. Hill spoke to the local media in Bangor, serving as a counterpoint for stories about protesters defending the right to abortion.

Meanwhile, she and other pregnancy center leaders in both red and blue states said that the women they are serving haven’t brought up the news at all.

“I don’t know if our clients know what’s going on,” Hill said. “If they’re dealing with an unplanned pregnancy, they might not be paying attention to the news.”

For women thinking about having an unplanned baby, there are more pressing concerns, like the national shortage of infant formula. Melanie Miller, executive director of Ashland Pregnancy Care Center in Ashland, Ohio, said on May 5 that their center did an outreach with a formula giveaway and one mom came in sobbing because she hadn’t been able to find formula anywhere.

Pregnancy resource centers—faith-based pro-life organizations that offer services ranging from basic counseling to full medical care for women with unplanned pregnancies or other needs like STI testing–find themselves in the middle of a chaotic situation. The news that the Supreme Court might overturn the 1973 decision that legalized abortion across the country left them tense, not triumphant.

They were anticipating a possible ruling in June. They weren’t prepared for the political upheaval without an actual decision.

Some pregnancy centers have experienced vandalism since the leak. Two days after the leak, someone busted the windows of the Southeast Portland Pregnancy Resource Center in Oregon and spray-painted an obscenity about pregnancy centers. The center, which has medical staff who do ultrasounds and testing for sexually transmitted infections (STIs), is part of an umbrella organization, First Image, that also does grief care for miscarriages, stillbirths, or women who are post-abortive or grieving an adoption.

“I believe that when the world heats up, it should be a call for us to lean into redemptive work,” said executive director Luke Cirillo in a blog post about the vandalism.

In Wisconsin, police reported that someone had set on fire the office of a political group opposing abortion, writing in graffiti, “If abortions aren’t safe then you aren’t either.”

Staff arrived at work on May 4 at another pregnancy center, Care Net in Frederick, Maryland, to see graffiti covering the building. The red and black graffiti read, “Fake clinic … end forced motherhood … abortion is a human right.”

If Roe is overturned, Maryland will continue to allow abortion up to viability, and for a woman’s life or health after viability. A donor to the center who owns a construction company had the graffiti painted over by late afternoon. Inside, the center was hosting a healing class for post-abortive women.

“It’s disturbing and unnerving,” said executive director Linda King. “We are a real clinic, we have all the licensures required by the state, our doctor is a licensed ob-gyn in the state of Maryland.”

It’s not always clear what precisely motivated an attack though. The night before the vandalism, a heated local board of education meeting discussed STI testing awareness for middle schoolers, King said, and a school video pointing teenagers to Planned Parenthood for testing. One former board member of the pregnancy center stood up at the meeting to say that Care Net also offered free STI testing. King wasn’t sure whether the graffiti was related to that local discussion or the Supreme Court leak, or both.

Care Net is installing more security cameras around the building.

A new generation of pregnancy centers has tried to be less political and focus on serving a variety of needs pregnant women have, during the pregnancy and after. Most centers advertise what specific services they offer and make clear that they do not perform abortions.

“I believe we should be out front and honest from the get-go. Nobody likes a used-car salesman,” said Savannah Marten, executive director of The Pregnancy Center of Greater Toledo in Ohio.

New York City, meanwhile, has on its department of health website a section titled “Avoid Fake Clinics,” referring to pregnancy centers, and links to a “fake clinic map,” which includes the most inoffensive of faith-based counseling and support centers.

Anne O’Connor, the vice president of legal affairs for NIFLA, an umbrella organization for pregnancy centers, said they are calling on centers to increase their security.

A number of pregnancy centers CT contacted said they were under a media blackout, either from their parent organizations or self-imposed. They didn’t want to be commenting on an uncertain situation, or make themselves targets in the debate.

The Pregnancy Center of Greater Toledo in Ohio had a statement prepared for a possible Supreme Court overturn of Roe. But they decided not to release anything because of the uncertainty around the leak. Marten, the executive director, said the news and social media chatter, especially about the pro-life side not caring about women, has been “exhausting.”

“I try to shield my team from it here,” she said, telling them not to get online and try to defend themselves. “I saw a post on Instagram: ‘I’ve never met a pro-life person who is addressing access to health care, accessible childcare, college education.’ Hundreds of people are commenting, ‘Yeah I’ve never met one of those.’ I’m thinking I’m going to lose my mind. We’re here!”

Centers find it difficult to connect some of the national discussion with what they see in their local communities. Marten said her center has a “pretty good” relationship with the abortion facility in town, where the abortion facility understands the work the pregnancy center does, but she said that took five years of work. Still, given the national debate, her center did a safety briefing for staff after the leak.

Clientele up, but not because of the case

“Overnight it changed the way pregnancy centers did their ministries,” said Miller, the Ashland executive director. “A woman doesn’t have the time. She needs to make a decision right away.”

Individual situations, of course, don’t always map onto national debates. Miller said five weeks after spring break is always a busy time for her center, but she hasn’t heard any client bring up the issue of Roe being overturned. The Pregnancy Center of Greater Toledo has seen a significant increase in abortion-minded women this year, but Marten hasn’t heard too many people talking about the Supreme Court.

“What brings them through our doors doesn’t have a rhyme or reason,” she said.

Lisa Hogan, the executive director of Sav-A-Life pregnancy center in Birmingham, Alabama, said pregnancy centers serve people by being constant and not changing their approach with the ups and downs of the fight over abortion, politics, and the news.

The Supreme Court Leak Was an Unplanned Complication for Pregnancy Centers

The Supreme Court Leak Was an Unplanned ...