How journalist Cynthia Gorney has helped both sides of the abortion debate to view the other side honestly.
Interview by Wendy Murray ZobaApril 27, 1998
This article is from the April 27 1998 issue. Subscribers can read all of CT's digital archives.

In 1989, after the Supreme Court agreed to hear the pivotal abortion case William L. Webster v. Reproductive Health Services, reporter Cynthia Gorney was dispatched by The Washington Post to "do a curtain raiser" on the law that was at issue. That law had been fiercely debated in the Missouri general assembly, passed in 1986, and was to become the centerpiece for the Webster case. It seemed, at the time, that the Supreme Court entertained the possibility of overturning Roe v. Wade, but wanted each side to make its case about the validity of the Missouri law before making a ruling.

Gorney had not written in depth about abortion before. Nor had she encountered the energy that "strong religious faith" brings to this issue. Her unrelenting desire to understand the nuts and bolts of the controversy and the passion behind it compelled her to "press the flesh." (She integrates over 500 interviews into her narrative.)

When she began the formidable task of gathering background material from archives, she looked for an objective account of the evolution of the thinking on both sides. She needed a book, she says, "whose mission was not to convince but rather to explain." That's when she discovered that such a book "did not exist."

Now it does. Gorney's Articles of Faith, recently published by Simon & Schuster, offers an unprecedented fair-minded account of the passion and conviction that inspired people on both sides to become activists, leaders, and volunteers in this wrenching debate. She organizes the book around the two real-life figures of Judy Widdecombe and Sam Lee, vigorous activists in opposing camps. Putting human faces on this ideological battle ... 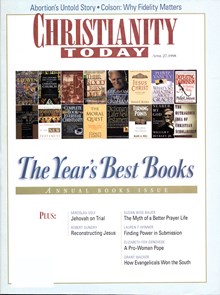 This article is from the April 27, 1998 print issue. Subscribe to continue reading.