What Would J. Christy Wilson Do?

Michael Maudlin, Managing EditorApril 5, 1999
This article is from the April 5 1999 issue. Subscribers can read all of CT's digital archives.

I never met J. Christy Wilson, but I have been struck at how many people have mentioned this nonprolific teacher as someone who had a tremendous influence on their lives. Wilson spent 23 prime years as a tentmaking missionary in Afghanistan and only began teaching missions at Gordon-Conwell Theological Seminary at age 53 in 1975.

One of these "Wilson disciples" is associate editor Wendy Murray Zoba, who claims, "Christy Wilson was my standard for what it meant to be a Christian." On the occasion of his recent passing (see "Briefs" in the North American Report, p. 15), Wendy explains why this indefatigable promoter of missions (especially tentmaking) inspired so many, and in doing so explains what we are trying to lift up in Christianity Today:

"Anyone who took a class from Christy Wilson will remember two assignments. One was praying through prayer cards for all the nations of the world (available at the G.C.T.S. bookstore) and the other was writing a biblical defense for the exclusivity of salvation in Christ and what that implies for Christian mission. Prayer and mission were his passions.

"It was difficult to take notes when he lectured because his storytelling militated against it. He relieved our anxieties, though, by refusing to give any grade lower than an A-. So we sat back and heard his endless accounts of what God did in the course of Christy Wilson's remarkable lifetime.

"He knew your name before you walked into class the first time. In fact, he knew your spouse's name and the names of your children. That is because he used to pray through Gordon-Conwell's student directory daily. This had the result of many students turning to him for guidance. As I walked through the hallways in the Kerr building, I would often ...

What Would J. Christy Wilson Do?

What Would J. Christy Wilson Do?
expand
hide this 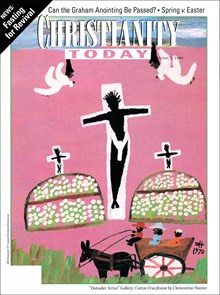 This article is from the April 5, 1999 print issue. Subscribe to continue reading.