A unanimous Supreme Court decision opens the door to real change.
Ted OlsenMarch 1, 2006
This article is from the March 2006 issue. Subscribers can read all of CT's digital archives.

The Supreme Court is consensus happy. In January, it didn't just issue one unified decision on abortion-related cases—it issued two.

In the second opinion, the Court dealt with a lower court's decision that barred Wisconsin Right to Life from broadcasting ads that mentioned the name of a senator during his reelection campaign. The justices sent the case back to the lower court to determine whether the pro-life organization is exempt from the McCain-Feingold campaign law—which the Court supported in a 2003 decision.

But that was an easy one for the Court: Even NARAL Pro-Choice America filed a brief on behalf of Wisconsin Right to Life. Still, the decision is important.

"This could be an important first step toward undermining [the 2003 ruling] without overruling it," Richard Hasen, an election-law expert at Loyola Law School, told Legal Times.

"Undermining without overruling" has become the key tactic regarding Roe v. Wade. Sen. Arlen Specter and others consider it a "super-duper precedent," but that doesn't mean it has to retain its full force. As Time recently noted, states have passed 52 new laws restricting abortion in 2005—more than twice as many as were passed in 2004.

The other January Supreme Court abortion ruling may be a resounding call to pass many more such laws in 2006 and beyond.

Lower courts had thrown out New Hampshire's 2003 parental-notification law entirely. But in Ayotte v. Planned Parenthood of Northern New England, the Supreme Court ruled that the courts were wrong to choose "the most blunt remedy."

Ted Olsen is Christianity Today's managing editor for news and online journalism. He wrote the magazine's Weblog—a collection of news and opinion articles from mainstream news sources around the world—from 1999 to 2006. In 2004, the magazine launched Weblog in Print, which looks for unexpected connections and trends in articles appearing in the mainstream press. The column was later renamed "Tidings" and ran until 2007.
Previous Tidings Columns:

The Art of Abortion Politics
expand
hide this 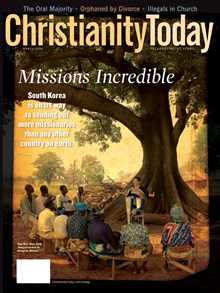