Twelve newcomers whose debut albums left a lasting impression on us, and who we'll look forward to hearing for years to come.
Compiled by Russ Breimeier and Andy Argyrakis|January 19, 2009

We always see the same complaint: "There just aren't any good new artists anymore." Sorry, but we beg to differ. As usual, plenty of artists made their national debut as a band or solo artist in 2008, but we found twelve that we particularly hope to hear more from in years to come—six bands, five young women, and one veteran who showed us he can take his music into new directions apart from his band. If you're looking for fresh talent in Christian scene with an engaging sound or insightful songwriting, consider these new favorites.

A short EP might not seem like enough to call Abandon one of the year's best new bands. But then it was certainly enough to recognize something special in Mute Math back in 2004. And it was also enough for music exec Chris York, who first heard Abandon playing a set at the venue next door as he was enjoying dinner with his wife. The band certainly has magnetic appeal, offering an alternative, yet accessible mix of power pop, Brit rock, and nü-new-wave. Sure enough, their MySpace page lists Sanctus Daylight Is Coming, Delirious, The Killers, U2, and yes, even Mute Math as influences—that last one all-too-obvious in their nonetheless impressive finale "Atmosphere," with its jazz-inflected ambience, dynamic surge, and aggressive drumming. Yet the San Antonio band avoids sounding derivative, largely because of their verve and skill as musicians. They also avoid making worshipful anthems like "Be Alive in Me" or "All Because of You" seem patterned or obvious, while crafting an interesting response to Peter's denial of Jesus in "Providence." This digital release may only offer five songs, but with such contagious choruses, varied arrangements, and openly spiritual songwriting that generally ...

Tags:
None
Posted:
January 19, 2009
More From: Compiled by Russ Breimeier and Andy Argyrakis 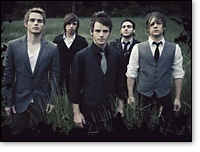