Online education is jolting seminaries with rapid enrollment growth.
John W. KennedyApril 23, 2010
This article is from the April 2010 issue. Subscribers can read all of CT's digital archives.

Shawn Cossin completed his bachelor's degree in Christian education at Wheaton College in 1993. After that, he became a military police officer in the U.S. Army. Eventually returning to his native Pennsylvania, Cossin became a state trooper—and a youth pastor at Sandy Lake Wesleyan Church.

In time, the church promoted Cossin to assistant pastor, and he felt pulled to enter full-time ministry, though he had never attended seminary. He imagined it would be impractical to quit both jobs, uproot his wife and two young sons, and immerse himself in studies on a residential campus for up to three years to earn a coveted ministerial degree.

But Indiana Wesleyan University provided another option: stay home, keep working, and earn a master of arts in ministry online. Cossin enrolled in the Marion, Indiana-based school in 2004.

"I was a bit skeptical of the viability of the program when I started," says Cossin, 38. "I had no qualms about the school itself. But at Wheaton I had such spiritual growth because of significant interaction with professors."

Cossin quickly adjusted his learning paradigm. Indiana Wesleyan's cohort model, where 20 or so students go through the program together, required Cossin to share ministry experiences with others.

"The online program moved me beyond my comfort zone and almost forced me to engage not only professors in conversation but also classmates with my own thoughts." Cossin graduated in 2007 and became the lead pastor of Sandy Lake Wesleyan.

Cossin admits that obtaining a degree online requires great self-discipline for those working full-time. But as a church staff member already, he found that he could immediately apply the information he learned. It also helped that Cossin's wife, Beth, obtained ...

The iSeminary Cometh
expand
hide this 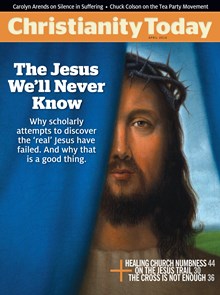 This article is from the April 2010 print issue. Subscribe to continue reading.