Australia's atheist prime minister wants chaplains in schools.
Trevor PersaudDecember 14, 2010
This article is from the December 2010 issue. Subscribers can read all of CT's digital archives.

Despite political opposition and court challenges, Australia's government will continue to use state funds to put staff chaplains in both public and private schools, as it has since 2007.

In August, the government of new Prime Minister Julia Gillard promised to extend the program through 2014. State-funded chaplains now serve 2,700 schools; Gillard wants to add another 1,000.

Gillard, whose atheism sparked international discussion during the campaign, nevertheless pledged faith in the chaplaincy system in an interview with the Australian Christian Lobby (ACL) shortly after taking office.

"We think it has been a great success, and what we wanted to see is to make sure schools around the country were fairly benefiting from it," Gillard told ACL director Jim Wallace.

"Many school principals are saying they want pastoral care in their schools," said Tim Mander, ceo of Scripture Union Queensland, one of the major suppliers of chaplains to schools in Queensland, which has more school chaplains than any other state. "In most cases, chaplains are the first point of contact for students with social, spiritual, emotional and sometimes physical needs. Principals and teachers agree that students are more comfortable approaching their chaplain, who is a non-authority figure in the school, than other adults in the school community."

The program is voluntary. Chaplains offer "comfort and support to students and staff" as well as "general religious and personal advice," said a spokesman for Peter Garrett, Australia's cabinet minister for education and youth.

"The aim of the chaplaincy program is to provide a complementary support role working alongside psychologists [and] counselors," Garrett's spokesman said. "It is not intended to diminish ... 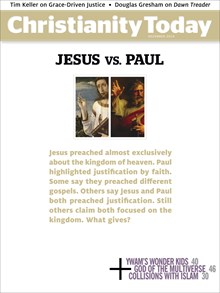 This article is from the December 2010 print issue. Subscribe to continue reading.