As head of the ministry Reasonable Faith and a prolific writer on topics of philosophy and theology, William Lane Craig has spent decades staking out sophisticated positions on the toughest questions of Christian faith. But for a long time, his beliefs on one controversial topic—the place of Adam and Eve in biblical and biological history—have remained unsettled. Craig considers this matter at length in his latest book, In Quest of the Historical Adam: A Biblical and Scientific Exploration. Science and religion scholar Melissa Cain Travis spoke with Craig about his views on Genesis, human origins, and the historical Adam.

You describe Genesis 1–11 as “mytho-history,” arguing that an ancient-Near-Eastern audience would not have understood this text as a literal historical narrative. How do you define mytho-history, and how does it function in divine revelation?

I’m not using the word myth in the popular sense of a falsehood, but rather in the folklorist’s sense of a traditional, sacred narrative explaining how the world and humanity came to be in their present form. History is a narrative concerning real people and events, and so a mytho-history would be a sort of fusion of the two: a narrative concerning real people and events told in the language of myth in order to ground a culture’s identity and institutions in events of the primordial past.

One reason you support the mytho-history classification is the presence of what you call “fantastic elements” in the text. What are these, and how do they differ from supernatural elements?

I define “fantastic elements” as those which, if taken literally, are so extraordinary as to be palpably false. Myths are typically characterized by these sorts of fantastic elements. For example, in the Mesopotamian myth The Epic of Gilgamesh, there’s a story of how the bull of heaven—that is, the constellation Taurus—comes down to Earth and rampages through the town of Uruk until Gilgamesh and his cohort grab the bull by its tail, slay it, and distribute its meat to the town’s citizens.

Similarly, the primordial history of Genesis 1–11 includes elements which, if taken literally, would be so extraordinary as to be clearly false. Take, for example, magical trees with fruit that, if eaten, would impart the knowledge of good and evil or immortality, or the presence of a talking snake that tempts the man and woman to sin. Now, these are different from supernatural or miraculous elements, which concern events God brings about directly. Given the existence of a transcendent creator and designer who established the universe and its laws, it’s perfectly plausible that such a person could work in ways unexplainable by natural causes.

Should we be troubled by the idea of a single book of Scripture containing two significantly different literary genres?

People might be uncomfortable with the idea that the first 11 chapters of Genesis are mytho-history while the remaining chapters are ordinary history. But I don’t think we should be troubled by this, because having mixed genres in a single book of Scripture is actually rather commonplace. For example, the Book of Revelation contains both apocalyptic literature about the end times but also epistolary literature—letters to the various churches of Asia Minor. Or, think of the Gospels, which include both historical narratives and parables told by Jesus. In fact, Genesis 1–11 contains poetry as well as mytho-history—think of Lamech’s boasting (4:23–24) or Adam’s response to meeting Eve (2:23).

Many Christians fear that a nonliteral understanding of the early chapters of Genesis is incompatible with the doctrine of inerrancy. You disagree. Why?

The doctrine of inerrancy states that Scripture is truthful in all that it teaches, and that teaching can be expressed via literary forms —poetic, apocalyptic, mythological, and so on. Certainly there are statements in Scripture that do not represent the teaching of Scripture. A clear example is Jesus’ saying that the mustard seed is the smallest of all seeds (Matt. 13:32). Scientifically, that would be false, but nobody thinks Jesus is teaching botany. He’s teaching a lesson about the kingdom of God. So, it would be wrong to regard that as an error in Scripture. 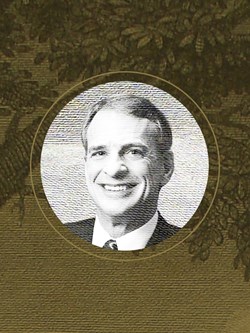 In examining the relevant scientific data, you accept the theory of common descent—the belief that life on earth, including human life, evolved from a common ancestor. As for the “founding pair,” you propose that God might have “lifted them to the human level” through a “radical transition” that “plausibly involved both biological and spiritual renovation.” Why is this scenario a better explanation than a de novo (“from scratch”) creation of Adam?

Several questions here need to be teased apart. First, it’s very important to understand that this book is not concerned with how man came about, but when. I assume, for the sake of argument, common descent. But that isn’t to say that I defend or propound it. Given the assumption of common descent, I ask if we can identify when human beings first appeared in the process.

Moreover, I think that the question about the first appearance of man is not equivalent to when the genus Homo appears on the scene. Early hominins were lumped into that category rather artificially, so we shouldn’t assume some form is human simply because it’s classified as Homo. We need other criteria for humanity. In terms of the biological and spiritual renovation that lifted these prehuman hominin forms to a fully human status, I assume the evolutionary scenario simply to show that there isn’t any incompatibility between it and the existence of a primordial human pair from whom all humanity is descended. We can identify when in human history this original human pair probably appeared. I argue that Adam is plausibly to be identified as Homo heidelbergensis (Heidelberg man).

Would you say that evolutionary history, up until Adam, was divinely guided or naturalistic?

It’s important to understand that these are not mutually exclusive alternatives. I believe God can have providential control over both human history and evolutionary history without the necessity of miraculous interventions. But I do defend the view that in order to have a human being you need to have the infusion of a rational soul into some preexisting hominin form. What I suggest is that God may have brought about both a biological and spiritual renovation of a hominin form that would make it truly human, biologically capable of sustaining a rational soul.

So, it is possible to have a divinely guided, providentially directed evolutionary process that is purely naturalistic but under God’s sovereignty.

Did you encounter any surprises during your research?

One big surprise involved changing my mind on an important question. Previously, I had thought that physical mortality was the result of the Fall. But I’m now convinced, based on my reading of Genesis 3, Romans 5, and 1 Corinthians 15, that Adam and Eve were created mortal. That’s why the Tree of Life was necessary in the Garden. They would have naturally died even if they had not fallen.

How do you hope your book will benefit the church?

I recently received a question of the week through our Reasonable Faith website: “Don’t you think that it’s time we denounce the literalistic interpretation of the first 11 chapters of Genesis, because what it’s leaving in its wake is apostasy and faithlessness, and causing people to turn away from Christianity?” It’s my hope that, by showing there is no incompatibility between contemporary evolutionary science and the affirmation of a single human pair at the headwaters of the human race, we can prevent that obstacle to faith.