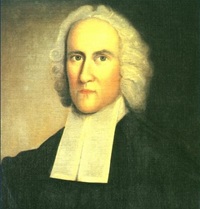 Noted historian George Marsden's 2003 Jonathan Edwards: A Life won numerous awards, including the prestigious Bancroft Prize from Columbia University. Last year he published a shorter biography of Edwards aimed at a wider audience. We discussed the book and Edwards's legacy.

You describe revivalism as America's "most influential religious tradition." How do you reach that conclusion?

The United States is often noted for its continuing religious vitality in contrast with Western Europe and Great Britain. One reason for that has been that American Christianity has from early times been more voluntary than coerced by the state. Revivalism was one of the first adaptations to that voluntary environment and has been a major reason for church growth in every era ever since.

How did Edwards help craft that legacy?

In 1734 and 1735, as a young pastor, Edwards oversaw an amazing awakening in his town of Northampton, Massachusetts. That was not the first such awakening, but Edwards was the first to publicize it widely. He wrote a careful account of this "Surprising Work of God" and it was published in England. It was, for instance, an influence on John Wesley.

How did Edwards identify a revival?

He looked for signs that the work was, as his title suggests, a "Work of God." Were people's lives truly being changed? Was their religious experience truly centered on God and what God in Christ had done for them, or were they in love with their own experience or with what they hoped to get out of it?

What was Edwards's unique contribution to the theology of revivals?

He defended the awakenings of his day by pointing out that extravagant emotions, outbursts, being overcome physically, or other ecstatic expressions were neither necessarily evidences of genuine awakening nor necessarily evidences of false awakenings. Edwards's most important contribution to this discussion is his classic "Treatise on Religious Affections." In it he argues that true Christian experience will involve deep commitment of our affections and then goes on to analyze the signs of true religious affections, focused on God, and false ones, focused on ourselves.

To what do you attribute the renewed academic and popular interest in Edwards today?

The academic interest is related to the fact that Edwards is the most impressive thinker in early American history, and so even some secular thinkers, including some high-powered philosophers, have been interested in him. Also Protestant philosophers and theologians, especially neo-orthodox and conservative Reformed, have been fascinated by his works. The popular interest is related to the resurgence of Calvinism in some evangelical circles and the quest among American evangelicals to find strong intellectual roots.

How did the First Great Awakening revivals shape an emerging American identity prior to the Revolution?

Both the awakening and the revolution were popular movements that challenged traditional authority by appeals to the experience of people. So they both reflected some larger trends. But the awakenings were only one of many factors shaping early American identity. At the time of the American Revolution, followers of Edwards and other revivalists thought the colonies were far from being truly Christian. That's why they continued to preach revivals.

When writing about Edwards, what kind of reader do you have in mind?

I have worked hard in writing to keep multiple audiences in mind. These include the general reader who may have had little previous acquaintance with the subject, Christian and non-Christian readers, and scholars.

As a historian working outside evangelical contexts, how do you explain the phenomenon of revivals?

I present the revivals through the eyes of Edwards and his viewpoint that true revivals are the work of God and false revivals are the work of Satan, who is always trying to subvert the true by way of imitations. It is up to readers to determine whether they agree with this theological framework. I also often point out that, from an evangelical perspective, revivals are fostered by the circumstances of those who participate (God uses means). So we can study those circumstances but that does not mean that such factors provide the sole explanation. One's theological perspective will shape how one determines what the most basic forces are.

In Edwards's time and for decades thereafter, revivals spread as evangelicals read accounts of them. When did that tradition begin to tail off?

I think the tradition of reading about revivals changes when the media change. By the time of the great revival of 1858, newspapers, with the benefit of telegraph, were instantly printing reports of revivals that circulated around the nation. By the early 20th century, radio and mass advertising added ways that revivalists could quickly report their own activities and I think that trend had continued with the new media.

Do you see any evangelical historians today documenting and disseminating accounts of revival?

Many are studying third world awakenings. Andrew Walls is probably the best known. And many evangelical historians have written about revivals of the past.