In the sixteenth century, subjects were required to adopt the religion of their rulers. But two questions quickly arose:

What should Christians do when their “true religion” conflicted with the beliefs of the ruling authorities?

What should Christians do if civil authorities persecuted them?

Most Protestants answered by endorsing the idea of passive resistance: God, rather than human beings, must be obeyed. Romans 13, a passage often quoted in the 1500s, commands Christians to be in “subjection to the governing authorities. For there is no authority except from God.” Thus in some circumstances, it was admitted, individuals might refuse to obey commands contrary to God’s law. But no sixteenth-century reformer believed forcible resistance was ever justified—until John Knox came along.

Knox insisted that if the circumstances were right, Christians had the obligation to revolt against a tyrannical monarch. Previously, it had been a sin to revolt. The Scottish reformer now said that it was a sin not to overthrow an idolatrous monarch.

Knox’s views shocked European society. How did Knox arrive at such a radical position?

Son of the Prophets

Knox’s intense hatred of Catholicism, a hatred generated by the persecution of Protestants, played no small part in forming his views. But Knox was primarily a religious reformer, and his resistance theory was a means to an end: the reforming of religion in Scotland.

Knox believed that the ruler’s highest obligation was to preserve pure faith and worship. If he had found a godly ruler, a second Josiah, to establish the Reformation, no theory of resistance would have developed. But Knox found no such sovereign (with the exception of Edward VI of England). Instead, Knox spent most of his life witnessing, ... 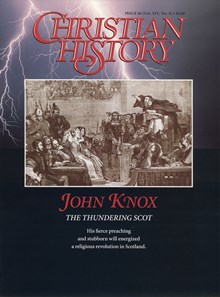