Sabas just wanted to pray where Christ had lived and died but ended up establishing the most famous monastery in the Judean Desert.
John Binns

One night in the year 478, a 40-year-old monk from Cappadocia (in what is now central Turkey) was praying in the gorge of Siloam about 10 miles southeast of Jerusalem, in the heart of the barren Judean desert. The monk's sixth-century biographer noted, "He was praying by night, and there appeared to him an angelic form in dazzling apparel who said to him … 'Stay here and make this cave your home and God will himself take care of you.' " Though the cave was some distance from a water source and accessible only by rope, the monk was overjoyed and immediately took up residence there.

After five years of solitary struggle in this cave, the monk, whose name was Sabas, began to allow others to join him, and the monastery slowly grew. Under Sabas's leadership, it would become the most important early monastery in Palestine.

Sabas was no novice at the solitary life. To escape a custody battle between two uncles, he had become a monk at age 8. Like many others, he felt called to follow a life of renunciation in the place where Christ himself had lived and died, so at age 18, he moved to Jerusalem and settled at the famous monastery of Euthymius, a few miles to the east. He soon developed a taste for taking lengthy retreats into the wilder parts of the desert, and it was on one of these sojourns that he received his vision.

As the monastery grew, access to water became an increasing problem. But, according to Cyril of Scythopolis, Sabas's biographer, another miracle occurred: Sabas was again praying by night when he saw a wild ass "digging deep into the earth with its hooves, then lowering its mouth and drinking." The spring of water he discovered provided for the needs of the monks. Then a new church was built, followed ... 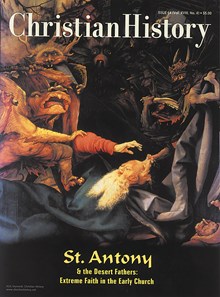