[The Gnostics] wander from the truth, because their doctrine departs from Him who is truly God, being ignorant that His only-begotten Word, who is always present with the human race, united to and mingled with His own creation, according to the Father's pleasure, and who became flesh, is Himself Jesus Christ our Lord, who did also suffer for us, and rose again on our behalf, and who will come again in the glory of His Father, to raise up all flesh, and for the manifestation of salvation, and to apply the rule of just judgment to all who were made by Him. —Irenaeus, Against Heresies

In the year 177, Pothinus, the 90-year-old bishop of Lyons (in modern France), died after Romans beat him for two days. Pothinus' crime: insisting that Christ was the Christian God. Terrible persecution had come upon the Christians of Lyons and the neighboring city of Vienne, some 16 miles south on the east bank of the Rhone River. Christians were burned alive in the amphitheater. The young servant girl Blandina, after many tortures, was finally gored to death by a bull. Each martyr sacrificed himself or herself in imitation of the passion of Christ, their Incarnate God, in the hope of resurrection. So fundamental and pervasive was their resurrection-faith that the Romans cremated the martyrs' corpses and dispersed the ashes in the river to defeat any notion that the Christians would be raised bodily from their graves.

Pothinus's successor was named Irenaeus, meaning "man of peace," and the early Christian historian Eusebius honored Irenaeus as a peacemaker in keeping with his name. But this irenic pastor and diplomat was also the second-century church's most informed, prolific, and theologically profound opponent of Gnosticism.

GnosticismHeresyHistoryTheology
Issue 96: The Gnostic Hunger for Secret Knowledge, 2007
Next Article
No Other Gospel 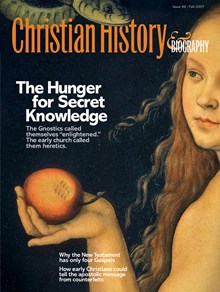 This article is from Issue 96 of the Christian History archive.