Home > 2018 > October
Church & CultureOctober 10, 2018
What The Church Can Learn From The People Of New York About Being Repairers Of The Breach
When we’re at our best, the church isn’t just another group on one side of the partisan political conflict that pits people against each other.
Karl Vaters
Read as Single Page
Page 1 of 2 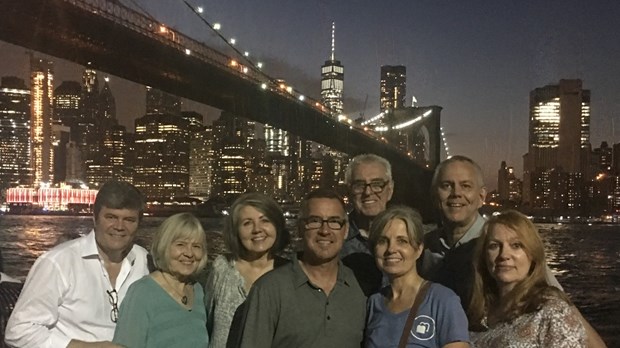 You taught me how to be a better Christian, pastor and peacemaker this week.

For the past five days, my wife, my sisters, their husbands and I walked all over New York City with my parents as we celebrated their 60th anniversary.

New York is filled with some of the most amazing sights, sounds and spectacles on earth. But more than that, it’s filled with an extraordinary mix of people.

As grateful as I am for the chance to see the Statue of Liberty and the Empire State Building, and to honor the fallen at the World Trade Center, the most memorable parts of this trip were the people we met.

I had a random conversation about writing and entrepreneurship with an NYU student who had set up a table at Washington Square Park to sell his self-published book of poems.

Shelley and I listened to the stories of a 95-year-old Romanian man who was in town for the 100th anniversary of the reunification of Romania.

Our whole family received genuine, warm hugs, smiles and prayers from fellow members of the body of Christ in one of the most racially diverse churches on earth – Brooklyn Tabernacle.

We got to meet up with Dave and Cheyenne, a Cornerstone couple who are having a once-in-lifetime adventure living in Brooklyn. Jack, a Cornerstone alum who’s taking a shot at making it on Broadway. And we got to see Cornerstone’s own JR rock the house with his band who just happened to be playing in New York while we where there.

But perhaps most memorably, we got to chat for about 15 minutes with a custodian at Ellis Island. This African-American grandmother told us the story of her family. Her face beamed as she showed us the grainy black-and-white photo of her white great-grandfather and black great-grandmother who had moved to New Jersey because blacks and whites couldn’t get married in Italy.

During a week in which the country was divided over another political, sociological and moral struggle, New York showed our family the best of America.

During a week in which the country was divided over another political, sociological and moral struggle, New York showed our family the best of America.

The Church Can Rise Above Partisanship

When we’re at our best, the church isn’t just another group on one side of the partisan political conflict that pits people against each other.

We’re the ones who should be a shining light of hope that rises above it all.

What The Church Can Learn From The People Of New ...