Congregations take ‘all ready but not yet’ approach to Texas rains of biblical proportions.
Kate Shellnutt|August 28, 2017 08:49 AM 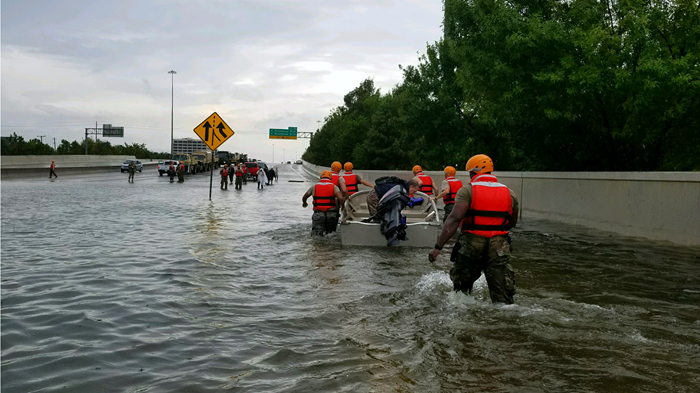 It takes a lot to cancel church in the shiny Bible Belt stronghold of Houston, Texas, home to more megachurches than any city in America. Specifically, 9 trillion gallons of rain in a weekend.

Hurricane Harvey shut down Sunday services from downtown to the sprawling suburbs, where churches replaced typical worship gatherings with sermon videos posted on Facebook or simply messages to stay safe.

The congregations were glad they did when unprecedented rain levels ended up blocking many routes and leaking into some church buildings by Saturday night and Sunday morning.

“We have five services on the weekend, and I cannot ever remember canceling all services,” said Chris Seay, lead pastor at Ecclesia. “We asked our community to stay home with family and to look out for their neighbors.”

Gregg Matte, pastor at Houston’s First Baptist, spent the weekend checking in with members of his congregation—from elderly evacuees to a local TV meteorologist—with whom he has been texting Bible verses in between broadcasts.

“I don’t know that I’ve ever prayed like that, like I prayed today, just asking God to have mercy on us,” Matte said in a Facebook video Sunday evening. “Just make the rain stop.”

Houston Christians did more than pray from the dry refuge of their homes or evacuation spots. Clergymen were featured in a couple viral news reports from Sunday: a preacher who checked submerged cars for trapped drivers, and a priest who tried to paddle his way to Mass at Houston’s Catholic Charismatic Center.

“Right now we are getting supplies together to take to a few area shelters. Baby stuff seems to be in short supply,” said Jason Crandall, pastor of CityView Church in Pearland, a southern suburb.

However, there’s only so much they can do right now, with many churches themselves affected and more rain on its way. For example, celebrity pastor Joel Osteen’s Lakewood Church, which meets in a 16,800-seat arena, cannot open its doors to house displaced families because the church itself is inaccessible due to the flooding.

So churches eager to help have taken an “already-but-not-yet” approach, rallying resources for more large-scale and long-term recovery, even if they have to hold off on major outreach right now.

“We are following the guidance of our officials and hunkering down in order to remain safe while they focus on those in the most immediate danger,” said Andrew Doyle, bishop of the Episcopal Diocese of Texas. “We want to emphasize that we need to wait until the danger has passed to make our response so as not to complicated further the ongoing rescue operations.”

Churches serving as unofficial shelters can quickly find themselves overwhelmed by demand and logistics. After several members tweeted Sunday that First Baptist Church North Houston had opened its doors to stranded residents, the building ended up with 300 evacuees, not enough food, and no working toilets. “It’s frustrating, but I’m just relying on God to fulfill his promises to us,” youth pastor David McDougle told The Washington Post. “We’re all praying.”

Nine churches in the Houston area served as temporary shelters for the city until survivors could be moved safely to other venues, such as the downtown convention center where officials are coordinating relief efforts. One of them, Fallbrook Church in north Houston, has already transported all of its evacuees and closed.

Pastor Kirbyjon Caldwell, a former faith adviser to George W. Bush and pastor of Windsor Village United Methodist Church, announced that as of Monday, his church would shelter residents affected by another round of evacuations.

Dozens of churches have launched websites where people can request relief, sign up to volunteer, or make a donation, so they can mobilize once the storm clears.

Seay at Ecclesia has reached out to fellow pastors to request that churches send relief teams to help:

We will begin organizing teams to help as soon as possible. I don’t know what the full impact on the city will be. I don’t know how much longer the storm will continue. What I do know is that we need your help. And as a fellow pastor, let me say this—we need it soon.

If you would be willing to send a team to Houston equipped with tools and supplies to assist in cleanup and recovery, Ecclesia will provide housing for you. We are also looking for opportunities to provide breakfast each morning as well as morning devotions and prayer for your team.

Once the storm is over, the big work will begin. As CT has previously reported, the faith community can get to work before FEMA and other national groups since they have churches ready on the ground. National Voluntary Organizations Active in Disaster (National VOAD) represents more than 50 denominational relief agencies and secular charities that make up the “faith-based FEMA.”

A team from Samaritan’s Purse arrived Sunday in Victoria, about two hours south of Houston, where they slept without power or water in a local church. After meeting with officials Monday morning, the aid organization will send out assessors to begin gauging damage.

“We will do as much as we can,” said Kristin Koning, an assistant program manager with Samaritan’s Purse, which is already signing up volunteer teams online.

Jamie Aten, director of the Humanitarian Disaster Institute at Wheaton College, shared four spiritual survival tips to keep in mind amid a storm like Harvey. “When we seek spiritual community, we can experience God’s presence, provision, and love in tangible ways,” he wrote. “We can choose to allow pain to isolate from others, or to bring us together.”