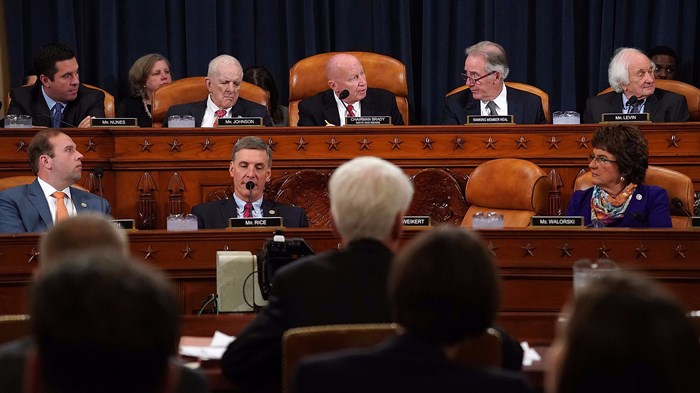 A popular tax credit for adoptive families that was controversially cut by House Republicans in their initial tax reform plan has finally been restored.

Meanwhile, the adoption benefit will be preserved in the tax proposal released by Senate Republicans today, report The Washington Post and The New York Times. Senators Ted Cruz and John Hoeven confirmed to reporters that the credit would remain.

This afternoon, the House Ways and Means Committee voted 24–16 to add the credit back in.

“Now, I know Americans who adopt are not doing this for the tax benefit. We’re doing it because we want to provide a safe and loving home for a child. I know from personal experience the adoption process can be expensive and time-consuming and ultimately so rewarding. And I know the adoption tax credit is important to many members of our committee, Republicans and Democrats.

We’ve had very thoughtful discussions about it over the past few days. So with this amendment, we’re proposing to preserve this credit … to ensure that parents can continue to receive additional tax relief as they open their hearts and homes to an adopted child.”

Russell Moore, president of the Ethics and Religious Liberty Commission (ERLC), told CT that he was “very thankful.”

“This is not just some other policy, but a lifeline to children in need and to families trying to welcome them into their homes,” said Moore. “It is in the national interest to see to it that vulnerable children are protected, not exiled in a system. I’m glad to see that interest upheld rather than torpedoed in the Senate’s proposal.”

“The Republican Party has been and always will be the party of life,” he stated. “The adoption tax credit has enormous symbolic, practical, and humanitarian meaning and purpose.”

Born in 1981, the adoption tax credit began as a $1,500 tax deduction applicable only to children with special needs. In 1997, the benefit was changed to a tax credit that would adjust for inflation. Last year, adopting households could receive up to $13,570 as reimbursement for costs such as adoption and attorney fees, court costs, and travel expenses—provided their annual income was $243,540 or less.

Today, Senate Republicans answered with their own tax overhaul, which would keep the mortgage interest deduction, eliminate the ability to deduct state and local taxes—and keep the adoption credit.

The competing House and Senate bills will have to first be reconciled before they can be sent to the White House for President Donald Trump’s signature. But in order to pass muster with the slimmer Republican majority in the Senate (52 to 50), it’s likely that the final version will look more like the Senate’s plan.

That’s good news for adoption supporters, who were upset by the House proposal.

“We have met hundreds of families who want to adopt, but can’t do so because of the significant costs,” wrote Steven Curtis and Mary Beth Chapman for the Post. “The average adoption costs between $25,000 and $40,000, and for many families, this is an insurmountable barrier.

“Losing the adoption tax credit, a vital and practical approach to overcoming the financial cost that prohibits many families from adopting, would be catastrophic for thousands of American parents hoping to adopt and the precious children waiting for a family,” continued the couple, who cofounded the adoption advocacy organization Show Hope.

Adoption saves the government “between $65,000 and $127,000 for every child who is adopted rather than placed in long-term foster care,” stated the Southern Baptist Convention’s ERLC.

It was also a top priority for Vice President Mike Pence while he was governor of Indiana. He “got the ball rolling” on the Indiana Adoption Tax Credit, then signed it into practice in 2014. “We’re well on our way in Indiana to becoming the most pro-adoption state in America,” he said last year during a vice presidential debate.

The cut to the adoption credit was condemned by nearly everyone, from Focus on the Family president Jim Daly (“We shouldn’t be placing the burden of these tax cuts on orphan children.”) to National Review Institute senior fellow David French (“The credit is one of the government’s most important pro-life policies.”) to Republican Senator Ben Sasse (“Being pro-life means being pro-adoption.”) It even united pro-life and gay-rights advocates.

Defending the cut was budget architect Brady, a House Republican who has himself adopted two sons.

“This credit is not working,” he told the Post, saying that those who don’t pay enough in taxes or don’t itemize can’t claim the credit.

On the other hand, raising the child tax credit to $1,600 per year, along with cutting taxes, would give “families more in their paychecks, especially the middle-class families that are crucial for adoption,” he said.

A Democratic attempt to restore the adoption credit was defeated on Tuesday.

The House tax reform plan was only out five days before Brady said the adoption tax credit might be added back in.