Evangelical and Catholic pro-life groups come together for the first post-Roe march.
Megan Fowler|January 20, 2023 07:00 AM 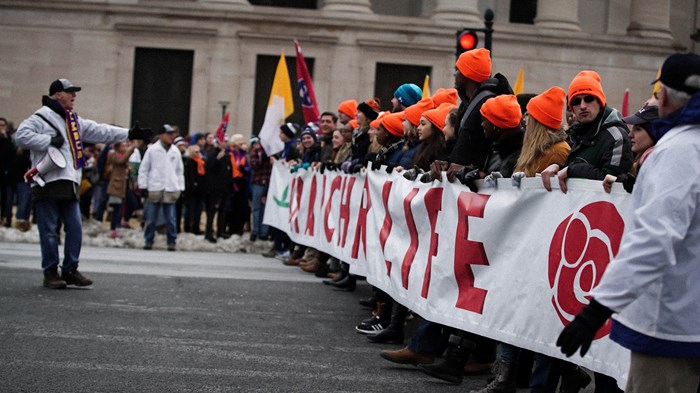 At the 50th annual March for Life—the first national march since Roe v. Wade’s reversal last June—the next generation of pro-life advocates will lead the walk to the US Capitol.

Students from Liberty University will hold the March for Life banner at the front of the procession on Friday. Liberty said more than 500 of its students will attend the event.

Though founded and supported by Catholics, evangelicals have become more involved as March for Life participants and speakers over the years, with Protestant groups adding events to correspond with the annual pro-life demonstrations in Washington.

This year, evangelical leaders like Franklin Graham of Samaritan’s Purse and retired NFL coach Tony Dungy will speak at the March for Life rally alongside Catholic advocates like bishop Michael Burbidge of the Diocese of Arlington and actor Jonathan Roumie, who portrays Jesus in the streaming series The Chosen.

Morse Tan, dean of the Liberty University School of Law, will march with the Liberty students as they carry the banner before tens of thousands of participants.

“I think it’s unusual for an evangelical institution to be asked to carry the banner and lead [the march], but it’s an honor to have been asked,” he said. Liberty is located about three hours from DC, in Lynchburg, Virginia.

Liberty student Summer Smith, president of the school’s Students for Life chapter, will address the premarch rally at the National Mall. A music major from Rincon, Georgia, she wants her generation to embrace this pivotal moment in the pro-life movement.

“This is such an important time, especially after the reversal of Roe v. Wade, for telling women they have other options and are loved,” she said. “That’s the message: Children are loved, women are loved, and the fathers are loved.”

While evangelicals are the religious group with the strongest stance against abortion, CT reported last year that statistics are beginning to show an age gap between young and older generations. A majority oppose abortion rights across age groups, but those under 35 are growing more open to pro-choice policies while older groups are becoming more opposed.

That was based on research before the Dobbs ruling, though. With Roe v. Wade overturned, there’s new momentum on both sides animating new political and social strategies around abortion.

Young Christians opposed to abortion, like the Students for Life chapters at Liberty and other college campuses, tend to see the cause as an issue of human rights and justice, positioning their stance within a broader life ethic.

Organizers including Students for Life and the Alliance Defending Freedom say the sold-out summit “represents a historic move of unity in the pro-life movement, bringing national pro-life organizations together to harness the passion of the most dedicated among those who pilgrimage to Washington D.C. for the National Pro-Life March.”

About 2,000 are expected to attend in person. Sponsors include evangelical groups such as Focus on the Family, Samaritan’s Purse, The Freedom Center at Liberty University, and Heartbeat International alongside Catholic ministries like Sisters for Life, Catholic Answers, and Priests for Life.

The 2023 March for Life theme, “Next Steps: Marching into a Post-Roe America,” hints at the tone and tactics of the pro-life movement in this new era.

March organizers hope not only to celebrate the first March for Life after the Dobbs v. Jackson decision overturning Roe v. Wade and ruling that abortion can be regulated, but to mobilize pro-life advocates to join the fight for state-level restrictions on abortion.

“With Roe now behind us, we are empowered to save countless innocent American lives by continuing to advocate for commonsense protections at the state and federal level, educating Americans on the intrinsic dignity of all human life,” said Jeanne Mancini, president of March for Life Education and Defense Fund.

This year, Students for Life printed signs with the words “Let Their Hearts Beat” over a US map, a reference to state “heartbeat bills” that restrict abortion around six weeks. The group also has red signs and hoodies with the slogan “Protection at Conception.”

Smith, who has attended two previous March for Life events, is excited to spend the weekend with others who share her passion for ending abortion.

After speaking at the rally and leading the march to the Capitol, Smith will attend the National Pro-Life Summit on Saturday. She is looking forward to “letting people know they have other options, and being a loving voice.”