The 'Ample' Man Who Saved My Faith

G.K. Chesterton propounded the Christian faith with great wit—and sheer intellectual force.
An exclusive excerpt from Philip Yancey's new book, Soul Survivor: How My Faith Survived the Church.September 3, 2001
This article is from the September 3 2001 issue. Subscribers can read all of CT's digital archives.
If you had asked me during my college years where I would end up, "Christian writer" would fall last on my list of options. I would have recounted the lies my church had told me about race and other matters, and poked fun at its smothering legalism. I would have described an evangelical as a socially stunted wannabe—a fundamentalist with a better income, a slightly more open mind, and a less furrowed brow. I would have complained about the furloughed missionaries who taught classes in science and philosophy at the Bible college I attended and who knew less about those subjects than my high school teachers. That school tended to punish, rather than reward, intellectual curiosity: one teacher admitted he deliberately lowered my grades in order to teach me humility. "The greatest barrier to the Holy Spirit is sophistication," he used to warn his classes.

At that same Bible college, however, I first encountered the writings of C.S. Lewis and G.K. Chesterton. Although separated from me by a vast expanse of sea and culture, they kindled hope that somewhere Christians existed who loosed rather than restrained their minds, who combined sophisticated taste with a humility that did not demean others and, above all, who experienced life with God as a source of joy and not repression. Ordering tattered used copies through bookshops in England, I devoured everything I could find by these men, one an Oxford don and the other a Fleet Street journalist. As Lewis himself wrote after discovering Chesterton while recovering in a hospital during World War I, "A young man who wishes to remain a strong atheist cannot be too careful of his reading."

Their words sustained me as a lifeline of faith in a sea of turmoil and doubt. I became a writer, ...

Join in on Facebook
Tags:
None
Issue:
September 3 2001, Vol. 45, No. 11, Pg 66
More From:
An exclusive excerpt from Philip Yancey's new book, Soul Survivor: How My Faith Survived the Church.

The 'Ample' Man Who Saved My Faith

The 'Ample' Man Who Saved My Faith
expand
hide this 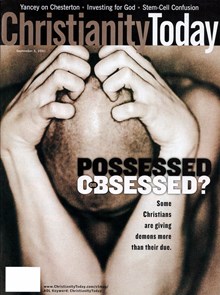 This article is from the September 3, 2001 print issue. Subscribe to continue reading.