Back to the Garden

Row by row, urban Christians learn to bear literal and spiritual fruit.
Tony CarnesJuly 27, 2011
Image: Tony Carnes
This article is from the July 2011 issue. Subscribers can read all of CT's digital archives.

On a recent sunday, Steven Hebbard got stung by a bee. He seemed deliriously happy. "I got stung! It stung! Whoopee!" Hebbard wasn't crazy. He was just excited that his group of gardeners had put in their first beehive.

The day before, Hebbard had trained 19 students from Gateway Community Church, an Austin megachurch, on how to garden alongside the homeless and impoverished. And earlier this year, Hebbard broke ground on a new garden on an acre of land for the poverty-stricken refugee community living in East Austin. Most of the refugees are Nepalese or Bhutanese. "After looking at the space and realizing they had at least an acre that could be used for community gardening, I contacted the apartment complex manager, and he gave us the go-ahead."

Thirty refugees—about half of them with a Hindu background—came to the kickoff. Christian refugees living nearby joined in, and many of them are now active at the new International Restoration Church.

"After the garden looked amazing in its fully planted form, I fully expected all the refugees to take off," Hebbard told Christianity Today. "Some did, but most stuck around. The day was an amazing success."

"Back to the garden" is a new way of doing church that adds a missional tweak to traditional gardening. Congregations and ministries are planting sweet corn around their sites, mobilizing gardening networks for the needy, and rediscovering the value of low-tech, high-touch community.

Several years ago, Hebbard caught a vision for urban gardening and launched the Karpophoreō Project (KP), inspired by the Greek phrase in Colossians 1, "bearing fruit in every good work." His vision ...

Back to the Garden

Back to the Garden
expand
hide this 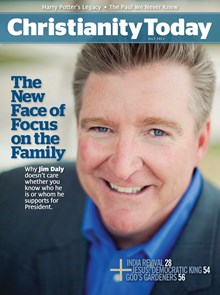