The child of a Mexican father and a Brazilian mother who met in an English class in Chicago, Keila Natilde Lopez has always wanted to be a doctor. But Hispanic doctors are rare: In her class at the University of Illinois, 10 Hispanic students started out as premed majors; two made it to medical school. At graduation from med school, she was the last one standing.

“Throughout the entire process, I felt an urge that there are so few of me that make it—I can’t just be the doctor that sees one kid at a time, so I have to do more.” 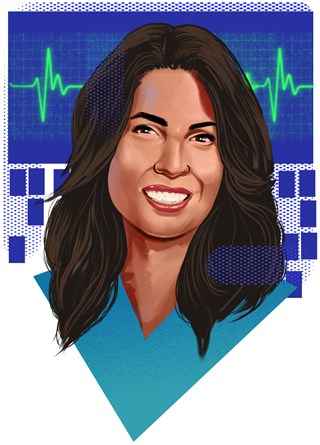 During her residency, a flier came across her desk. “God is kind of funny,” Lopez recalls. It said something like: “Do you feel like you want to do something more?” It advertised a minority health policy program at Harvard.

After graduating from the program, she felt so inspired that she almost abandoned cardiology for public health. Instead, she discovered how to apply her knowledge with the passion she gained.

Next, she began a fellowship at Baylor College of Medicine, where she noticed a pattern in her patients. “How come the kids that I see that have this problem are all Latino?” Lopez wondered. Today, she explores what might be causing a cluster of cases of congenital heart disease among Latinos.

Lopez has now seen over 1,000 patients, beginning in utero through an infant surgery. As some of her patients are growing into their teen years, she noted that depression, anxiety, or ADHD are high among kids with congenital heart disease or cardiac arrythmias. Further, “rates of anxiety and depression are substantially lower if you’re black, Hispanic, or Asian, which may mean an under recognition or diagnosis of emotional health in these populations,” she said.

Lopez explained how she has paid the “minority tax” in her career. For example, during her residency, she often doubled as the translator for Spanish-speaking patients. “There’s unspoken additional duties and challenges that go along with being in a white, male-dominated (field).”

She also often participates in diversity and inclusion initiatives and currently is creating the health track for the National Diversity Council. “You feel guilty if you say no. You feel, ‘This is what I’m supposed to be doing,’” she said, yet these projects don’t count toward achieving faculty promotion.

But her faith fuels her ambition with fearlessness, she said. “I feel I was placed here for a reason, and he’s brought me this far. If God’s going to open this door, he’s going to keep on guiding me.”