Last election, about 70 percent voted for Bolsonaro, the conservative former army captain who pledged himself to “Brazil above everything, God above everyone.”

Caroline Vidigal de Albuquerque, an evangelical who works as an executive secretary in Rio de Janeiro, was one of them. She told CT she liked the way Bolsonaro stood for “Christian thought, contrary to Marxism.” She believed left-wing voices had dominated for too long, and she noticed when the Catholic politician shared the stage with evangelical and Pentecostal leaders during the campaign.

As she prepares to head to the polls again, though, Albuquerque will be looking at the president’s record and comparing it to Lula’s time in office, from 2003 to 2010.

“We can compare the actions with the speeches of the electoral period,” she said. “In this case, as in life, reality must always impose itself.”

Many of Albuquerque’s fellow evangelical voters—who make up about 30 percent of the Brazilian population—may also prioritize different issues this time around. Jorge Henrique Barro, a Presbyterian pastor and theology professor at Faculdade Teológica Sul Americana, says he thinks economic concerns might win out over ideological ones in 2022. Evangelicals tend to be poorer in Brazil and have been hard hit by inflation and unemployment.

Between COVID-19 and the impact of the Russian invasion of Ukraine, inflation exceeded 11 percent in April, the highest rate in two decades. Unemployment is about 9 percent in September, even after the economy recovered slightly from the pandemic.

“Excluded, poor, Black, low-income, and low-education population, exposed to housing and health risks,” Barro said. “The biggest demands of these voters have to do with their basic needs.”

The most important question for them at the polls, Barro said, will likely be “Who is most capable of helping Brazil out of the dramatic situation in which it finds itself?” 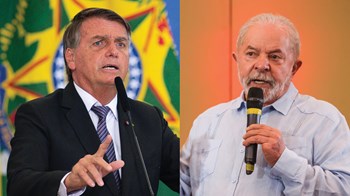 Evangelicals are not monolithic, though. In the national congress, there are 196 deputies and seven senators who belong to the Frente Parlamentar Evangélica (Evangelical Parliamentary Front). They are spread across 19 different political parties. The largest group, 42, are part of Bolsonaro’s right-wing Liberal Party, but that’s not a majority.

While most evangelicals support key pieces of the Liberal Party agenda—defending traditional families, freedom of religion, and the unborn—there are issues where they diverge. Bolsonaro’s government has sought to loosen environmental regulations, for example, while 85 percent of evangelicals in the country say that attacking nature is a “sin against God.”

Some evangelical pastors continue to back Bolsonaro but are clearer, this election, about expressing reservations.

“I don’t wear a T-shirt with his face printed on it,” Jaime Soares, an Assemblies of God pastor in Rio de Janeiro, told the Los Angeles Times. But, he added, “he is the one upholding our values.”

In the last presidential elections, polls showed that only 19 percent of evangelicals took political instructions from the pulpit. But Bolsonaro has clearly attempted to visually connect himself to Christian leaders. He has appeared alongside well-known televangelists and Pentecostals, including Silas Malafaia, Marcos Feliciano, and Edir Macedo, the bishop in the largest prosperity-preaching denomination in the country. The president also participated in the March for Jesus, lending the event significant prestige.

More significantly, in 2021 Bolsonaro delivered on a campaign promise and appointed an evangelical to the Supreme Court. He described the former justice minister, who has a doctorate in the rule of law and a master’s in anticorruption strategies from the University of Salamanca, Spain, as someone who is “terribly evangelical.”

Pentecostal leaders—especially those who preach prosperity—seem to have grown closer to the president in the past four years. Some leaders of the Presbyterian Church of Brazil are also quite close to Bolsanaro, have used their pulpits to urge people to vote for him, and have considered taking disciplinary measures against Christians who support progressive or left-wing candidates.

Other Christians in the country, however, have been sharply critical of how closely some church leaders ally with Bolsonaro. It is good for evangelicals to be involved in politics, they say, but there’s danger in devotion to power.

“This community aspires to political power,” said Peniel Pacheco, an Assemblies of God pastor and theology professor who served previously in congress. “It seeks to enrich itself with the benefits of the state to guarantee economic and fiscal advantages for its denominational strongholds.”

Recently, some evangelicals have been caught up in corruption scandals. In March, newspapers obtained audio of Milton Ribeiro, a Presbyterian pastor and head of the education department, apparently confessing to influence peddling. The Attorney General’s Office launched an investigation.

“The church was too far from power, and now it is too close,” said William Douglas, a federal judge in Rio de Janeiro. “We need to have a political life, but we cannot let the church be captured.”

Some Christians hope the past four years will prompt evangelicals to reflect on their witness and their calling. They are encouraging reevaluation ahead of the coming election.

“I hope and expect that the evangelical church will do its homework, so that it is able to act more efficiently in the public arena, more effectively in disseminating the values of…citizenship,” said Ed René Kivitz, pastor of a Baptist megachurch in São Paulo. “The greatest contribution of the evangelical church to Brazilian democracy is the preservation of the environment and democratic spirit of its communities.”

Whether or not Lula can take advantage of this and attract evangelical voters remains to be seen. Many just don’t think he will uphold their values.

In April, before campaigning began, Lula defended the decriminalization of abortion in Brazil. He said abortion was part of health care. After fierce criticism, the candidate spoke about how he’s personally opposed to abortion.

For the most part, he avoids cultural issues and focuses on the economy.

“I do not think it is impossible for the [Workers’ Party] to open paths to negotiation with evangelicals,” said anthropologist Juliano Spyer, who wrote Povo de Deus: Quem São os Evangélicos e Porque eles Importam?, a book on evangelicals and contemporary Brazil.

But that may not happen until the second round of voting narrows the field from 12 candidates to two.

“Five months is too short a time for this more effective approach,” Spyer said. “The pit is very deep.” The first vote will be held on October 2.

Even if evangelical voters don’t feel a natural, organic connection with Lula and the Workers’ Party, more than a third are considering supporting the former president. During his two terms, he successfully introduced social reforms that lifted 20 million people out of acute poverty while also reducing the national debt. The middle class grew nearly 50 percent during his presidency.

The former president was caught up in an expansive investigation into a corruption scandal, though, and was convicted in 2018 of accepting bribes from an engineering firm that wanted to win a lucrative contract with the state-owned oil company Petrobras. He was sentenced to 12 years in prison, but the conviction was overturned by the Supreme Court on technical grounds, involving jurisdictional and procedural errors.

The substance of the charges and their significance in 2022 divides the the nation, and evangelicals are split too.

Rodrigo Cavalcanti Rabelo, an evangelical who voted for the Workers’ Party in 2018, says he’s tired of Christians embracing “hostile bipolarity.”

He hopes that in this election, evangelicals remember how to talk to each other as brothers, sisters, and citizens.

“The capacity for dialogue is essential,” he said, “to overcome the serious economic and social situation we are experiencing.”

Marcos Simas has a PhD in religious studies. Carlos Fernandes is a reporter in Brazil.

This article has been updated from the print edition to reflect the most recent polling data and unemployment numbers when it was posted online.

Back to Bolsonaro? Evangelicals Hesitate Ahead of ...