From Jesus to Mary and Back Again: The History of the Annunciation 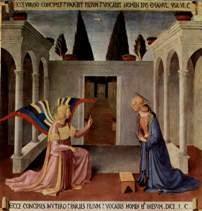 From Jesus to Mary and Back Again: The History of the Annunciation

The surprising reason it falls during Lent, and why it has been important for fighting heresy and abortion.
Ted Olsen

Over at Christianity Today I've just published an article on a subject that has long puzzled me: Why don't pro-life evangelical Protestants talk much about the Annunciation? And if we believe that life starts at conception, then why are we more likely to associate the Incarnation with Christ's birth (Christmas) than with the Annunciation (conception)?

Some familiar names for Christian History readers—N.T. Wright, Darrell Bock, Scot McKnight, and others—were kind enough to reply, and I'm grateful for their insights. In fact, I received more response than I had expected, and as a result wasn't able to include some of the more interesting church history aspects of the discussion.

Among them: Why March 25? The answer at first seems obvious: It's nine months before Christmas. So many writeups on Annunciation assume (as I had) that once the church placed Christmas on December 25, it was a simple matter of counting backwards to mark Annunciation and Jesus' conception.

But Muhlenberg College historian William J. Tighe argues that such a history gets things backwards. Before trying to determine either the dates of Jesus' birth or conception, they tried to determine the date of his death. Tighe's brief overview, which was published in Touchstone, is worth reading, as is his sequel of sorts in Touchstone's current issue. But for our purposes here, what you need to know is that Greek Christians in the East said Jesus died April 6 and Latin Christians in the West said March 25.

At this point, we have to introduce a belief that seems to have been widespread in Judaism at the time of Christ, but which, as it is nowhere taught in the Bible, has completely fallen from the awareness ...

From Jesus to Mary and Back Again: The History of ...