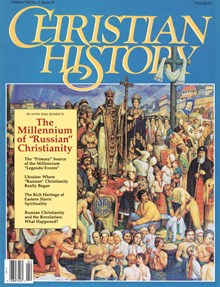 April 2, 742: Charlemagne (Charles the Great) is born. When Pope Leo III crowned him "Emperor of the Romans" on Christmas Day, 800, Charlemagne announced, "Our task [as secular ruler] is externally, with God's help, to defend with our arms the holy Church of Christ against attacks by the heathen from any side and against devastation by the infidels and, internally, to strengthen the Church by the recognition of the Catholic faith." Indeed, within his kingdom he was far more influential in church ...

More from April 2
Most Popular
Give Today
Christianity Today strengthens the church by richly communicating the breadth of the true, good, and beautiful gospel.
Learn more
© 2020 Christianity Today - a 501(c)(3) nonprofit organization.