When Schwenckfeld died in 1561, a number of small groups of his followers were located in south Germany around Strasbourg, in the Ulm-Augsburg area, and in Silesia.

By the close of the Thirty Years War in 1648, however, only the Silesian remnants remained. At the opening of the eighteenth century there were less than 1,500 persons left in Lower Silesia who adhered to the tradition.

In 1719 the Emperor of Austria established a Jesuit mission to bring these remaining Schwenckfelders into the Catholic Church. The mission was directed by two priests, Johann Milan and Carolus Regent, who immediately began to impose fines and imprisonments.

A deputation sent to Vienna to plea for their case could achieve nothing, so in 1726 over 500 persons fled Silesia, leaving their property and all the possesions they could not carry with them. They filled mangers and feed troughs before they left; it might be days before their absence was realized and the animals would be fed again.

Some found refuge in the Saxon city of Görlitz; others went to the estate in Saxony of Count Nikolaus Ludwig van Zinzendorf who had already offered sanctuary to the Moravians. [The story of Count Zinzendorf and the Moravians appeared in the first issue of CHRISTIAN HISTORY.] Here the majority remained until 1734, when political pressures were brought to bear on the Count to withdraw his support.

The largest contingent of the Schwenckfelders (some 180 persons) left Saxony in April 1734, travelling down the Elbe and across to Holland. There they boarded a British vessel, the St. Andrew, and sailed for Pennsylvania where several of their co-believers had fled a few years earlier.

They arrived in Philadephia Harbor on September 22 and two days later, ...

Jack R. Rothenberger
Next Article
The Hard Journey to America

Freedom in Pennsylvania
Hide This 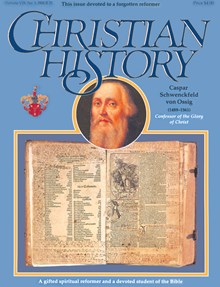