Four key differences between the Orthodox and Protestants.
Daniel B. Clendenin

Most Americans think of religion in terms of the "Big Three"—Protestants, Catholics, and Jews. But the Orthodox? Who are they? Like Protestants, they're not one monolith with uniform beliefs. On the other hand, there are distinctives that set them apart from Protestants.

Daniel Clendenin, on staff with InterVarsity Christian Fellowship at Stanford University, has studied those distinctives, especially in their Russian Orthodox form. He has set them down in detail in Eastern Orthodox Christianity: A Western Perspective (Baker, 1994), and here in summary.

Orthodoxy has suffered from cultural invisibility in America. It simply does not register on most of our cultural radar screens. Some confuse it with Catholicism. But Orthodoxy is distinct from Catholicism and enjoys a unique history and theology. The Russian Orthodox theologian Vladimir Lossky (d. 1958) once referred to the "dogmatic dissimilarity" between the Christian East and West.

What did Lossky mean? Let me summarize four ways in which faithful Christians, Orthodox and Protestant, have each tended to do theology differently.

During my first semester as a visiting professor at Moscow State University (1991-1992), I taught a seminar on C. S. Lewis's Mere Christianity. The book had been translated into Russian, and its notable influence in the lives of many Western Christians made it a sure bet, I thought, to have a significant spiritual and intellectual impact. I could not have been more wrong.

Toward the end of the term, one student complained that Lewis was "too logical and rational." A year later in another seminar on Lewis's The Problem of Pain, a student made a similar comment: "I do not like Lewis's position that we must use logic to discuss the question of evil. Problems relating to God transcend human logic." These remarks point to a fundamental difference between the theologies of the Orthodox and Protestants.

In one of the most important texts of Orthodoxy, Exposition of the Orthodox Faith, John of Damascus (655-749) observed, "It is plain, then, that there is a God. But what he is in his essence and nature is absolutely incomprehensible and unknowable. … All that is comprehensible about him is his incomprehensibility." This is a fine example of what has been called apophatic theology (from the Greek apophasis or "denial"). Apophatic theology tries to describe what God is not. For example, the theologian who says "God is not finite; he is not limited in time or space" is practicing apophatic theology.

Lossky says apophaticism is "the fundamental characteristic of the whole theological tradition of the Eastern Church." He once defined it as "the breakdown of human thought before the radical transcendence of God … a prostration before the living God, radically ungrasp-able, unobjectifiable, and unknowable."

In Orthodoxy this incomprehensible mystery of God is a cause for praise and celebration, and theology is an extension of spirituality or worship. The aphorism of Evagrius of Pontus (346-399) expresses this nicely: only the one who prays is truly a theologian, for the true theo-logian prays truly.

By way of contrast, for Protestants the mystery of God is often a cause for analysis and explanation. We tend to be uncomfortable with mystery and are even trained to expunge it by finding answers. As heirs of the European Enlightenment, we believe that all truth claims, including theological propositions, must pass the test administered at the bar of reason.

One thinks, for example, of the influential legacy of René Descartes (1596-1650), who attempted to ground all thinking in "methodical doubt" and to accept nothing as true unless he perceived it as clear, distinct, indubitable, and certain.

In the words of the contemporary German theologian Wolfhart Pannenberg: "Every theological statement must prove itself on the field of reason and can no longer be argued on the basis of unquestioned presuppositions of faith." In this Western intellectual scheme, theology is best understood as a form of knowledge or even a "science."

In his book The Illuminating Icon, Anthony Ugolnik points to two conversion stories to illustrate another basic difference. In the Russian Primary Chronicle (twelfth century), the story is told of Prince Vladimir of Kiev: he embraced Orthodoxy (in 988) after his emissaries described to him the liturgical beauty of worship they experienced in the Orthodox Church of the Holy Wisdom in Constantinople. By way of contrast, Augustine (354-430), in his Confessions, recounts how he heard the voice of a child telling him to "take up and read" a Bible that lay open at Romans 13:13. The contrasting conversions signal a key difference: in the Orthodox East, aesthetics play a major role in theology; the West prefers to work primarily with texts.

One can sense this difference simply by entering an Orthodox church: icons and frescoes cover virtually every square inch of the walls. The priest is resplendent in his vestments; his sonorous voice chants the liturgy. Bells chime, candles flicker, and incense fills the air.

Icons epitomize all this. Former librarian of the Library of Congress and Russian scholar James Billington once referred to icons as "the most revered form of theological expression" in early Russian Orthodoxy. Orthodox theology, he said, tends to "crystallize in images rather than in ideas." Icons are thus a "theology in color," which is why when an Orthodox priest was once asked why he did not do more doctrinal teaching in his church, he responded, "Icons teach us all we need to know."

Protestantism, on the other hand, insists upon the written word. During the Reformation, the spoken sermon gradually replaced the Catholic Eucharist as the defining moment of the liturgy for Protestants. John Calvin (1509-1564) said, "Images cannot stand in the place of books," and he whitewashed the walls of Reformed churches in Geneva. According to the Puritan John Foxe (1516-1587), "God conducted the Reformation not by the sword, but by printing, writing, and reading."

No wonder that the Orthodox Alexei Khomiakov (d. 1860) once complained that in Protestantism "a scholar has taken the place of the priest." Likewise, the Orthodox theologian Sergei Bulgakov (d. 1944) once described Protestant Christianity as a "professorial" religion in which the central figure is the scholar-professor.

Away with sola scriptura

When Martin Luther burned the books of Catholic canon law at the Elster Gate of Wittenberg on December 10, 1520, he did so to dramatize a point that has become fundamental to Protestant identity: Scripture has a unique and normative value, and whatever value "tradition" has, it is secondary and derivative. Indeed, Luther wrote, "What else do I contend for but to bring everyone to an understanding of the difference between the divine Scripture and human teaching or custom, so that a Christian may not take the one for the other and exchange gold for straw, silver for stubble, wood for precious stones?"

Hence the great watchwords of the Reformation—sola scriptura! This does not mean Protestants neglect tradition, only that tradition is submitted to the higher authority of the Bible.

Furthermore, Protestants insist that God speaks to the reader of the Bible in a direct manner rather than being mediated by the church. Just as the Reformers placed Scripture above tradition, they placed the Scriptures above the church. It was the Word of God that gave birth to the church, Calvin insisted, and not the other way around.

Most Orthodox believers understand things differently. According to the late Orthodox theologian John Meyendorff (d. 1992), "The Christian faith and experience can in no way be compatible with the notion of sola scriptura" and the rejection of all ecclesiastical authority except Scripture. This elevation of the Bible above the church, the consequence of which is private interpretation, George Florovsky (d. 1979) once called "the sin of the Reformation."

Positively, Orthodoxy believes that the Spirit of God speaks to his people through apostolic tradition. This tradition is expressed through Scripture, to be sure, but also through the seven ecumenical councils, and to a lesser degree, the church fathers, liturgy, canon law, and icons.

Furthermore, contrary to Calvin, the Orthodox note that the church existed some 300 years before the ecumenical councils and the formation of the scriptural canon. The Reformed idea of "Scripture alone" seems privatistic (allowing each person to interpret truth on his or her own) and therefore dangerous. By way of contrast, converts to Orthodoxy vow to "accept and understand Holy Scripture in accordance with the interpretation which was and is held by the Holy Orthodox Catholic Church of the East, our Mother."

The central issue raised by the Reformation was how a person could stand just before a holy God—How can I be saved? For traditional Protestants, the answer to this question is expressed in Paul's doctrine of "justification by faith alone." The perfect righteousness of Christ is credited to me by faith alone and not by any work I do. Because of Christ's righteousness, God declares me just. Calvin called this doctrine "the hinge upon which true religion turns." According to Luther, Christianity stands or falls with this doctrine.

It is fascinating to observe the total absence of the doctrine of justification by faith in large segments of Orthodox history and theology. Instead, the idea of theosis or "deification" takes center stage. The startling aphorism—attributed to many early church fathers, including the champion of trinitarianism, Athanasius—summed it up well: "God became man so that men might become gods."

In fact, theosis enjoys the support of Scripture, as in 2 Peter 1:4: "[God] has given us his very great and precious promises, so that through them you may participate in the divine nature . …" Put another way, the Son of God descended and became a man, that we humans might ascend and become like Christ. The legal framework for understanding the work of Christ is played down and our mystical union with God is emphasized.

But what does it mean to "become God"? First, Orthodoxy categorically repudiates any hint of pantheism; theosis does not mean the essence of our human nature is lost. Rather, theosis speaks to believers' real, genuine, and mystical union with God whereby we become more and more like Christ and move from corruption to immortality. As we avail ourselves of God's grace and live lives of spiritual vigilance, we hope for what Maximus the Confessor (580-662) described as the "glorious attainment of likeness to God, insofar as this is possible with man."

As Lossky observed, there is indeed a "dogmatic dissimilarity" between Christian thinkers in the East and West. I for one am thoroughly Protestant, but I am grateful to God for what I can learn from the Orthodox about our common pilgrimage of faith.

This is a summary by Daniel Clendenin of his book Eastern Orthodox Christianity: A Western Perspective, (Baker Academic, a division of Baker Publishing Group, 1994.) Used by permission.
All rights to this material are reserved. Materials are not to be published in other media without written permission from Baker Publishing Group. 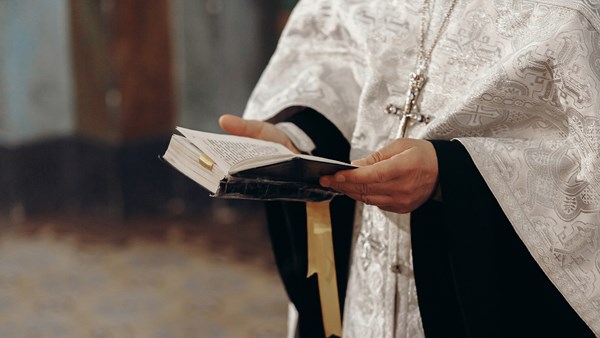