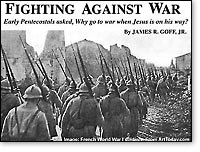 Early Pentecostals asked, Why go to war when Jesus is on his way?
James R. Goff

When World War I broke out, most adherents to the fledgling Pentecostal movement stood firmly on the side of pacifism. The movement's leaders, like Frank Bartleman and Charles Parham (who married a Quaker) had made it a key tenet years before, even though they believed war was inevitable.

The position drew strength from at least two quarters. First, Pentecostals took literally the biblical injunctions to "Love your enemies" and "Thou shalt not kill."

But Pentecostals also believed their movement heralded the end of the world as they knew it. As ardent premillennialists, they envisioned a final earth-shaking revival even as the world hastened down the final path of destruction that would lead to the coming Millennium.

From this perspective, the outbreak of war in 1914 offered tangible proof that the end was near and fighting against militant forces in Europe was useless. The only important battle was the warfare for souls.

Most Pentecostal denominations, therefore, took stands against the war and urged members to seek conscientious objector or noncombatant status. Some, like the Assemblies of God and the Pentecostal Holiness Church, declared their opposition to warfare but left the decision ultimately in the hands of their members.

The Church of God (Cleveland, Tenn.), though, passed a resolution specifically forbidding its members from participating in war. Its publication, the Church of God Evangel, actually faced a Justice Department investigation for possible violation of the Espionage and Sedition Acts.

In a similar vein, Charles H. Mason, head of the predominately black Church of God in Christ, was jailed in Mississippi for his vocal opposition to the war effort. Even more ardent ...