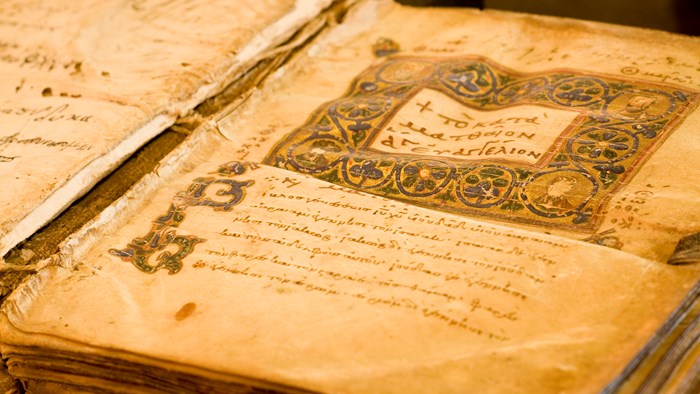 "The Church," wrote Irenaeus, "having received this preaching and this faith, although scattered throughout the whole world, yet, as if occupying but one house, carefully preserves it. She also believed these points [of doctrine] just as if she had but one soul, and one and the same heart, and she proclaims them, and teaches them, and hands them down, with perfect harmony, as if she possessed one mouth."

From the beginning, Christians have been urged to hold on to "the faith delivered once for all to the saints" (Jude 3). Yet also from the beginning, some people had begun to misunderstand or misinterpret that faith. After the eyewitnesses and apostles passed away, believers could no longer go for answers to those who had laid the foundations of the church. In every great city, different teachers and leaders claimed to represent true Christianity, each asserting that they maintained the true faith, each appealing to a body of apostolic writings.

To support their doctrines, some Gnostics were claiming a succession of teachers going back to an apostle. In the face of such authoritative-sounding claims, how could Christians know that what the Gnostics taught was wrong and what their own pastor taught was right? Whom could they trust?

Despite these contending claims, even the pagan doctor Galen (129-216?) recognized that there was such a thing as "the Great Church," which was clearly distinct from the multitude of sects. Irenaeus of Lyons was the first Christian leader to write a confident statement of the faith of "the Great Church" and explain why it could be trusted. He considered three things to be inextricably linked: Scripture (both the Old Testament and the apostolic writings), the tradition of the apostles' teaching (the Rule of Faith), and the leadership of the church.

Passing on the true faith

Today we tend to think of apostolic succession in terms of the laying on of hands: The church confers an office on a consecrated bishop, who can thereby trace his authority back to the apostles. Roman Catholic, Eastern Orthodox, and Anglican churches each claim their own unbroken line of ordained leaders. Most Protestants deny the importance of a continuous succession of bishops altogether.

But in the second century, apostolic succession meant something more simple. Two main concerns were at stake: What is the true faith? And how has it been passed on from the apostles to us?

This faith, according to Irenaeus, is found in the Scriptures and summarized in the Rule of Faith. The proof that this is the true faith is that the "Great Church" could point to a visible succession of teachers, presbyters, and bishops who taught the same things throughout the world: This is the teaching common to all the apostles and the churches founded by them. The leaders of many of these churches had been taught by the apostles themselves, or disciples of the apostles, and they "neither taught nor knew of anything like what these [heretics] rave about."

This was an important defense of orthodox Christianity against the Gnostic teachers. If the apostles were going to entrust the truth about Jesus to anyone, Irenaeus argued, they would have entrusted it to the same people to whom they entrusted the churches. They would not have charged some with caring for their flock and then secretly told hidden mysteries to others. In contrast to the Gnostics' secret succession, the Great Church had a succession of teaching that was universal and public—and therefore more trustworthy.

As an example, Irenaeus pointed to the Christian communities in Rome (at that time there were many house churches, each with its own leaders, not one church with a single bishop), and in particular the community led by Eleutherius. He listed 12 successive leaders, from the apostles down to Eleutherius, to show that the apostolic teaching had been passed on continuously. He especially noted Clement, one of the first leaders, who had known the apostles and recorded their teaching in a letter that was earlier than any of the Gnostics' texts. "By this succession," Irenaeus wrote, "the ecclesiastical tradition from the apostles, and the preaching of the truth, have come down to us. And this is the most abundant proof that there is one and the same vivifying faith, which has been preserved in the Church from the apostles until now, and handed down in truth."

In later centuries, some churches began trying to construct similar lists of succession to defend their own authenticity or authority, but this was not Irenaeus's main concern. He was not defending the authority of particular people; he was trying to defend the true faith against heresy by showing that the apostles' message about Jesus had been faithfully preserved in the churches, and therefore could be trusted. Succession for him did not primarily mean handing down an office; it was the public expression of the continuity of the true faith.

The Roman church had developed a unique importance in the ancient world; it had been founded by both Peter and Paul, had given generously to Christians in other places, and had preserved the true faith. But Irenaeus pointed out that apostolic succession could also be seen in other cities like Ephesus where the apostles had founded a church. His own teacher Polycarp in Smyrna had known the apostles and died "having always taught the things which he had learned from the apostles, and which the church has handed down, and which alone are true."

Those churches or leaders who could show apostolic succession were not above criticism. Irenaeus had no qualms about writing to bishop Victor, Eleutherius' successor in Rome, and telling him that he was wrong not to respect the Easter practices of Asia Minor Christians. Succession of leadership was not a guarantee of truth, but a powerful witness to the truth that is the common inheritance of all who belong to the Great Church, all who carry on the teachings of the apostles—wherever they may be.

The success of the Great Church—and the weakening of the Gnostics and other sects—did not depend, as some recent popular books have claimed, upon the patriarchal power of authoritarian bishops. At this point in time, bishops and other Christian teachers had no worldly power, no property, and no ability to call upon the political authorities for help. Their power lay in being able to offer Christians a coherent, persuasive picture of the truth handed down from the beginning.

D. H. Williams
Next Article
The Heresy that Wouldn't Die