This 18th century Irishman became one of the founders of the Disciples of Christ and the Church of Christ. 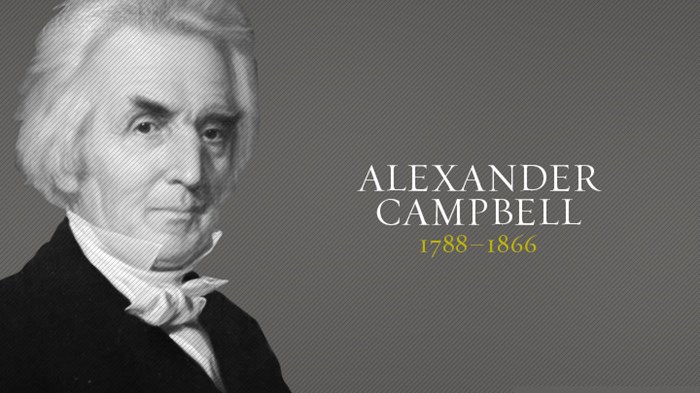 "The union of Christians with the apostles' testimony is all-sufficient and alone sufficient to the conversion of the world."

Separated by the Atlantic Ocean, Presbyterian preacher Thomas Campbell and his son Alexander simultaneously came to the same conclusion: the future was not with Presbyterianism.

Why these two Irish men concluded that, and what they did about it, created one of the most powerful movements in American religious history—and a uniquely American denomination.

The plan was for Thomas to sail to America first with his family to follow later. But the ship carrying Campbell's family was shipwrecked, and they had to spend a year in Scotland. There, 19-year-old Alexander answered the call to preach and began studying at the University of Glasgow. He quickly became disgusted with what he perceived to be theological pettiness in Presbyterianism. One Sunday he refused Communion, symbolically breaking with the faith of his father.

When Alexander finally arrived in Pennsylvania, though, he discovered his father had also seceded from the local presbytery! One reason: a perceived lack of scriptural support for infant baptism. Thomas had founded The Christian Association of Washington (County, Pennsylvania). "Where the Scriptures speak, we speak," declared Thomas, "where the Scriptures are silent, we are silent."

In 1811, Alexander began pastoring Bull Run Church, a group of Presbyterian refugees. The birth of his first child led him to reconsider his views on infant baptism. He decided that his own infant baptism was invalid, so he sought out a Baptist minister to immerse him as an adult believer. His church then joined the local Baptist association.

Alexander traveled on horseback through the Midwest and South, preaching a simple gospel stripped of "dogma" and "creeds." In 1823 he launched The Christian Baptist, a monthly that, wrote editor Campbell, "shall espouse the cause of no religious sect, excepting that ancient sect 'called Christians first at Antioch.'"

That purist spirit eventually drove a wedge between Campbell and the Baptists, but it created an affinity with Barton Stone and his followers, some 10,000 strong and known simply as "Christians." They too were championing a "restoration" of primitive Christianity. Stone's followers and Campbell's (some 12,000 known as "Disciples") merged in 1832 to form a loosely organized group of independent-minded churches committed to primitive Christianity—eventually called the Christian Church (Disciples of Christ).

Campbell's evangelistic methods were varied, to say the least. A life-long debater, Campbell once sparred with popular atheist Robert Owen, delivering an address on the evidences of Christianity that lasted 12 hours! Later Campbell visited Owen and pleaded with him to accept the Christian faith; Owen wouldn't budge, though Campbell's appeal allegedly moved him to tears.

Perhaps Campbell's most important work was launching and editing The Millennial Harbinger. The journal defined and fueled the Restoration movement's spectacular growth, from about 22,000 in 1830, when the journal was launched, to over 200,000 in the year of Campbell's death.

In 1840 Campbell chartered Bethany College in Bethany, Virginia, to provide more education for ministers. He published a translation of the New Testament (1827), and wrote several books, including The Christian System (1839) and Christian Baptism (1854).

In The Christian System, he elaborated on the principles that drove him all his ministry. He was deeply disturbed by denominationalism: "In what moral desolation is the kingdom of Jesus Christ! Was there at any time, or is there now, in all the earth, a kingdom more convulsed by internal broils and dissensions than what is commonly called the church of Jesus Christ?"

He sought desperately to get back to a "simple evangelical Christianity," founded on the Bible and the Bible alone. Only this—not creeds or confessions or liturgy—could bring unity to Christians: "The testimony of the Apostles is the only and all-sufficient means of uniting Christians." And only in unity could Christians effectively evangelize: "The union of Christians with the apostle's testimony is all-sufficient and alone sufficient to the conversion of the world."

Campbell's emphasis on New Testament Christianity appealed powerfully to frontier Americans—and to many Christians since.