"The hammer of heretics" 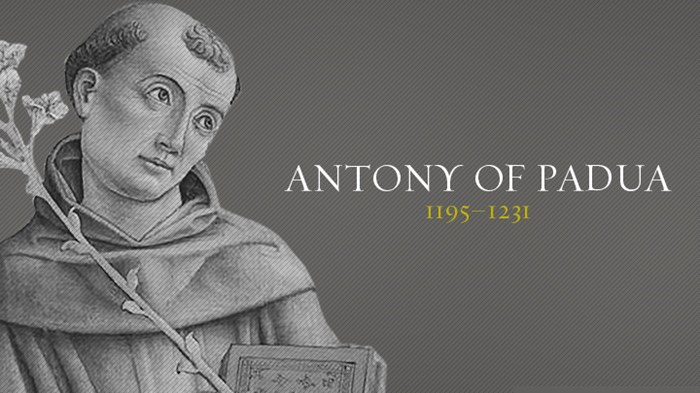 "It pleases me that you teach sacred theology to the brothers, as long as—in the words of the Rule—you 'do not extinguish the Spirit of prayer and devotion' with study of this kind."
—Francis of Assisi

Antony's mentor, Francis of Assisi, had a deep suspicion of scholarship, but he quickly recognized that his new disciple had a brilliant mind and that it would be a shame to waste such a talent.

"Brother Francis wishes health to Brother Antony, my bishop," he wrote. "It pleases me that you teach sacred theology to the brothers, as long as—in the words of the Rule—you 'do not extinguish the Spirit of prayer and devotion' with study of this kind."

With this blessing, Antony went on to a life of teaching and to preaching, becoming the most popular and effective preacher of his day.

Dying to be killed

Born in Lisbon, Portugal, and baptized Fernando, he joined an Augustinian monastery at age 15.

In about 1220, some relics arrived in town: the bodies of Franciscan friars martyred in Morocco, whom Antony had known by name. Antony was electrified by the prospect of dying for Christ himself, and he hurried to the Franciscan friary in town.

"If I may go to Morocco and imitate these brothers," he pleaded, "I will gladly join you."

He was released from his Augustinian order and took the name Antony when he joined the Franciscans. Within months, he was sailing for Morocco to join the martyrs in glorious death. However, he became deathly ill with malaria en route and was forced to return to Europe. On the trip home, a violent storm arose, and Antony's ship was blown all the way to Sicily, just in time to join another group of Franciscan friars heading to Assisi to hear Francis speak.

For the next year, Antony lived a simple life of quiet prayer and work at a Franciscan hermitage. He cleaned, gardened, set tables, washed dishes. In 1222 he attended an ordination service, where the scheduled preacher failed to show. Antony was ordered to speak, and though slow and unassured at first, by the end of his sermon, everyone in attendance was surprised at his power and brilliance. It wasn't long, with Francis's permission, before he was teaching other Franciscans.

Preacher to the poor

For the next few years, Antony held various administrative posts, but he was always on the road, preaching and teaching. He was phenomenally popular, sometimes attracting crowds of up to 30,000. When he approached a town he was about to preach in, the shops closed and the markets suspended business.

In his messages, he often attacked the rich for their oppression of the poor, and he lambasted the moneylenders for charging exorbitant interest. He also spoke pointedly to church leaders if he knew they were not defending the poor.

Antony's second favorite topic was heresy. So successful was he at converting heretics in Southern France and Northern Italy, hotbeds for the dualistic Cathari, he was called "The Hammer of the Heretics." He backed up his arguments with an astonishing knowledge of Scripture.

"He is truly the Ark of the Covenant and the treasury of Holy Scripture," said Pope Gregory, who added that if all the Bibles of the world were lost, Antony could surely rewrite them.

Part of Antony's draw has been attributed to miracle-working. Medieval legends abound: in one, he preaches to fish, who hold their heads above water to listen to him. In another, he preaches so eloquently, "that all who were assembled … although they spoke different languages, clearly and distinctly heard and understood every one of his words as if he had spoken in each of their languages."

In 1230 Antony settled in Padua. The city was soon so overwhelmed with the crowds that came to hear him that the citizens ran out of accommodation and food. Nevertheless, Antony's preaching reportedly had a tremendous effect: debtors were freed from prison, relationships were mended, and everyone vowed to live a better life.

The furious pace of Antony's life eventually took its toll, however. At only 36 years old, he died. Within six months of his death, Antony was canonized.