Theologian for the intelligentsia 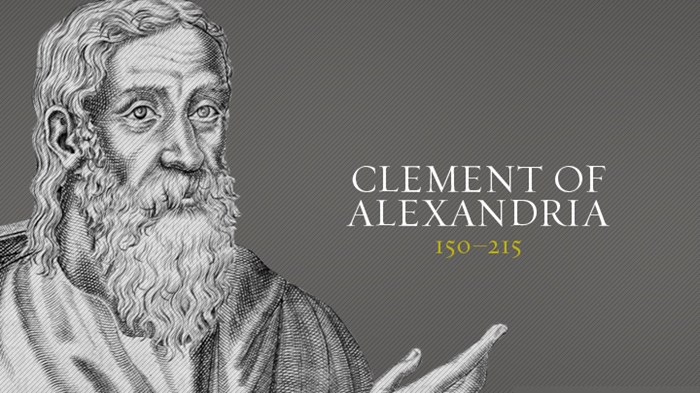 "Let us remove the ignorance and darkness that spreads like a mist over our sight, and let us get a vision of the true God."

New Age thought is really not all that new, nor is the twentieth century the first time Christians have been forced to respond to this strain of religious teaching. One early form of New Age type thinking was Gnosticism, which flourished in the second and third centuries, and one of the most effective Christian responders was Clement of Alexandria.

He was born Titus Flavius Clemens, most likely to pagan parents in Athens. As an adult, he sought out truth from a number of teachers in Greece, lower Italy, Syria, Palestine, and finally Alexandria, a city of perhaps one million inhabitants. There he sat under Pantaenus, who taught Christianity in light of the scientific teachings of the day.

In about 190, Clement opened his own "school," which was more like a cycle of conferences drawn out over years. He taught a "new philosophy" that addressed the cultural and philosophical concerns of the day. The "philosophy" was not all that new—Christianity—but Clement's teaching of it was. He wrote three books to expound his views.

His Exhortation to the Greeks was an introductory philosophical work for the unbaptized, in which he attempted to show the reasonableness of the Christian faith. "Away then, away with our forgetfulness of the truth!" he exhorted. "Let us remove the ignorance and darkness that spreads like a mist over our sight, and let us get a vision of the true God."

In Instructor, he outlined the specific duties and ethics taught by the "Instructor" (i.e., the Logos, or Christ): "Our superintendence in instruction and discipline is the office of the Word [Logos, in Greek], from whom we learn frugality and humility, and all that pertains to love of freedom, love of man, and love of excellence."

His Miscellanies is a multicolored patchwork of teachings in advanced philosophy, ethics, and disciplined instruction for "Christian Gnostics" to lead them into esoteric knowledge (gnosis): "The man of understanding and discernment is, then, a Gnostic. And his business is not abstinence from what is evil ... or the doing of good out of fear ... nor any more is he to do so from hope of promised recompense ... but only the doing of good out of love, and for the sake of its own excellence is the Gnostic's choice."

If this sounds mystical, it is. Clement sought to reach the literati of his day, and Gnosticism was the rage. He sought to present the Christian faith in terms these people could recognize.

The problem of wealth

Clement didn't spend all his time on pagans but also sought to help the church. One of history's most famous sermons is Clement's. In it he tried to address a recurring problem in church history, but one which Christians were facing for the first time in his day: in light of Jesus' parable of the rich young ruler, what should rich Christians do with their wealth? Clement took an approach that has been debated but usually followed ever since.

Clement puts the issue this way: "Since possessions of one kind are within the soul, and those of another kind outside it, and these latter appear to be good if the soul uses them well, but if they are badly used—which of the two is it that he [Jesus] asks us to renounce?"

He answers, "The Lord admits the use of outward things, bidding us put away, not the means of living, but the things that use these badly. And these are ... the infirmities and passions of the soul."

In other words, it's our attitude toward possessions (i.e., greed), not the possessions themselves, that are the problem.

Clement also advocated using the visual arts in worship at a time when some early Christians were reluctant to employ painting or drawing, fearing attention to their work might constitute idolatry. Clement concluded that Christians are not to depict pagan gods, nor sword or bow, nor wine cups, nor reminders of sexual immorality.

Instead, "Let our emblem be a dove, or a fish, or a ship running before the wind, or a musician's lyre, or a ship's anchor. And if there be a fisherman, he will remind us of an apostle, and little children being drawn up out of the water."

In addition, one of the earliest Christian hymns is that appended to Clement's Instructor, "Hymn of the Savior Christ." Its earliest rendering in English verse (in 1846) appears in many hymnals today as "Shepherd of Tender Youth." Three stanzas translated from the original Greek bring a vivid picture of the praise-life of the Alexandrian church:

Bridle-bit of untamed colts,
Wing of birds that do not go astray,
Sure Tiller of ships,
Shepherd of the King's lambs!
Gather your children
Who live in simplicity.
Let them sing in holiness.
Let them celebrate with sincerity,
With a mouth that knows no evil,
The Christ who guides his children!

His ministry, both in and outside the Alexandrian church, was cut abruptly short in 202, when persecution broke out during the reign of Emperor Septimius Severus. Clement was compelled to flee the city. He settled in Cappadocia, and by 215 had died.

But his influence did not end when his life did. He was, according to tradition, the teacher of Origen, a theologian of immense influence in the next generation. His mystical theology may have also influenced Psuedo-Dionysius, who was the theologian who shaped medieval mysticism. And in the 1700s, John Wesley drew on Clement's depiction of the true Gnostic for help in describing Christian perfection.