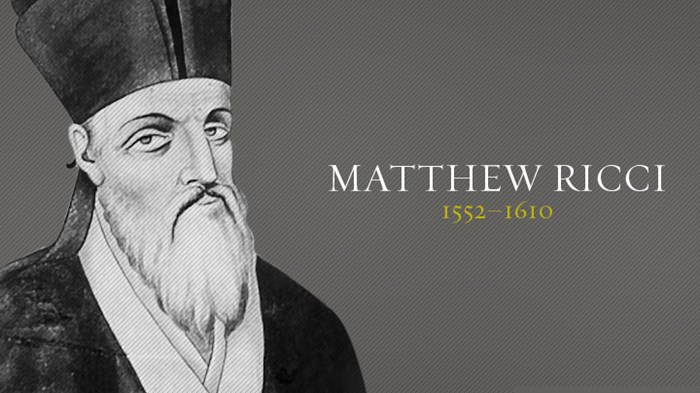 "Those that adore Heaven instead of the Lord of Heaven are like a man who, desiring to pay the emperor homage, prostrates himself before the imperial palace at Peking and venerates its beauty."

In 1579, a man named Valignano arrived at Macao, a Portuguese trading post on the coast of China. Looking toward the nearby mainland, the aspiring missionary was said to have cried out, "Rock, rock, oh when wilt thou open, rock?" Priests in Macao had told him not to hold his breath: the conversion of the Chinese, they argued, was completely impossible.

Within four years, though, a 30-year-old Italian Jesuit was living in the provincial capital and introducing Chinese to the Christian faith. His name was Matthew Ricci, and he was destined to become, along with Francis Xavier, one of the most successful missionaries to the Far East.

Moving to the Chinese capital

Ricci's father was an Italian aristocrat who sent his son to Rome to study law. Ricci instead joined the Society of Jesus (the Jesuits), under whom he studied mathematics to prepare him for missionary work. He was sent, along with 13 others, to Goa in India, where he taught children who were to become the next generation's Christian leaders.

Ricci had bargained for more when he signed up with the Jesuits, and after four years, he asked for a transfer. He was reassigned to Macao.

When Chinese officials heard that Ricci had expertise in mathematics, astronomy, and geography, they invited him and his companion Ruggieri to settle in the provincial capital of Chaoch'ing in 1583. Little by little, Ricci moved closer to the imperial capital, Peking, and in 1600, he was invited by the emperor to dwell there.

The Chinese considered theirs the only true civilization, and Ricci accommodated them when he addressed them: "Li Ma-ton, your Majesty's servant, comes from the Far West, addresses himself to your majesty with respect … Despite the distance [of my homeland], fame told me of the remarkable teaching and fine institutions with which the imperial court has endowed all its peoples."

He told the emperor that he only wanted to be "of some small use," and at first, that meant repairing clocks, two of which he'd given the emperor upon his arrival. Ricci's skill at this and mapmaking so impressed the emperor, more doors were opened for him, so that he was able to remain in the capital, with government protection, for ten years.

"It is a miracle of the omnipotent hand of the Most High," wrote Ricci, "The miracle appears all the greater in that not only do we dwell in Peking, but we enjoy here an incontestable authority."

To translate Christianity into the Chinese idiom, Ricci had to innovate. For example, the Chinese did not have a word for "God," so Ricci at first used T'ien Chu, "Lord of Heaven." In one of his earliest catechisms, he wrote, "Those that adore Heaven instead of the Lord of Heaven are like a man who, desiring to pay the emperor homage, prostrates himself before the imperial palace at Peking and venerates its beauty."

Later he decided that T'ien ("heaven") alone already had theistic overtones to the Chinese. He also believed that terms like Sheng, often translated "holy," were used in a wide sense to describe anything held as venerable. Thus Ricci used it when referring to Confucius.

Furthermore, to give himself a hearing among the Chinese intelligentsia, most of whom were devotees of Confucianism, Ricci decided he needed to become a Confucian scholar.

And in order to honor local traditions, he permitted his converts to continue many ancient customs, like ancestor "worship." In China, society was founded on the cohesion of the family, and paying reverence to ancestors (burning incense to them) was a traditional rite that reinforced this family value. Ricci, after prolonged study, decided the practice was not worship, as some Christians charged, but merely an act of respect for those family members who had gone before.

Ricci's methods came under fire almost immediately, especially from competing orders, the Dominicans and Franciscans, who were jealous of Jesuit success. The affair become known as the Chinese Rites Controversy. Rome tended to take the side of the friars and tried to curtail Ricci's work. Peking, on the other hand, sided with the Jesuits, and the controversy raged for centuries without being resolved.

Ricci maintained his mission until he died. Though the number of his converts was relatively small, it included many influential Chinese scholars and families who played key roles in the future of Christianity in China.