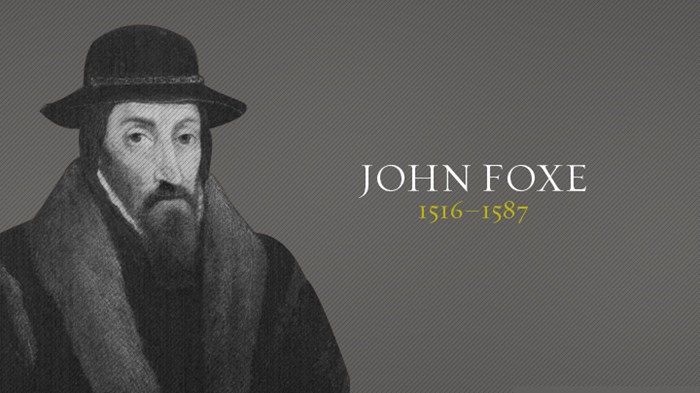 "What storms and tempests it [the church] hath overpast, wondrous it is to behold."

The works of church historians rarely influence history itself, but John Foxe's Acts and Monuments of Matters Happening to the Church—commonly known as Foxe's Book of Martyrs—is the exception that proves the rule.

"It is hard to overemphasize the impact his Acts and Monuments had the 20 years following its 1563 publication," writes historian David Loades. "By the second edition (1570), it was part of the national myth … Foxe provided both a history and theology for the triumph of the Reformation."

Foxe's life itself was shaped by trials. He lost his father as a youth, and his relationship with his stepfather remained cool. At Oxford his brilliance and "indefatigable zeal and industry" earned him a master's degree and a fellowship, but when he cast his lot with emerging Protestantism, he lost his fellowship, his family disowned him, and, turning to tutoring, he found it difficult to find steady work.

Finally, the family of the executed Earl of Surrey hired him to educate the earl's newly orphaned children, and because of the political climate, hid him in the house. During the reign of Edward VI (1547–1553), he was able to live openly, and he began work on a history of the persecution of Reformers.

When Catholic Mary ascended the throne, Foxe fled to the Continent. There he met John Knox and other Protestant refugees, supporting himself as a printer. In 1554 Foxe published his research in a Latin martyrology of 212 pages. Mary's persecution of English Protestants, many of whom were Foxe's friends, forced him to begin a revision immediately.

With Protestant sympathizer Elizabeth's accession to the throne, Foxe returned to England and to the service of one of his former pupils, now the Duke of Norfolk. He worked with printer John Day to produce in 1563 an English version of his masterwork, now about 1,800 pages. It was a striking volume with extensive documentation, stirring narrative, and horrifying woodcut illustrations, including accounts of many of the 300 martyrs of Mary's reign. Foxe wanted to demonstrate to readers how the church, despite all manner of trial and persecution, "hath yet endured and holden its own! What storms and tempests it hath overpast, wondrous it is to behold."

Factual errors and a polemic style, however, made it controversial, especially regarding his treatment of the previous English queen: "We earnestly pray that the annals of no country, Catholic or pagan," Foxe wrote, "may ever be stained with such a repetition of human sacrifices to papal power, and that the detestation in which the character of Mary is holden may be a beacon to succeeding monarchs to avoid the rocks of fanaticism!" Foxe's writings were one reason the Catholic queen became known as "Bloody" Mary.

Since the book contained dramatic accounts of so many Protestant martyrs, it worked as a powerful support for Elizabeth's Protestant establishment. The 1570 edition (revised and enlarged to some 2,500 pages, covering the history of persecution from the early church on) was ordered displayed in every church, common hall, and college.

Historian Douglass Campbell commented, "When one recollects that until the appearance of Pilgrim's Progress the common people had almost no other reading matter except the Bible and Foxe's Book of Martyrs, we can understand the deep impression that this book produced. Those who could read for themselves learned the full details of all the atrocities performed on the Protestant reformers; the illiterate could see the rude illustrations of the various instruments of torture, the rack, the gridiron, the boiling oil, and then the holy ones breathing out their souls amid the flames."

After his patron died, Foxe's finances became precarious. Though twice offered livings in Anglican churches, he refused because of his Puritan leanings. He wore himself away with hard work to the point that friends did not recognize him on the street. But before he died, he had produced two more editions of his mammoth work and more than 30 other published pieces, and he had conducted a full schedule of preaching and good works.

John FoxeMartyrdomReformationWriting
131 Christians Everyone Should Know