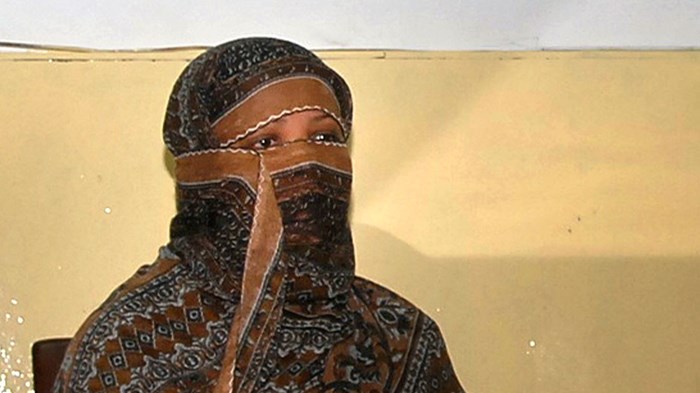 Asia Bibi’s death sentence was upheld by the Lahore High Court in Pakistan on Thursday. Bibi, a Roman Catholic mother of five also known as Aasiya Noreen, was sentenced to die in 2010 after she was convicted of blasphemy. Bibi’s Muslim coworkers accused her of drinking the same water as them and verbally challenging their faith.

“I met Asia in prison a month ago. She’s fine and was hoping to hear good news, but, alas, our ordeal is not over yet,” Bibi’s husband, Ashiq Masih, told Morning Star News after yesterday’s decision.

World Watch Monitor reports that Bibi’s attorney Naeem Shakir challenged the testimony of the women who feuded with Bibi, arguing to the appellate court that their testimony had been hearsay because the complainant in the case had not heards Bibi’s words himself. The judges ignored Sharkir’s critiques, suggesting he should have raised them the trial level.

S. K. Chaudhry, the attorney who represented Bibi at her trial, explained that he had not cross-examined the only two eyewitnesses to the alleged blasphemous words. He told the judges it would violate his Muslim faith to repeat the words. “In the process of administration of justice we need to be ‘secular,’" one judge responded.

“Pakistan being a Muslim majority nation, where Christians and those of other religions are a tiny miniscule minorities, it is all the more incumbent on them (the government) to be vary (sic) of such accusations of blasphemy,” wrote Thomas Dabre, the Roman Catholic Bishop of Pune, an Indian diocese. “The Pakistan government there should be very careful in applying such laws and the International community should hold the government of Pakistan accountable. The Pakistan government cannot disown responsibility of this death sentence and should overturn immediately the death sentence of innocent Christian woman Asia Bibi.”

A staff editorial for Pakistan’s The Nation also criticized the law, but stopped short of calling on the government to repeal it:

The flaws in the blasphemy law, the repercussions they have against anyone who has been accused of blasphemy and the amount of cases that have little or no evidence proving that blasphemy was committed, mean that a revision of the laws is due. The law is based on the principal (sic) of innocent until proven guilty, yet in the case of blasphemy charges, the guilt of those that have been charged is accepted as fact, long before the case even goes to court, with the public often stepping in to execute their own brand of vigilante justice.

“This vile attack on a Christian wife and mother cannot stand. Like the case of [Sudanese woman Meriam Ibrahim], who is now a free woman because the world spoke out with one voice, it’s time for the international community to condemn Pakistan’s barbaric violation of Asia Bibi’s human rights,” wrote Jordan Sekulow of the American Center for Law and Justice. “She’s done nothing wrong, and these trumped up charges are merely because she is a Christian.”

David Griffiths of Amnesty International also condemned the attacks against Bibi, the first Pakistani woman to be sentenced to death for blasphemy. “Her mental and physical health has reportedly deteriorated badly during the years she has spent in almost total isolation on death row,” Griffiths added.

Morning Star News notes: “Death sentences have rarely been carried out in blasphemy cases, but that is in part because such allegations have frequently led to deadly vigilante attacks on the accused or their lawyers.”

Bibi’s lawyer Naeem Shakir told MSN that they plan to appeal the decision to Pakistan’s Supreme Court, though because of backlogs, the case will not likely be seen before 2017. After receiving her death sentence, Bibi’s case attracted international attention, including that of Pope Benedict, who personally called for her freedom. In her own country, two Pakistani politicians were assassinated in 2011 after speaking out against anti-blasphemy laws.

In 2013, French journalist Anne Isabelle Tollet and author of Blasphemy: A Memoir: Sentenced to Death over a Cup of Water told CT that she had little hope that Pakistan would repeal its blasphemy law.

“With the new group (Sharif's administration) it is impossible. I don't have any hope,” she said. “The blasphemy law fits the definition of terrorism. It's a terror law. It's a way to instill terror. Everybody is scared of this law.”

Earlier this year, Open Doors moved Pakistan up to number eight (from 14), on a list ranking the worst countries in the world for Christians. In 2013, more than 80 Christians lost their lives after bombs went off following a church service at All Saints Church in Peshawar. Previous high-profile attacks against Christians came that same year at Lahore's Joseph Colony and Gojra in 2009. Last year, four Christians were acquitted of blasphemy charges.