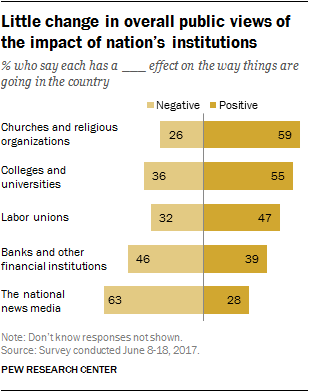 While Americans’ confidence in various institutions dips, the church remains in relatively high regard—especially among Christians and Republicans.

According to Pew Research Center, Americans view the impact of religious institutions more positively than colleges, labor unions, banks, or the media, and their reputation has changed little during the political shifts over the past few years.

Amid growing skepticism over the benefits of college among Republicans and a widening political divide over the media, a majority of the country—59 percent—continue to see the church as having a positive impact, while 26 percent see it having a negative impact.

The church’s positivity ratings are more than twice as high as the lowest-rated institution, the media, which 28 percent of Americans view positively and 63 percent negatively.

Last year, Gallup found the church ranked among the most-trusted institutions in the country (beat only by military and police), even though it dropped to a record-low 41 percent confidence rating. The decline corresponds with a broader sense of skepticism, Gallup noted:

Americans clearly lack confidence in the institutions that affect their daily lives: the schools responsible for educating the nation's children; the houses of worship that are expected to provide spiritual guidance; the banks that are supposed to protect Americans' earnings; the US Congress elected to represent the nation's interests; and the news media that claims it exists to keep them informed.Each institution has its own specific probable causes for this situation. But the loss of faith ...

American Churches Have a Better Reputation Than ...