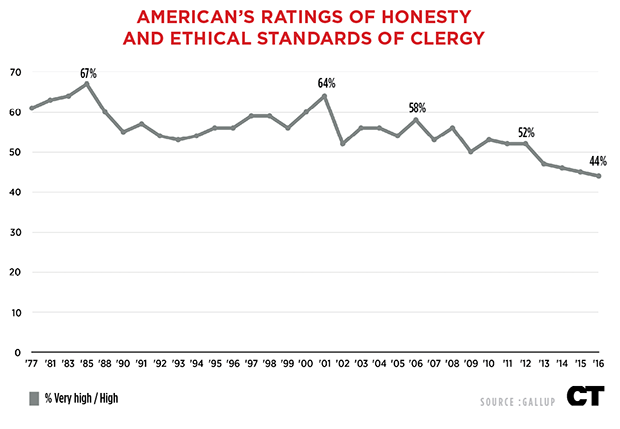 Despite the shrinking trust around clergy in particular, the church overall has maintained its reputation, according to 2017 findings from the Pew Research Center. As CT previously reported, “Americans view the impact of religious institutions more positively than colleges, labor unions, banks, or the media, and their reputation has changed little during the political shifts over the past few years.”

Nurses have topped the ethical professions list almost every year since they began appearing in the survey in 1999. (The one exception: After the September 11 attacks, firefighters won as most trustworthy and ethical.)

At the other end of the list, lobbyists are consistently ranked lowest by Christians, non-Christians, and members of every political party.

Republicans trust clergy even more than Christians do—59 percent rated their honesty and ethical standards highly. Fewer Democrats (41%) and Independents (35%) felt the same.

Car sales people, members of Congress, advertisers, and lobbyists are at the bottom of the list for Republicans, Democrats, and Independents.

Along with noting drops in pastor trustworthiness in 2012 and 2013, Gallup also found that dynamic pastors are less of a draw for churchgoers than the sermon message itself.