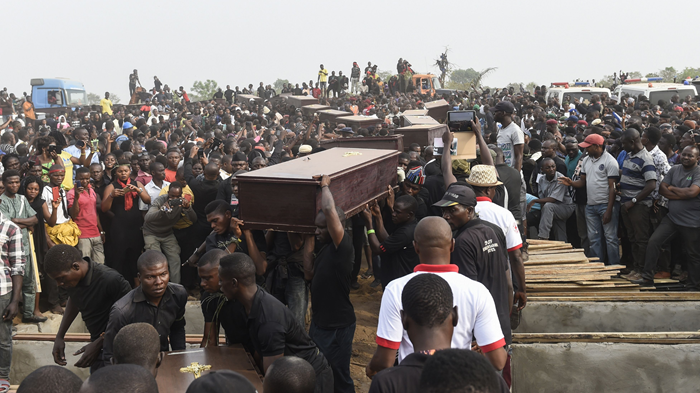 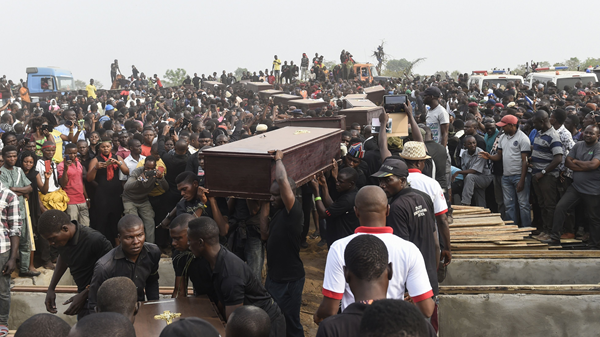 [Editor’s note: CT visited the attacked Benue church months later and interviewed survivors for an in-depth examination of the crisis.]

An attack on morning Mass at a Catholic church in central Nigeria yesterday left 2 priests and at least 17 parishioners dead, adding to the hundreds killed by herders in the region so far this year.

Police suspect Fulani herdsmen were responsible for the shooting rampage at Saint Ignatius Catholic Church in Mbalom, where about 30 attackers also ransacked a burial ceremony and burnt dozens of homes in the community, according to reports.

A local source contacted by the Nigerian Vanguard newspaper described a scene of horror:

“The services had barely started and worshippers were still coming for the Mass, after which a burial ceremony would take place, when sounds of rapid gunshots rent the air.

“People started scampering and wailing: 19 persons, including Reverend Fathers Joseph Gor and Felix Tyolaha, who were holding the morning Mass, were gunned down in cold blood, while many sustained injuries, including bullet wounds.

“After attacking the church, the invaders descended on the community and razed over 60 houses, farmland, food barns, after carting away what the people had in their barns.

“As usual, after killing the helpless worshippers and razing the community, the attackers fled from the scene.”

Terver Akase, a police spokesman, said officials expect arrests to be made because the herdsmen “are becoming more brazen.”

The village is located in Nigeria’s Benue state, in the tense “Middle Belt” between the nation’s predominantly Muslim north and predominantly Christian south.

In areas like Benue, most of the settled farmers living there are Christian. The Fulani herdsmen, mostly Muslim, are semi-nomadic and fighting for land and resources.

While Boko Haram militants have waged attacks on Christians and others in Nigeria for years, intensifying to become the deadliest terror group in the world, the clashes with the Fulani have become “more deadly than the Boko Haram jihadist insurgency that has ravaged Nigeria’s northeast and is becoming a key issue in the upcoming 2019 presidential polls,” The Guardian reported.

“Violating a place of worship, killing priests and worshippers is not only vile, evil, and satanic,” said Muhammadu Buhari, Nigeria’s current president and a Muslim (the nation alternates between Muslim and Christian heads of state), “it is clearly calculated to stoke up religious conflict and plunge our communities into endless bloodletting.”

On Wednesday, Nigeria’s House of Representatives summoned Buhari over the killings. The assembly also passed a vote of no confidence in the country’s service chiefs for the armed forces and all the security advisers to the president. The lawmakers in the lower legislative chambers will suspend sitting for three days in solidarity with Nigerians over the killing

Nigerians are calling on Buhari to address the violence in the region. If it continues, Christians could be forced to leave in a “religious cleansing” that is part of a drive for “the Islamic war of expansion.”

The head of the Methodist Church in Nigeria responded to the attacks by challenging Buhari to prioritize education, as his predecessor had.

“It still beats my imagination how the All Progressives Congress, APC, government of President Muhammadu Buhari is not consolidating on the legacies of Goodluck Jonathan who started the process of educating the herdsmen, by establishing schools for them,” said Livinus Biereonwu Onugha. “At this digital age, the APC government is encouraging herdsmen to continue to wander from place to place in rearing flocks.”

Attacks attributed to Fulani herdsmen have become recurrent in Benue in recent months. Since the introduction in November 2017 of a controversial law banning open grazing by herders in the state, attacks have been carried out on an almost daily basis.

In January, 80 people were killed and 80,000 forced to flee in a spate of violence in the state. The funerals on 11 January for 73 victims in Makurdi, Benue’s capital, were broadcast live. Among those killed were seven members of the Benue State Livestock Guards – a special paramilitary unit set up by the state governor to ensure the full implementation of the grazing law.

One of the deadliest attacks to have taken place in Nigeria in recent years took place in Benue in February, when over 500 villagers were massacred and over 7,000 displaced from 10 villages. In Taraba, which neighbors Benue state, 38 members of a United Methodist Church were killed during a village-wide siege that same month.

A recent report on Nigeria released by Open Doors concluded that the government has historically failed to protect Christians, particularly women and children, from Fulani violence. Researchers found that more than 700 Christians had been killed in an 18-month period ending last October.

A previous Open Doors report concluded that attacks on Christian communities by Fulani herdsmen was “evidence of ethnic cleansing.”

Large-scale violence in the region dates back to 1987, when an attack by Muslims on Christian students over an alleged misinterpretation of the Qur‘an led to the death of hundreds. Other triggers for deadly conflict, according to the report, have been the 2000 shari‘ah crisis following the introduction of Islamic law to northern Nigeria; the 2011 presidential elections; and land disputes with Fulani herdsmen emerging in 2016.

The government “has failed to address the situation justly and provide security for Christian majority communities,” according to the report, which accuses them of deploying soldiers—as “a first option rather than the last resort”—instead of attempting “genuine civil engagement” between the two sides. The report says that, over time, Muslims and Christians have settled into communities determined by religious affiliation, which distrust each other, with each community placing “sectarian division over and above the common interest.”

Open Doors researchers compared the reports of the many government-commissioned inquiries set up to help bring the conflict to an end. Recommendations for heightened military presence were compromised by corruption, such as awarding lucrative security contracts to associates, or real fears that security personnel had become part of the conflict, according to the report.

“The resurgence of violent conflict in southern Kaduna (a state in northwest Nigeria) towards the end of 2016 has drawn attention to the urgent need to understand the root causes and to give voice in particular to the affected Christian communities,” according to the report, which identified a lack of research into the conflict between the two sides and has attempted to address the gap by conducting a series of in-depth interviews from a “grass-roots perspective.”

The report details the number of Christians and Muslims killed, injured, and displaced in conflicts between May 2016 and October 2017, as well as the nature of attacks. It gives significant background to other conflicts, dating back to the 1980s. For security reasons, researchers were not able to collect data from some areas on the number of injured Muslims or the number of Muslim properties lost in the conflict.

Within the research period, 709 Christians and 16 Muslims were killed, 130 Christians were injured, and 3,459 Christians and 219 Muslims lost their properties. Many of the attacks by the herdsmen on Christians happened at night. (Poor infrastructure in the remote villages has led to Christians being vulnerable when it is dark.) Men, women, and children were killed. Kidnapping is common, and women who were taken but later returned to their communities reported that sexual assault was widespread.

The report notes that while analysts blame the conflict on politics, and competition over land (because of the problems of environmental degradation), they avoid talking about “the Islamic war of expansion” played out in southern Kaduna.

The herdsmen are well armed compared to Christians, defending themselves with “sticks and stones,” researchers said. To date, no Hausa-Fulani Muslim herdsmen have ever been arrested.

Also, the government has not provided aid to displaced southern Kaduna Christians living in camps, according to the report. Instead they rely on NGOs and churches.

The report says the government is failing to listen to Christians when it comes to forming policies. If this continues, Open Doors fears that Christians will just leave the area—an example of “religious cleansing.”