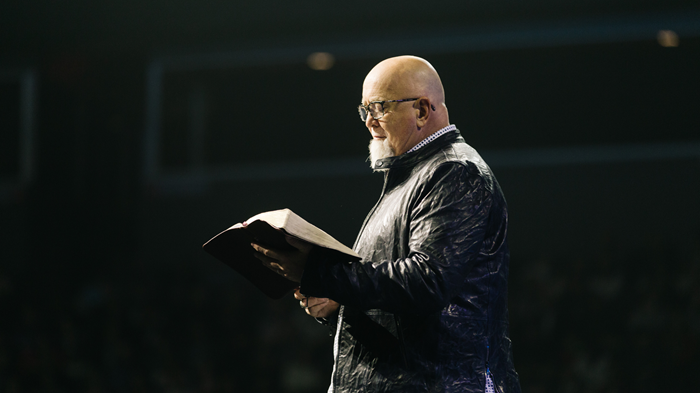 Harvest Bible Chapel and founding pastor James MacDonald have announced that they plan to drop their lawsuit against The Elephant’s Debt bloggers and Julie Roys after a court today denied the church’s attempt to keep subpoenaed documents private.

“Surely the Lord could have caused the court to rule in our favor, as ‘the lot is cast into the lap, but its every decision is from the Lord’ (Proverbs 16:33), and ‘the king’s heart is in the hand of the Lord, like the rivers of water; He turns it wherever He wishes’ (Proverbs 21:9),” the executive committee of elders announced on Harvest’s website. “We receive these outcomes as God’s direction and have instructed our legal counsel to drop the suit entirely.”

In a statement to CT, Roys said Harvest’s decision “appears to be motivated by a desire to suppress the truth, rather than a desire to reconcile with the other defendants and me.”

She called on the church to “apologize publicly for filing this frivolous lawsuit, reimburse all the defendants for our legal fees, and everyone who had a hand in this unbiblical lawsuit needs to resign.”

The Elephant’s Debt, a blog which has criticized Harvest’s leadership and finances over the past seven years, responded with a clip of an elephant dancing and a tweet declaring, “And that my friend is closure.” The bloggers also suggested that, if the suit is dismissed, they may also request attorneys’ fees and sanctions.

Roys’s lawyer, Charles Philbrick of Rathje Woodward LLC, told CT he had not heard of Harvest’s decision at the time of the church’s posting on Monday evening. (He said it’s possible that their attorney had not yet filed the dismissal or that the court’s system had not alerted him to the filing.)

Last October, Harvest and MacDonald sued Ryan Mahoney and Scott Bryant (along with their wives)—who run The Elephant’s Debt—and Roys—who was reporting on stories of mismanagement at the Chicagoland megachurch—for defamation.

“We would gladly accept no financial settlement, no resolution of damage done or redaction of existing slander,” wrote elders in a late December update. “All we ask is that they agree to stop attacking our church permanently and entrust the ongoing reforms to the Elders of our church.”

Mahoney and Bryant crowdfunded over $14,000 to fight the suit, and Roys continued her investigation as her lawyer defended against a temporary restraining order requested by Harvest. In her statement today to CT, she referred to the lawsuit as “apparently … an attempt to bully me into silence.”

After her story, “Hard times at Harvest,” ran in World magazine last month, she continued to release church documents as evidence of the tensions among its leadership, including a critical 2013 letter from former church elders and text messages from a current elder decrying “deceitfulness and manipulation” by MacDonald and top leaders.

The latter evidence was obtained through a subpoena during the discovery phase of the legal dispute with Harvest. The church asked the court to seal these documents and halt further subpoenas, but both their Emergency Motion for a Protective Order and Motion to Stay Discovery were denied today by the circuit court in Cook County, Illinois.

The Elephant’s Debt described the “victory” in a blog post, saying that as a result, “the defendants in this case are free to continue to send subpoenas to relevant parties; and they are free to publish legally appropriate materials.”

Mahoney and Bryant initially opposed the litigation, but said they were confident that “the legal process will ultimately uphold the values of the first amendment [sic] right to freedom of religion, freedom of speech and freedom of the press, all of which are essential to safeguarding the values of the Protestant Reformation and our common life.”

Roys told CT today that MacDonald refused to produce the documents she requested and suppressed evidence she obtained from third parties.

Harvest said in its statement that the potential for further subpoenaed information to be made public was a pivotal reason for dropping the case. “In good conscience we cannot knowingly subject innocent people, in many instances against their will, to a full subpoena process,” elders stated.

“With this decision, we can again focus our energies on continued growth in personal and organizational faults we have owned, enduring what is false, and striving to mitigate the damage such attacks bring to our church family and friends,” elders stated. “We remain willing to meet with the defendants for a face-to-face resolution of grievances, and we covet your prayers.”

Last year, MacDonald had written a defense explaining “Why Suing Is Sometimes the Biblical Choice” in an op-ed for CT.

Monday’s announcement comes just days after he told his church that he’d be pulling his long-running Walk in the Word program from radio and television channels this year and instead relying on digital distribution, since a majority of listeners (70%) already access it that way.

Moody Radio, which has aired the program for 19 years, released a statement over the weekend saying it is “developing plans for a replacement program” and urging listeners to pray for the station and for Harvest amid the transition.

Roys—who hosted a Moody Radio program up until she was fired a year ago—cited one station manager who had already decided to take the program off the air. She quoted MacDonald referencing the recent controversy in his announcement to staff: “When our church goes through difficult times like of late, that becomes even more of a strain and a burden to carry in a way that none of you would ever even know what goes on behind the scenes.”

The church’s official FAQs also reference “a small number of former Harvest leaders attacking our Pastor and our church online,” going on to describe the Walk in the Word transition as part of bigger efforts to streamline church operations, including paying off debt and shifting MacDonald’s role.

“By facing all these challenges at once, we envision a season of unparalleled peace and blessing as we head toward 2020 and beyond,” they wrote.

According to Roys’s World investigation, the megachurch had moved money between Walk in the Word, Harvest Bible Fellowship (which shuttered in 2017), and Harvest Bible Chapel operations. She reported that former fellowship church planters cited concern of misappropriation of funds as reason for the split. Harvest elders had stated that all fellowship funds were used for church planting.

Leaders at Harvest have repeatedly referred to concerns raised by The Elephant’s Debt and Roys as inaccurate, outdated, or both. In today’s announcement regarding the lawsuit, they describe “those attempting to interfere in the life of our church by publicizing false and distorted information about our church, primarily related to the years 2007-2012.”

Roys’s article also featured former elders and employees, some who had left as recently as early last year, about the frustrating terms of their departure, noting some “declined to speak on the record, citing nondisclosure and nondisparagement agreements they said Harvest pressured them to sign when they left.”