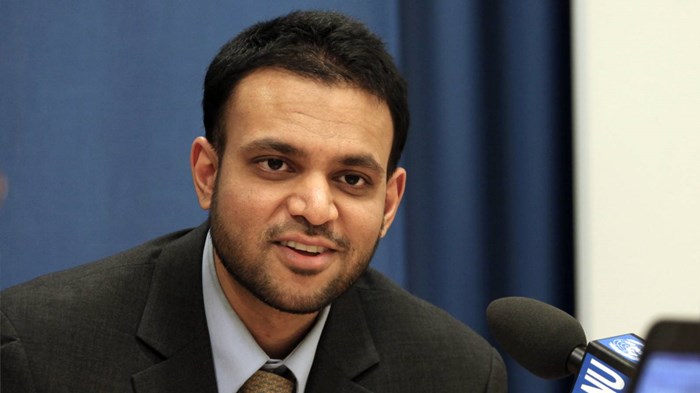 Rashad Hussain has become America’s new ambassador-at-large for international religious freedom, after the US Senate voted 85–5 last night in favor of his historic nomination as the first Muslim to hold the position.

Previous IRF ambassador Sam Brownback praised the decision and its bipartisan majority. “Religious persecution is rampant around the world, and the international community looks to the United States for leadership that can make a difference,” he stated.

Knox Thames, a senior fellow for the Institute for Global Engagement who served as the US State Department’s special advisor for religious minorities during both the Obama and Trump administrations, also praised the “overwhelmingly bipartisan vote.”

“It’s good for the issue that partisan politics stayed out of international human rights advocacy,” he told CT. “And it’s good for the persecuted that the Senate confirmed American’s top diplomat promoting religious freedom before Christmas.”

The US Commission on International Religous Freedom (USCIRF) thanked Congress for prioritizing the appointment of Brownback’s successor. “The right to freedom of religion or belief is under sustained threat globally,” stated USCIRF chair Nadine Maenza. “With his years of knowledge and experience, Ambassador Hussain is well placed to advance the US government’s promotion of international religious freedom.” 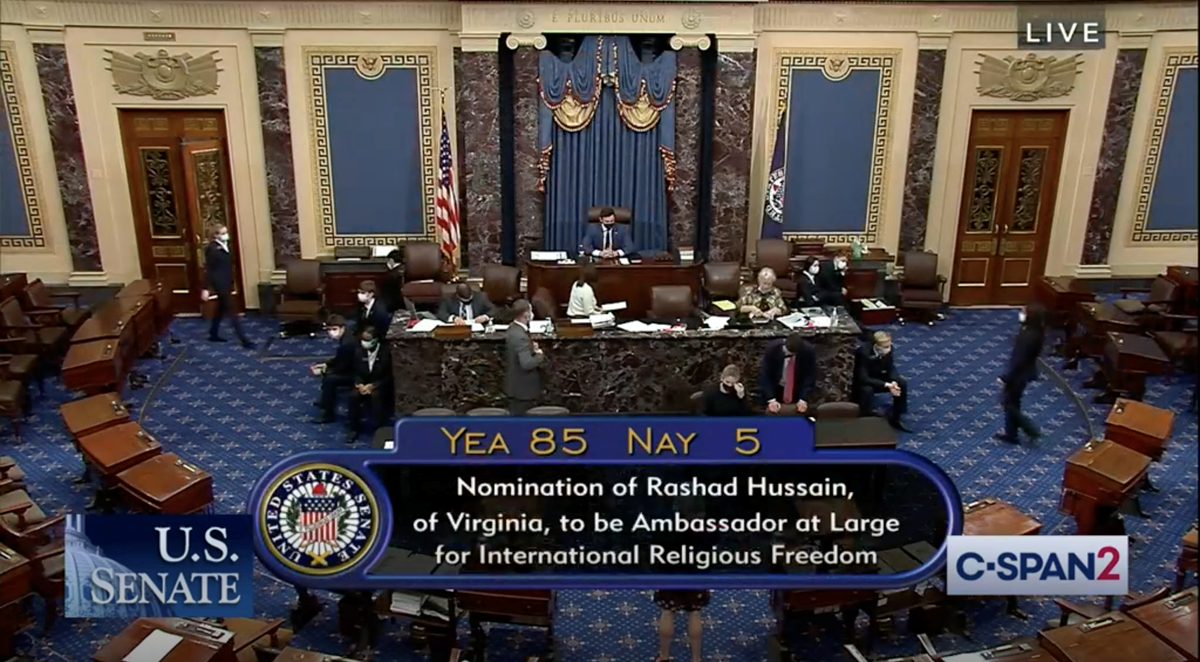 US Senate confirms Rashad Hussain as Ambassador at Large for Religious Freedom on December 17, 2021.

“We are praying for his success and we are eager to work with him,” said Brent Leatherwood, acting president of the Southern Baptist Ethics and Religious Liberty Commission (ERLC). “Religious freedom is under assault around the globe and his position is vital to confronting those who would undermine this fundamental right.”

Open Doors president and CEO David Curry said Hussain is “well-qualified” for the role. “His leadership will play a critical role in countering the global rise of religious persecution,” he stated. “We look forward to partnering together to speak up for people of faith everywhere.”

Open Doors, which Brownback joined as a senior fellow this year, urged for Hussain’s priorities to include “the extreme violence against Christians in Nigeria, the genocide against Uyghur Muslims in China, and the deterioration of religious freedoms in India, among others.”

USCIRF vice chair Nury Turkel urged the US government to support Hussain by “ensur[ing] that other key vacancies are swiftly filled, including the Special Envoy to Monitor and Combat Anti-Semitism, the Special Adviser for IRF on the National Security Council (NSC) staff, and Special Coordinator for Tibetan issues.”

A Senate Foreign Relations Committee hearing on Tuesday considered the nomination of Rashad Hussain to be President Joe Biden’s ambassador-at-large for international religious freedom. Hussain’s confirmation would make him the first Muslim to hold the position.

Hussain held a number of roles in the Obama administration, serving on the National Security Council, as an associate White House counsel, and as special envoy for strategic counterterrorism communications and special envoy to the Organization of Islamic Cooperation (OIC). The OIC is an intergovernmental organization representing 57 member states, most of them with a Muslim majority.

The 42-year-old lawyer was one of five nominees who took part in the virtual confirmation hearing on Tuesday.

“(A)s a Muslim American, I have seen the impact of bigotry and guilt by association tactics used against minority communities, including the message it sends and dangers it poses to young people,” Hussain said during his prepared remarks to the committee.

Hussain, born in Wyoming to Indian parents and raised in Texas, is a Hafiz, or person who has memorized the entire Qur’an.

Hussain vowed to ensure that religious freedom issues would never be sacrificed in diplomatic or economic negotiations with China.

“China is one of the worst abusers of religious freedom in the world,” Hussain said in response to a question about America’s response to the Uyghur genocide. Hussain called for increased US pressure on China to alleviate the suffering of not only the Uyghurs but Tibetan Buddhists, Chinese Christians, and members of the Falun Gong religious movement.

He suggested that America should encourage Muslim-majority nations to protest China’s treatment of its Muslim population, suggesting such a strategy would have a “significant chance” of making an impact and helping the lives of people in China.

As the OIC special envoy and in other roles, Hussain gained experience in interfaith diplomacy. He oversaw the Marrakech Declaration, an effort to ensure protections for Christians and other minority religious groups in OIC member states.

“A staggering 80 percent of people worldwide live in environments with high or severe restrictions on religious freedom,” Hussain told the Senate committee.

He also vowed to continue the work of his predecessor, Ambassador Sam Brownback, nominated by President Donald Trump, vowing to continue to build the International Religious Freedom or Belief Alliance. The intergovernmental arrangement involving 27 countries was the signature initiative of Brownback’s tenure in the office.

“In the history of this position, no ambassador has brought the breadth of policy knowledge that Hussain brings,” wrote Princeton University professor Robert P. George and former IRF ambassador Rabbi David Saperstein in an op-ed for RNS. They highlighted the support for his nomination from the Ethics and Religious Liberty Commission of the Southern Baptist Convention and from the Baptist World Alliance, as well as from Jewish groups.

Christian leaders advocating for international religious freedom have applauded his nomination and encouraged the Senate to confirm him to the position.

“As the first Muslim to serve in this role, Hussain would send a strong signal rejecting despicable anti-Muslim discrimination, stereotyping and hatred that we have seen in America and abroad,” wrote Bob Roberts, a Texas pastor and multifaith ministry leader, and Chris Seiple, president emeritus of the Institute for Global Engagement, in a column for the Dallas Morning-News last week.

“And, we should note, he is the perfect person to visibly and vocally defend the rights of religious minorities, especially Christians, in some Muslim-majority contexts that have struggled to promote religious freedom—as we have witnessed him do throughout his career.”

US Senate confirms Rashad Hussain as Ambassador at Large for Religious Freedom on December 17, 2021.
expand