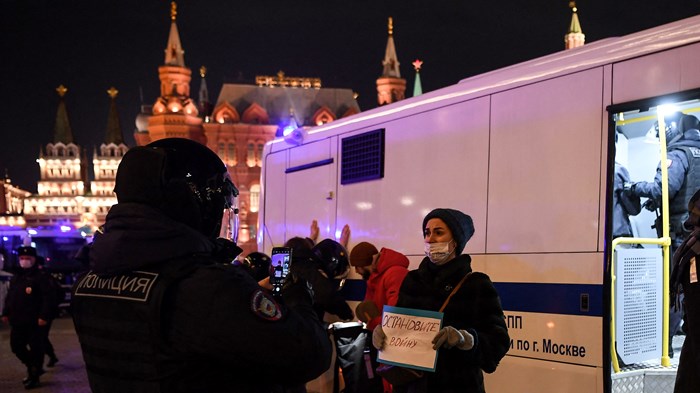 Image: Contributor / AFP / Getty Images
A woman holds a "Stop the war" placard in central Moscow during a protest against Russia's invasion of Ukraine, on March 3, 2022.

Ukrainian evangelicals have had enough.

Battered by a week of war, they have heard numerous prayers for peace uttered by their Russian colleagues. But they did not hear condemnation.

“Your unions have congratulated Putin, giving thanks for freedom of belief,” said Taras Dyatlik, the Overseas Council regional director for Eastern Europe and Central Asia. “The time has come to make use of that freedom.”

As Kyiv, Kharkiv, Kherson, and other cities have suffered missile strikes, the United Nations reports the death of more than 200 civilians. Ukraine’s State Emergency Service reports more than 2,000. The military casualties are disputed, with both nations claiming thousands of fatalities among the other’s ranks.

But rather than focusing on the numbers, Dyatlik, who coordinates a regional network of dozens of Protestant seminaries, turned to the Bible.

“Remember Mordechai and Esther,” he wrote March 1 in an open letter. “Do not be like Jehoshaphat, who entered into an alliance with Ahab, and was silent when God spoke through the prophet Micaiah.”

Dyatlik accused his Russian colleagues of buying into national rhetoric—first in 2014, when Russian-backed forces invaded the eastern region of Donbas—and again today. But “begging on my knees,” he leveraged his reputation with the heads of Russia’s evangelical unions—while acknowledging their difficult reality.

Recently passed amendments to the Russian criminal code establish up to a 15-year prison sentence for “fake” claims about the violence in Ukraine, as authorities crack down on Russians who call the “military operation” a “war.”

Discrediting the armed forces can now result in three years in prison; calling for anti-war rallies could merit five years. Based on level of severity, such actions by Christians and other Russian citizens risk fines and compulsory labor.

Dyatlik was not the only one frustrated. But instead of drawing from Scripture, his colleague Valerii Antoniuk appealed to history.

“Where are your Bonhoeffers, where are your Barths?” asked the head of the All-Ukrainian Union of Churches of Evangelical Christians-Baptists. “Your silence now is the blood and tears of Ukrainian children, mothers, and soldiers—that is on your hands.”

“Many believers in Russia are praying about the ‘situation’ in Ukraine. The situation is called WAR,” the pastor of Word of Life church in Boyarka, 15 miles southwest of Kyiv, wrote on Facebook. “And when you pray again, tell God it’s war, and we are being killed here.”

As of publication, more than 300 Russian evangelicals had reportedly received the message.

“The time has come when each of us must call things by their real names, while we still have a chance to escape punishment from above, and prevent the collapse of our country,” stated an open letter signed by a group of Russian pastors and other Protestant leaders. “We call on the authorities of our country to stop this senseless bloodshed!”

Their message was also biblical.

It quoted Jeremiah 18:7–8, that the nation that turns from its evil ways will be spared.

It referenced Cain committing the sin of fratricide against his brother Abel.

And it called for their nation to implement the words of Jesus: “Put your sword back in its place … for all who draw the sword will die by the sword” (Matt. 26:52).

“They literally are risking their lives,” he said. “But they show their love to the Lord and his body: we are one in the Spirit.”

The open letter is available on the website of Mirt Publishing House, a small evangelical publisher in St. Petersburg, and is signed by mostly Russian Baptists and Pentecostals affiliated with churches or seminaries in Moscow, St. Petersburg, and more than 40 other cities.

[Editor’s note: The petition was closed after gathering 400 signatures within two days.]

“This is an extraordinarily courageous step compared to evangelical timidity previously under Putin,” said Mark Elliott, editor emeritus of East-West Church Report, a journal focused on explaining Eurasian Christianity to Christians in the West for 29 years. “I am amazed and heartened that these brave people are defending Ukraine. They will suffer for this unless Putin is dethroned. Lord have mercy.”

“The letter is not a typical reaction by Russian Protestants. Staying away from politics has been their primary stance for decades,” said Andrey Shirin, a Russia-born Baptist seminary professor in Virginia. “They have been routinely accused by Soviet authorities of being anti-government. In response, they said they were believers, not politicians.

“Many Russian Protestants are maintaining this stance in the current conflict,” he said. “But some desire greater social involvement, and the tragedy developing in Ukraine has struck a raw nerve.”

One cosigner, however, pushed back against the expectation that all Russian Christians must do likewise.

Alexey Markevich, one of nine Russian Protestants to officially sign the letter before it was circulated publicly, said not everyone needs to be a Bonhoeffer.

“The church’s first calling is the proclamation of God’s Word … [and] this proclamation happens in many different ways: pastors preach, theologians write, philanthropists give out bread, people weep with those who weep, activists take to the square,” he said. “It is important for each of us to see our calling and fulfill it honestly before God, serving him and people.”

Moreover, Bonhoeffer and other famous figures who struggled against evil, while models of faithfulness in themselves, do not directly apply to the demands Ukrainians are making of Russians today.

“Their examples are important and relevant to us,” said Markevich. “But [they did not go] out to picket, and [Bonhoeffer] did not conduct any public activity.”

It would be difficult to achieve results through such actions, in his view. Evangelicals in Russia have no political influence to stop the war, whether they write letters or fill the city squares. Some will still try, as Markevich said he has done since 2014. But true power lies elsewhere.

Though with less risk but still significant ecclesial cost, some Moscow-affiliated Orthodox priests in Ukraine are calling on their local bishops to disavow Patriarch Kirill of the Russian Orthodox Church.

“This unprecedented … wrenching tragedy that has been ignited by the malignant conspiracy and malicious inaction of a person whom we cannot recognize as our patriarch,” stated 10 priests in the Cherkasy diocese of the Ukrainian Orthodox Church (UOC), 120 miles southeast of Kyiv, in a joint statement.

“We demand the severance of all relations with the Russian Orthodox Church, and the restoration of eucharistic communication with the ecumenical patriarch.”

In 2019, the Istanbul-based ecumenical patriarch of the Orthodox Church, Bartholomew I, recognized the national independence of the breakaway Orthodox Church of Ukraine (OCU). Many parishes in Ukraine rejected this and chose to remain under the Moscow patriarchate, as has been historic precedent. (Exact figures for OCU- and UOC-affiliated churches in Ukraine are difficult to determine.)

But now bombed by Russian forces, the ten priests addressed their letter to Metropolitan Onufriy, the UOC leader, and demanded that their local bishop break ties with Kirill.

They also were biblical, referencing Esther and Proverbs 24, which oblige the believer to not pretend ignorance but to rescue those who are facing death.

“We will find the strength to stand not with weak-minded people,” they stated, “but with Christ, who is our true pastor, father, and protector, to whom be the honor and glory for all time. Amen.”

Their action was followed by the UOC priests of Lviv, which became the first diocese to unanimously call to break with Moscow.

“Today the masks are off. It is obvious to everyone that behind the words about brotherly love and the creation of a single spiritual space of the ‘Russian world’ was a man-made desire to bury and ignore the free and God-loving Ukrainian people,” they said in their statement, comparing Putin to the biblical Cain.

“Staying in prayerful and eucharistic unity with the Moscow Patriarchate … makes the UOC faithful look like enemy collaborators, and traitors.”

The world sees a similar reality.

The United Nations General Assembly voted 141–5, with 35 abstentions, to condemn Russia and call for an end to hostilities. Only Belarus, Syria, North Korea, and Eritrea joined Russia in opposing the measure.

Sergei Ryakhovsky, head of the Russian Union of Christians of Evangelical Faith, one of the two largest Pentecostal associations in the country, was quoted in Vzglyad, an online Russian newspaper, as praying for the “Russian military operation”—Putin’s preferred terminology—to end by Easter on April 24, as well as noting John the Baptist’s defense of soldiers.

“Any Christian of any denomination is against violence,” he said, according to the Vzglyad article. “But at the same time I understand that peace is achieved by different methods, including force, as in this situation.”

Ryakhovsky later denounced the interview as fake in an Instagram story post. “Dear brothers and sisters, if in the near future you will read in the press my quotes about Ukraine, know that they are fake,” he posted Friday.

Many analysts are predicting a drawn-out conflict.

“Most likely, the occupiers will only increase their efforts, destroying our country and lives,” said Roman Soloviy, director of the Eastern European Institute of Theology in Lviv. “Therefore, we cannot give up. … Amid chaos, pain, and death, we must remain God’s instruments of comfort, help, and hope.”

And some of that has now come from Russia, even as its government has moved to censor its media. Liberal news sources Dozhd and Ekho Moskvi were recently shuttered. But some evangelical leaders continue to speak.

“No political interest or goal can justify the deaths of innocent people,” the open letter stated. “War destroys not only Ukraine, but also Russia—its people, economy, morality, and future.”

Editor’s note: This article was updated on Friday, March 4, to note Sergei Ryakhovsky’s Instagram statement that his interview in Vzglyad is fake.