The successor to Paige Patterson cites “reputational, legal, and financial realities” as he moves on to an IMB role.
Kate Shellnutt|September 23, 2022 03:00 PM 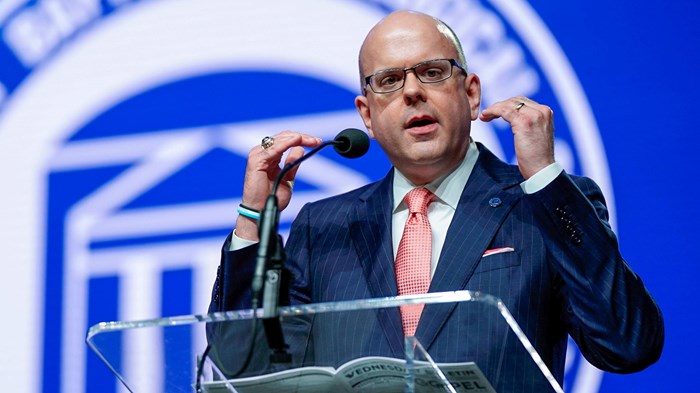 Adam Greenway has resigned as president of Southwestern Baptist Theological Seminary three and a half years after he succeeded fired president Paige Patterson.

Greenway stepped down during a trustee meeting on Thursday and will take a role at the Southern Baptist Convention (SBC)’s International Mission Board, according to a statement from the seminary.

O. S. Hawkins, retired president of the SBC financial services entity GuideStone, will lead the school in the interim. (Update: On September 27, the trustees adjusted plans to have David Dockery—who was a theology professor and special consultant to Greenway—serve as interim president and Hawkins as senior advisor and ambassador-at-large. Dockery was previously president of Union University and Trinity International University/Trinity Evangelical Divinity School.)

Greenway said in a statement:

These days are incredibly challenging in the life of our denomination. They are also challenging times for academic institutions, particularly theological seminaries. In February 2019, Carla and I accepted the call to come back “home” to Southwestern Seminary with an understanding of these challenges, but also with the strong desire to be part of the solution.

What we failed to appreciate was the enormity of the reputational, legal, and financial realities that would welcome us to the Dome—only to be compounded by a global pandemic unlike anything we have ever experienced before.

We have done our best to serve Southern Baptists by helping position our seminary for the future, but much, much work remains to be done. Nevertheless, in the Providence of God we sense a release from our duties here.

Since assuming the presidency at Southwestern, Greenway worked to establish a new era at the Fort Worth, Texas, school, removing stained glass windows commemorating Patterson and other Conservative Resurgence leaders from the school’s chapel and initially making cuts to “recalibrate.”

It hasn’t been a quiet tenure. On top of ongoing litigation around Patterson’s response to abuse, disputes with the previous leadership at Southwestern lingered under the new administration. Last year, the seminary sued to restore donations that were diverted away when Patterson left and called out the former president for taking its property.

At the start of the pandemic, Southwestern cut programs, laid off faculty and staff, and pulled from its endowment for budgetary reasons. Some of the departures have been contentious, including longtime preaching professor David Allen, who left this year.

But in Greenway’s report to the convention at the 2022 annual meeting, he did not indicate any financial woes. Instead, he said, “The Lord is blessing Southwestern Seminary and Texas Baptist College in many ways. The Lord is indeed doing a marvelous work on Seminary Hill.” Greenway announced two fully funded endowed chairs at $2 million each.

According the SBC Book of Reports, Southwestern’s budget grew from $32.6 million during the first year of Greenway’s presidency to $37.3 million for this school year. The school more than doubled its revenue from its endowment, up to $4 million, while also tripling its revenue from private gifts, up to $3.7 million.

At Greenway’s previous post at Southern, he grew enrollment as dean of the school of evangelism. He has graduate degrees from both Southern and Southwestern, where he met his wife.

“In a time where there are voices wanting to sow seeds of discord and disunity and dissension and division all across our landscape, I want you to know that your seminary in Fort Worth, Texas, desires to be an instrument of healing and reconciliation, of Gospel-advance, working to bring people together under a ‘big-tent’ vision of commitment to a high view of Scripture, confessional fidelity, the Great Commission, and cooperation,” Greenway told the SBC in 2021. “This vision was the heartbeat of our founder, B.H. Carroll, and we remain steadfastly committed to seeing that vision fulfilled in our day.”

He said he sees his new position at the International Mission Board as “not a departure from but a continuation along the journey God has always had us walk.”